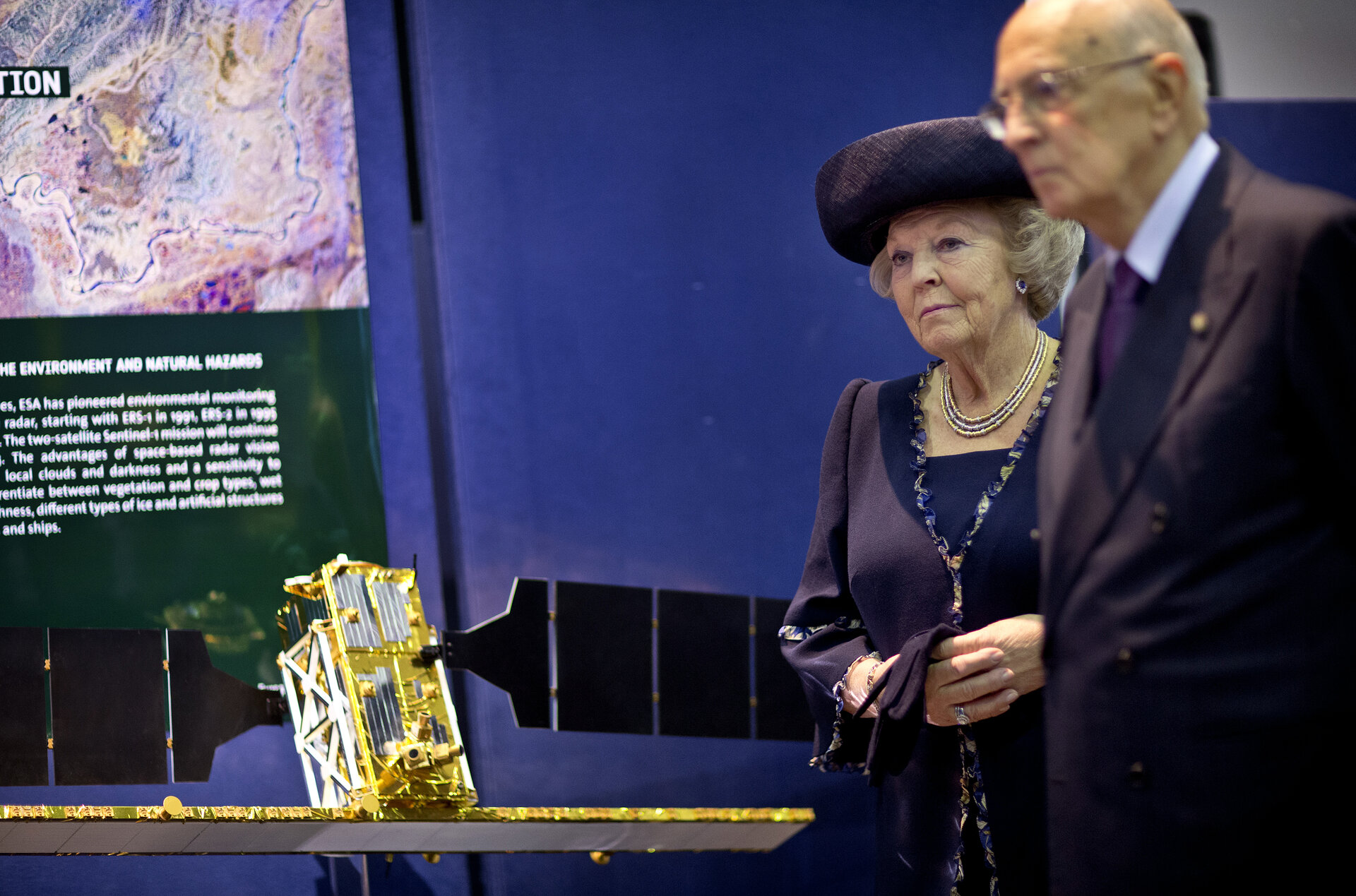 As part of the Italian State visit to the Netherlands, Her Majesty Queen Beatrix of the Netherlands and Italian President Giorgio Napolitano toured ESA’s space research and technical centre on Wednesday.

“It is a true honour for me to be here today and it is a privilege to be able to guide you through a place where European excellence is portrayed at its best,” said Mr Dordain.

“ESTEC is the technical heart of ESA, and there is no better place in Europe where one can see what space can do for the benefit of European citizens."

“We can be proud of what we are able to do in Europe, in Holland, in Italy, in all 19 Member states of ESA, and you can be as proud as I am of all these people and their competences.”

From rocket science to satellites

A range of programmes was presented to the visitors: ESA’s new Vega small launcher, the CubeSat satellites, ExoMars, Earth observation data to monitor the environment and manage natural hazards, Iris for managing air traffic, the Miramap company from one of ESA’s Business Incubation Centres, and the BepiColombo and CryoSat missions were featured.

ESA astronauts André Kuipers and Luca Parmitano talked about training for space and living in space. Astronaut Samantha Cristoferetti sent a recorded video message from Star City in Russia, where she is training for her mission to the International Space Station.

On the eve of the visit to ESTEC, Queen Beatrix and President Napolitano gave speeches during the official State dinner. Queen Beatrix highlighted European cooperation in science, saying, “In these times of globalisation and worldwide competition, European countries on their own are no longer able to participate successfully in developments in the fields of science, technology and industry.

“However, it is exactly in these areas that European cooperation has led to many significant results. A good example is the European Space Agency, with ESTEC in Noordwijk as its largest site, which you will be visiting tomorrow.”

President Napolitano stressed the close historical ties between the Netherlands and Italy and Europe’s leading role in science and technology, and said, "Your Majesty, for a long time our histories have overlapped and our peoples and cultures have blended [...] In the 17th century, Galileo Galilei taught the world how to utilise the telescope that had been invented on Dutch soil.

"Guest of the homeland of free thought, he published his scientific and philosophical testament in Leiden, in 1638. The tradition of researching the Universe continues today with our leading engineers and scientists at ESTEC.”