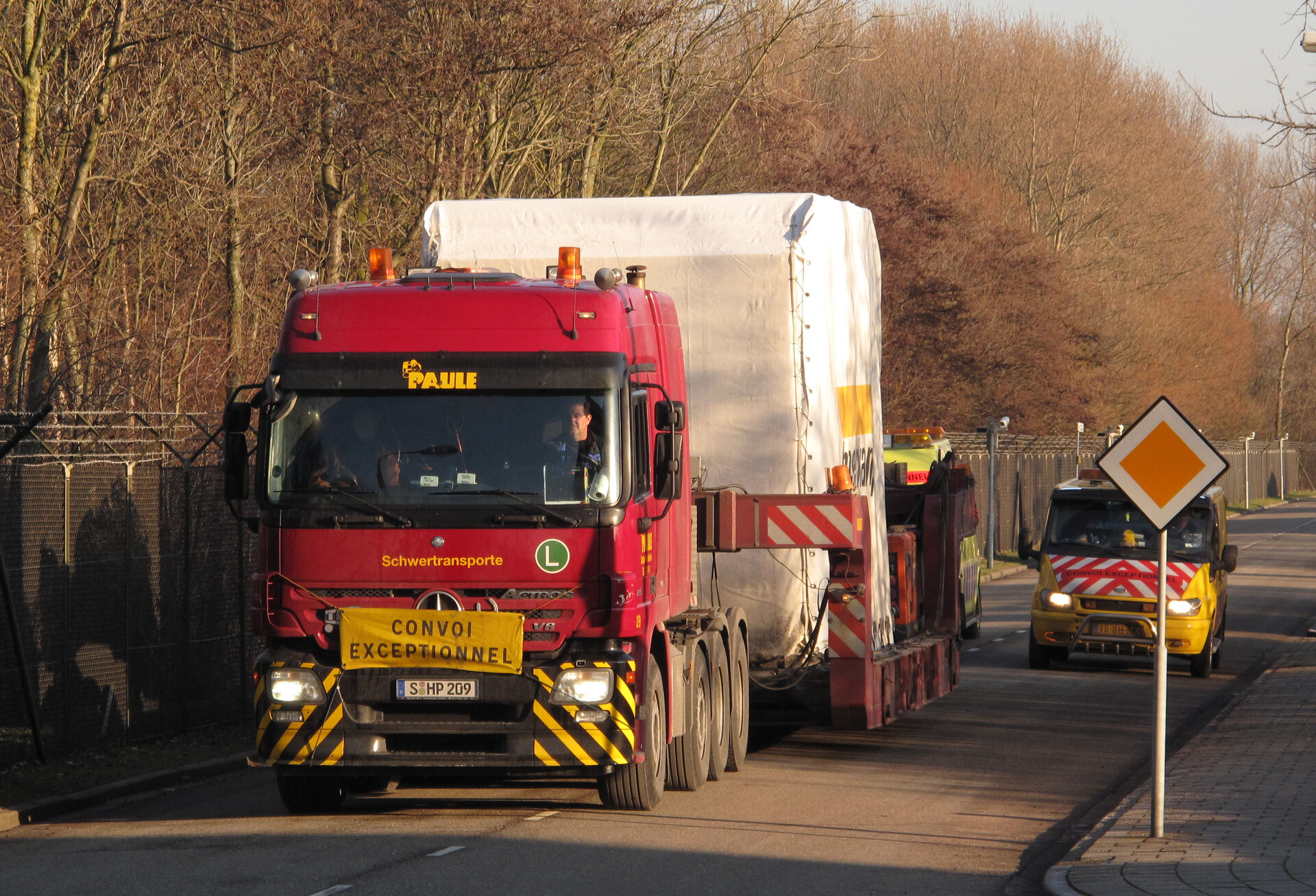 One of the most thrilling scientific instruments ever built, the Alpha Magnetic Spectrometer (AMS) arrived today at ESTEC for exhaustive testing before it will be lofted to International Space Station (ISS) with Space Shuttle next July. Quest for the composition of the Universe is about to take a step further in ESA’s Large Space Simulator care of the ESA Directorate of Human Spaceflight.

The simulator, located in ESA’s research and technology centre ESTEC, at Noordwijk in the Netherlands, is used to test satellites and spacecraft before they are sent to space. The large vacuum chamber, complete with bright Sun and walls cooled by liquid helium, can reproduce conditions in open space as closely as it is possible, and different shakers, acoustic chambers and electromagnetic test station are used to mimic other conditions during the launch and operation in space.

Even if the Large Space Simulator has seen all kinds of space hardware, the AMS detector will be something special: it is not only the biggest scientific instrument to be installed to the ISS, but also the first magnetic spectrometer in space, with the largest cryogenically cooled superconducting magnet ever used in space.

Made mostly in Europe, assembled at CERN...

The AMS detector has been built mostly by European institutes in Italy, France, Germany, Portugal, Spain and Switzerland together with the participation of China, Russia, Taiwan and US. It has been integrated at CERN, where the collaboration has built and operated a special facility. From 4 February until last week, the detector was put through its paces using a proton beam from CERN’s Super Proton Synchrotron accelerator to check its momentum resolution and its ability to measure particle curvature and momentum.

AMS’s ability to distinguish electrons from protons was also tested. This is very important for the measurement of cosmic rays, 90% of which are protons and constitute a natural background for other signals that AMS scientists are interested in. AMS will be looking for an abundance of positrons and electrons from space, one of the possible markers for dark matter.

With over 300,000 data channels, the detector gathers an extremely large amount of data which is then processed and sent to Earth utilising the ISS power, communication and data infrastructure.

… tested and qualified in ESTEC, Europe

A special convoy carrying the experiment travelled from Geneva to Noordwijk in the Netherlands in six days and rolled in to the simulator building this morning. Twenty members of the AMS collaboration accompanied the detector on its journey.

"I just saw masterpieces of European technology taking off and being installed onboard the ISS as I attended the launch and followed the mission of Shuttle Endeavour with Node-3 and Cupola" says Simonetta Di Pippo, ESA Director of Human Spaceflight. "For all AMS represents to me as a physicist, as the responsible for human spaceflight in Europe and as European citizen, I couldn't wait to see it coming through the ESTEC gate, undergo the testing and head towards Kennedy Space Center to find its place on Shuttle and later on the ISS."

AMS is due to leave ESTEC after extensive testing at the end of May aboard a special US Air Force flight to the Kennedy Space Center in Florida. It will be launched to the ISS aboard the Space Shuttle Endeavour on flight STS-134, now scheduled for July.

"Europe contributed to a large extent to the design and development of AMS and the mission will be even more special to Europeans as an ESA astronaut, Roberto Vittori, will be flying on a flight opportunity by ASI together with AMS," concludes Di Pippo. "We are going through exciting moments and we move from one accomplishment to the other. The best way to pave the way to the ISS extended operations through 2020 and beyond."