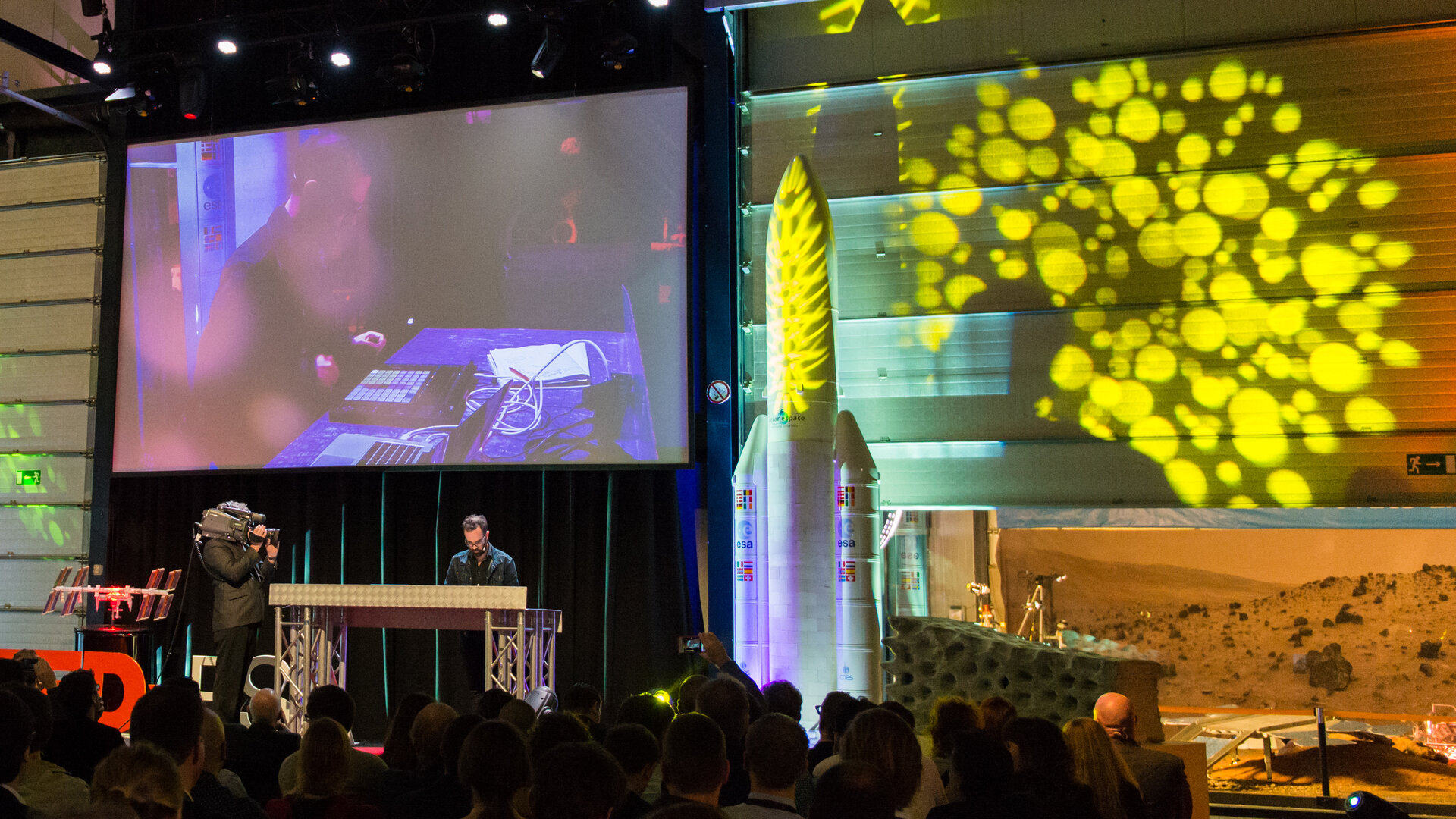 Ideas worth spreading, from the technical heart of Europe’s space sector – last night marked ESA’s first TEDx event, opening the worlds of technology, business and art to the online world.

TEDx events follow the original ‘Technology, Entertainment, Design’ template: concise talks about inspiring ideas that have been watched online more than a billion times within the last decade.

Appropriately enough for the venue at ESA’s research heart in the Netherlands, the theme of “Science beyond Fiction” focused on how imagination leads the way to promising ideas and winning opportunities, helping to build our collective future.

Where are the dreams of today steering us? A stellar perspective was provided by a science fiction author, technology entrepreneurs, an artificial-intelligence researcher, a pair of astronauts – and even a chef.

No matter where we roam, everything comes back to food, noted ‘Nordic Alchemist’ Thorsten Schmidt, recounting the raised significance of food to isolated social groups.

Well known from Denmark’s Malling & Schmidt restaurant, he explained how he faced the challenge of preparing orbital rations for Danish ESA astronaut Andreas Mogensen, meals to stay edible for six months without freeze-drying and be delicious in taste-dulling weightlessness.

Also taking the stage was Italian ESA astronaut Samantha Cristoforetti, who returned to Earth from the International Space Station in June, having set a record for the longest-staying female astronaut in space: “As a child I dreamed one day of being part of a spaceship crew – and it came true.”

Samantha symbolises a big difference between today’s world and yesterday’s prophecies: women are taking a leading role in exploration and discovery.

Exploration is under way, but has ended up looking very different from the science fiction visions of old. Who could have predicted that the first landing on a comet – by Rosetta’s Philae lander, a year ago today – would be followed in real time by millions worldwide via social media?

Or, indeed, that the same sensor technology sniffing out the comet’s chemical makeup would be turned to detecting bedbug infestations in hotels? Chemist Geraint Morgan and alumnus of ESA’s business incubator in the UK explained how his experience from working on a key Rosetta instrument has helped him to establish innovative terrestrial companies.

This exchange of technologies between Earth and space is a two-way process. For example, the same 3D printing technology revolutionising manufacturing on Earth could also open up space exploration, including the prospect of building a Moon base from local materials.

Space activist and entrepreneur Rick Tumlinson made an impassioned plea for people to “come out of the airlock” on their love of space, and help enable an inspiring future where space missions could shepherd life to now-dead worlds.

To close the evening, musician Peter Kirn took sounds gathered from ESA’s space missions, testing facilities and TEDxESA itself as the basis of a danceable DJ set: “Sound is an important part of how space scientists, space explorers do their jobs – our ears are incredible instruments.”

With Samantha as a speaker and Dutch ESA astronaut André Kuipers hosting the evening, a third ESA astronaut turned out to be present in the audience: Frank De Winne, head of the European Astronaut Centre, announced his establishment in Cologne, Germany, would host TEDxESA in 2016.

For those who missed the livestream, remember to follow the @TEDxESA Twitter feed, as the speaker videos will be made public in the weeks and months ahead.