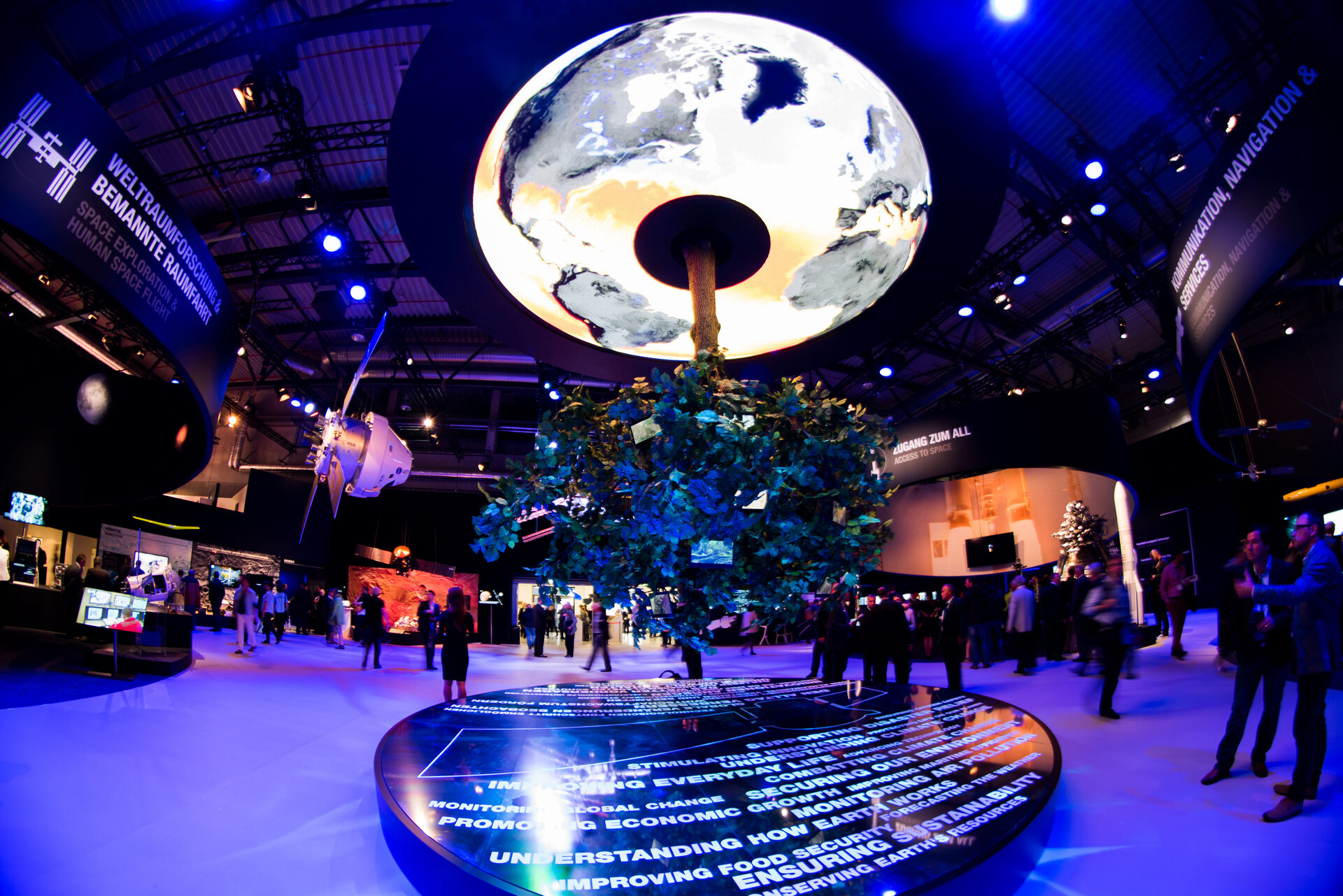 ESA will be exhibiting in the ‘Space for Earth’ pavilion at ILA, the Berlin Air and Space Show on 1–4 June.

ILA is one of the world’s largest aerospace trade shows, bringing together the international aerospace community, industry, space agencies and trade visitors interested in discovering the latest aerospace developments and new business opportunities.

The space pavilion in Hall 4 in conjunction with the German Federal Ministry for Economic Affairs and Energy, the DLR German Aerospace Center and the German Aerospace Industries Association will feature the wealth of ESA and German national programmes across all space domains, focusing on recent mission results and upcoming launches.

Ariane 6 is set to debut in 2020. A large-scale model of this new launcher will be on show at the entrance to the pavilion. Ariane 6 is being developed in parallel with Vega C, a more powerful version of the small Vega rocket. This will maximise the use of common technologies, processes and equipment, allowing Europe to maintain its competitiveness in this fast-changing and strategic sector in the coming years.

ESA will also present Europe’s current family of launchers operated from Europe’s Spaceport in French Guiana: Ariane 5, Soyuz and Vega, which offers a complete range of services and capabilities.

ESA’s IXV spaceplane will be on show in the area dedicated to technologies for future launch vehicles. The fully controlled blazing reentry from orbital velocity and altitude of the Intermediate eXperimental Vehicle in 2015 was an important first for Europe. The next step is Pride, the Programme for Reusable In-orbit Demonstrator for Europe, also on display.

Visitors to the pavilion can learn more about space-based services for aviation via EGNOS, the European Geostationary Navigation Overlay Service, which has been operational since March 2011. Europe’s Galileo satellite navigation constellation, with 18 satellites planned to be in orbit by the end of this year, is explained in a special audiovisual display. Once complete, the system will consist of 24 operational satellites and the ground infrastructure for the provision of positioning, navigation and timing services.

The Telecommunications exhibit will feature EDRS-A launched in 2016, the SmallGEO platform that will fly Hispasat 36W-1 in the next few months, and Electra, which will develop a full electric-propulsion telecom satellite in the 3-tonne launch mass range – a first for Europe.

ESA supports the development of such innovative satellite systems and technologies, via public private–partnerships with satellite operators and industry, sharing expertise and risk to open up new markets. An overview of these missions, services and applications will be presented in a special audiovisual display.

The area will also allow a closer look at the EDRS, the European Data Relay System, a SpaceDataHighway network of satellites and European ground stations that will provide near-realtime high-speed transmission of large volumes of data from low-orbit Earth observation satellites and the International Space Station, thanks to innovative laser technology.

The partners in the Space Pavilion will present images and services from the series of Sentinel satellites launched under the ambitious EU Copernicus initiative. This will benefit Europe’s citizens by providing decision-makers with access to accurate, timely information to manage the environment, understand and mitigate the effects of climate change, and ensure civil security.  With four Sentinels now in orbit Copernicus services will have faster access to data, generating more information for a broader user community.

ESA and Eumetsat have improved weather forecasts and climate studies with the Meteosat and MetOp series. Data from these satellites will be displayed alongside future generations already under development.

Results from four Earth Explorers already launched are also on show. Employing breakthrough technologies, these novel missions provide the scientific community with the means to study how the atmosphere, biosphere, hydrosphere, cryosphere and interior are intrinsically linked, and the effect of human activity on Earth’s natural balance.

The Earth Explorers are advancing our understanding of how Earth works and contributing essential climate variables to study climate-change issues.

The exhibition will highlight how breakthroughs in technology and science have brought us greater knowledge of the Universe, of our planet and its unique place in the Solar System.

A special area will be dedicated to ESA’s ground-breaking Rosetta mission that travelled deep into the Solar System to rendezvous with Comet 67P/Churyumov–Gerasimenko. In 2014 it became the first ever spacecraft to orbit and land on a comet. It is now providing scientists with unprecedented data to help understand if these mysterious objects brought life to Earth.

Because of its physical similarities with Earth, Mars is a primary target for the search for life in the Solar System. Very special guests in the Space Pavilion will be scale models of the three elements of ESA’s ExoMars missions in cooperation with the Russian space agency.

Launched in March 2016 the ExoMars Trace Gas Orbiter is well on its way to rendezvous with the Red Planet, where its Schiaparelli lander will demonstrate the technology needed to make a controlled touchdown on the planet, in October this year.

A wealth of scientific data come from innovative experiments carried out on ESA’s Columbus and other laboratories of the International Space Station. The ILA Pavilion will highlight cutting-edge technology developed in Europe, particularly Germany, now flying on the Station. ESA astronaut Alexander Gerst was recently assigned a new mission to the Station, where he will fulfil the role of commander during the second part of his six-month mission in 2018. This will reinforce the importance of Europe’s role in this unique international partnership. Many of the experiments that he carried out during his Blue Dot mission in 2014 will be on display at ILA.

A model of the European Service Module for Orion, NASA’s next-generation spacecraft that will send astronauts on exploration missions beyond the Moon, will be displayed alongside Europe’s Automated Transfer Vehicle (ATV) supply vessel to the International Space Station. The module is relying on technologies developed for ATV. Sitting below the crew capsule, it will provide propulsion, power, thermal control, water and air.

In the coming years, humankind will make preparations to go beyond low Earth orbit. The Moon has long been a prime target for such exploration. In a special feature, visitors will be invited to give their opinions and ideas for technologies that will enable us to venture further into the Solar System.

Technology development lies at the heart of ESA’s activities, helping European industry to improve its competitiveness worldwide. Among many displays of innovative developments at ILA, in particular, ESA will show the Proba-3 mission that will demonstrate precision formation-flying techniques while studying the Sun’s outer atmosphere. The proposal for an Asteroid Impact Mission and e-Deorbit mission that will investigate technologies for future applications such as in-orbit servicing, exploration, sample return and debris removal will also be explained.

The Ground Segment is a crucial part of every satellite mission. It provides an indispensable interface between the spacecraft, the satellite operators and its end users. Visitors to the Space Pavilion will have the opportunity to learn to fly a satellite themselves on a satellite operations demonstration console.

Throughout the week, the space pavilion will host a number of presentations and events, including a dedicated Space Day conference on Thursday 2 June for invited guests and media.

ILA is open to trade visitors on 1–3 June, and to the general public on 3–4 June.