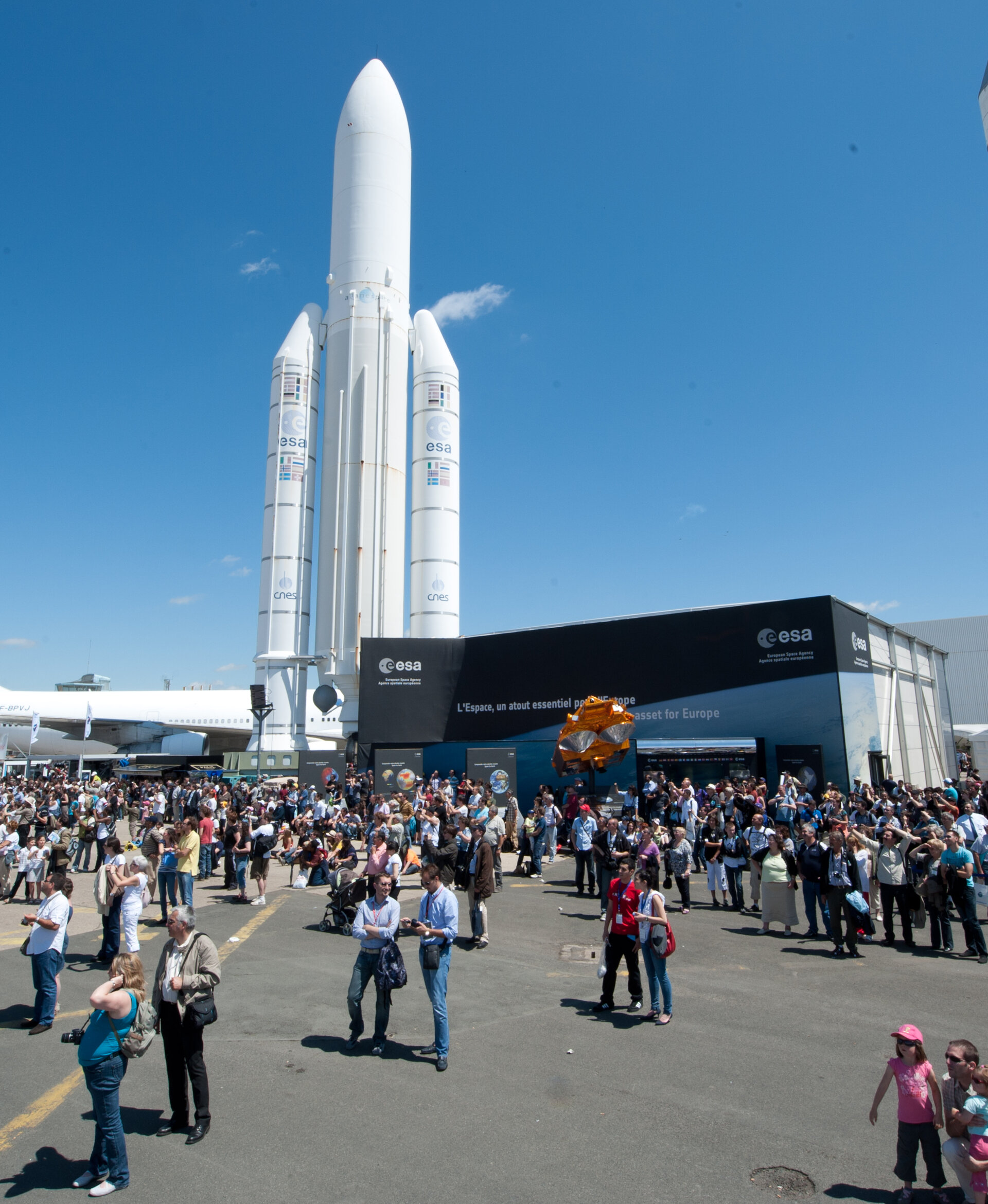 The 50th International Paris Air & Space Show at Le Bourget will open its doors on Monday 17 June. The Agency’s pavilion, situated between the full-size models of the Ariane 1 and Ariane 5 launchers, will feature the wealth of ESA programmes across all space domains, and focus on recent and upcoming launches and their results.

A full-size model of Alphasat, the largest and most sophisticated telecommunications satellite ever built in Europe, will sit in launch configuration in front of the pavilion. The first mission to use the Alphabus platform, it will be launched atop an Ariane 5 during the summer.

Alphasat and Alphabus are excellent examples of innovative public–private partnerships. ESA supports the development of satellite systems and technologies, opening up new markets for European industry by sharing expertise and risk in order to develop operational missions.

Technology development lies at the heart of ESA activities, helping European industry to improve its competitiveness worldwide. At Le Bourget, ESA will be showing some of the innovative and cross-cutting technologies currently flying on the latest satellites, Proba-V and ATV-4, along with others due to fly on the upcoming Alphasat, Gaia and Sentinel-1 missions.

In addition, ESA will present Ariane 5, Soyuz and Vega, the family of launchers operated from Europe’s Spaceport in French Guiana, offering a complete range of services and capabilities from the best launch site available in the world today.

The various proposals for new versions of Ariane and Vega, under study since the end of 2012 and aimed at maintaining European competitiveness in this key strategic sector, will also be prominently featured.

An impressive display will show the results from the Planck mission, the most detailed map ever created of the Cosmic Microwave Background – the relic radiation from the Big Bang.

Planck is providing the most accurate values on the age, composition and expansion rate of the Universe, and is painting a new picture that is pushing us to the limits of understanding current cosmological theories.

This month, ESA is also celebrating 10 years of its Mars Express mission with an exciting presentation of its many discoveries and the unveiling of a new map of martian mineralogy.

The three elements of the ambitious ExoMars exploration mission, to be carried out by ESA in cooperation with Russia’s space agency, will be presented on a dedicated Mars terrain.

Emphasis will be placed on the results gathered by the three Earth Explorer satellites already in orbit, addressing the most urgent questions facing Earth sciences: CryoSat is measuring the volume of Earth’s land and sea ice, GOCE is studying Earth’s gravity and SMOS is providing data on ocean salinity and soil moisture.

They will soon be joined by the Swarm constellation, which will carry out an unprecedented study of Earth’s magnetic field.

Along with many experiments that have been conducted aboard the International Space Station, including Europe’s Columbus laboratory, ESA will present a new and promising material derived from Station work. A titanium/aluminium alloy is set to reduce the mass of aircraft jet engine blades by 45%, bringing down the cost of flying and reducing the need for stopovers.

The docking of the fourth Automated Transfer Vehicle supply vessel, Albert Einstein, and the recent arrival on the International Space Station of ESA astronaut Luca Parmitano for a long-duration mission on behalf of Italy’s ASI space agency, will also be covered. They reinforce the importance of Europe’s role in this unique international partnership.

ESA has long worked in close cooperation with Eumetsat, improving weather forecasts and climate studies with the Meteosat and MetOp series, and new versions of both satellites are under study.

Data from both satellites will be displayed alongside examples of maps to assist disaster management authorities, produced under the International Charter on Space and Major Disasters.  ESA is one of the founding members of the Charter, a cooperation between space agencies from all over the globe that manage Earth observation missions.

With the first of the Sentinel series of satellites due to be lofted into space in the coming months, the ESA Pavilion will once again show GMES/Copernicus.

This ambitious EU initiative for the benefit of Europe’s citizens and decision-makers, provides access to accurate, timely information in order to manage the environment, understand and mitigate the effects of climate change, and ensure civil security.

There will be a special audiovisual feature to mark another first in 2013, when Europe determined a position on Earth using the first four satellites in its very own Galileo satellite navigation system.

Lastly, ESA will present the new Centres inaugurated this year as part of its Space Situational Awareness programme. This will give Europe the capability to obtain all the information it needs to protect its space and terrestrial infrastructures and to counter the risks from space debris, geomagnetic storms and asteroids.

A series of events will be hosted in the ESA pavilion during the week:
http://www.esa.int/For_Media/Press_Releases/Call_for_Media_ESA_at_Paris_Air_Space_Show