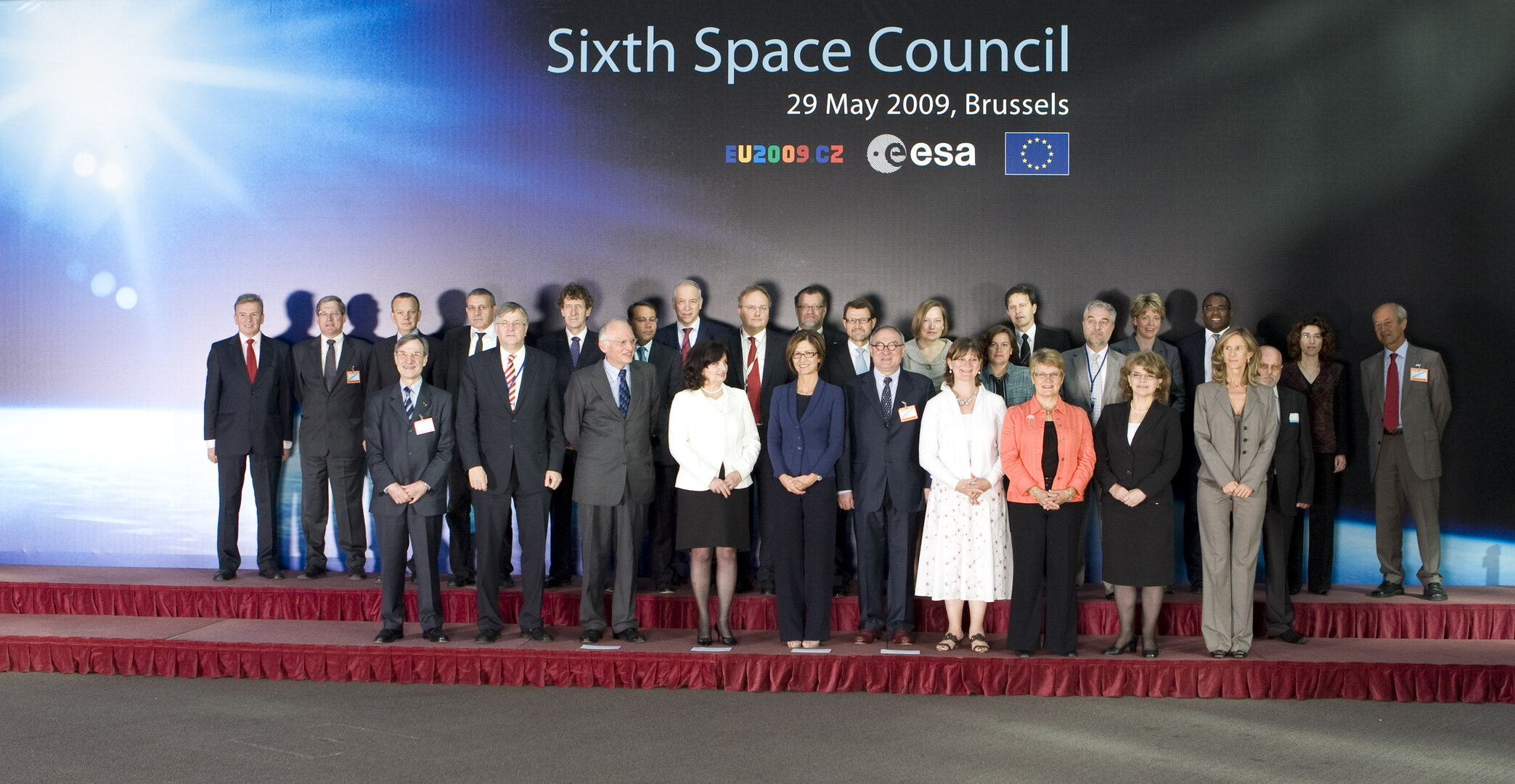 ESA PR 14-2009. Ministers in charge of space activities representing the Member States of the European Space Agency and the European Union met in Brussels today for the Sixth Space Council.

Today’s Council was jointly chaired by Miroslava Kopicová, the Czech Republic’s Minister of Education, on behalf of the EU Competitiveness Council, and Mariastella Gelmini, Italian Minister for Education, University & Research and current Chair of the ESA Council at Ministerial Level.

The Space Council recalled the outstanding results of the ESA Council meeting at Ministerial level of November 2008 and the EU Competitiveness Council conclusions regarding the GMES programme of December 2008, recognising the progress made on the increased coordination of space and security-related activities between key European Space Policy players.

Ministers called for action to mobilise existing innovation support mechanisms to ensure cross-fertilisation of innovation and ideas between space and non-space sectors, and between space industry, leading research organisations and universities. This followed the conclusions of the European Council of 11-12 December 2008 in support of the European Economic Recovery Plan and its call for the launch of a European Plan for Innovation which should also include space technology and services derived from it, as one of the main technologies of the future.

The Council specifically highlighted the potential of satellite communications technologies to bring broadband to European citizens and enterprises, ensuring better access to modern Information & Communications Technology, particularly in rural and remote areas, calling on the Commission, ESA, and the EU and ESA Member States to consider integrating satellite technologies in future broadband projects.

The Ministers underlined the importance of rapid implementation of the proposed EU Regulation on the GMES Initial Operations Programme and stressed the need to give funding priority to the operations of the GMES Space Component (GSC). On the long-term arrangements for the GSC, which covers the period from 2014 onwards, the need to define a sustainable funding approach was stressed. ESA and the Commission are requested to elaborate a funding strategy for the remaining elements of the GMES build-up phase.

Concerning observations related to operational oceanography and atmospheric composition monitoring, the Space Council invited the Commission and ESA to lead a dialogue with EU and ESA Member States and Eumetsat to coordinate the user requirements for space observations, while respecting ESA’s overall coordination role for the GMES Space Component. The Commission and ESA are asked to define the data policy for, and the ownership of, the Sentinel missions.

Furthermore, the ESA-prepared Long-term Scenario for the GSC was identified as a basis for evolution and cost estimates in order to establish an operational GMES programme from 2014 onwards.

On space exploration, the Ministers reaffirmed the need to assess the possibilities offered by EU policies to embed space exploration in a wider political perspective. They looked forward to the proposed High-Level Political Conference on Space Exploration – as previously agreed at Space Council level – as a first step towards the elaboration of a fully fledged political vision on 'Europe and Exploration' encompassing a long-term strategy/roadmap and an international cooperation scheme.

Ministers also welcomed the Commission’s initiative of studying options for future EU funding schemes and instruments for space-related programmes, which will provide important input for discussions about the next EU Multi-annual Financial Framework.

The Space Council is the joint and concomitant meeting of the EU Council and of the ESA Council at Ministerial Level, as defined in the Framework Agreement between the European Community and ESA which came into force in May 2004. It first met in November 2004, two meetings followed in 2005, one in 2007 at which the European Space Policy was adopted, and the fifth in 2008.

Under the Global Monitoring for Environment and Security (GMES) initiative, ESA has the role of development and procurement agency for the Space Component via the Sentinel family of satellites and for the related ground segment. ESA is also the coordinator for all data access to the Sentinels and other missions, essentially those run by its Member States and Eumetsat.