Ministers from ESA’s 20 member states and Canada today allocated €10 billion for ESA’s space activities and programmes for the years to come.

Ministers focused the investments on fields with high growth potential or with a direct and immediate impact on the economy such as telecommunications and meteorology. They approved ESA’s level of resources for 2013-17, the proposals for the domain of Earth Observation and confirmed Europe’s commitment to the exploitation of the International Space Station (ISS).

Ministers secured investments for the detailed definition studies of the new launcher Ariane 6 and the continuation of the development of Ariane 5 ME adapted, with the goal to develop as many commonalities as possible between the two launchers. These activities are funded for two years with a decision on the continuation of both launchers to be taken in 2014.

Ministers gave the green light for Europe to provide the service module of NASA’s new Orion Multipurpose Crew Vehicle (MPCV) as an in-kind contribution for ISS operations for 2017–20. This decision is strategically important for Europe as it will enable a cooperation between ESA and NASA on the future human space transportation system.

Ministers of ESA Member States approved a Political Declaration towards the European Space Agency that best serves Europe. In doing so, Ministers have initiated a process able to define how ESA can adapt its operations to take benefit of both, its intergovernmental framework and the EU competence in space. They have also stated their willingness to ensure coordination and coherence between the process initiated on the ESA side and the one initiated on the EU side. This Political Declaration was also supported by Ministers from 7 of the EU member States not yet members of ESA present at the meeting.

Ministers decided to hold the next Council at ministerial level in spring 2014. 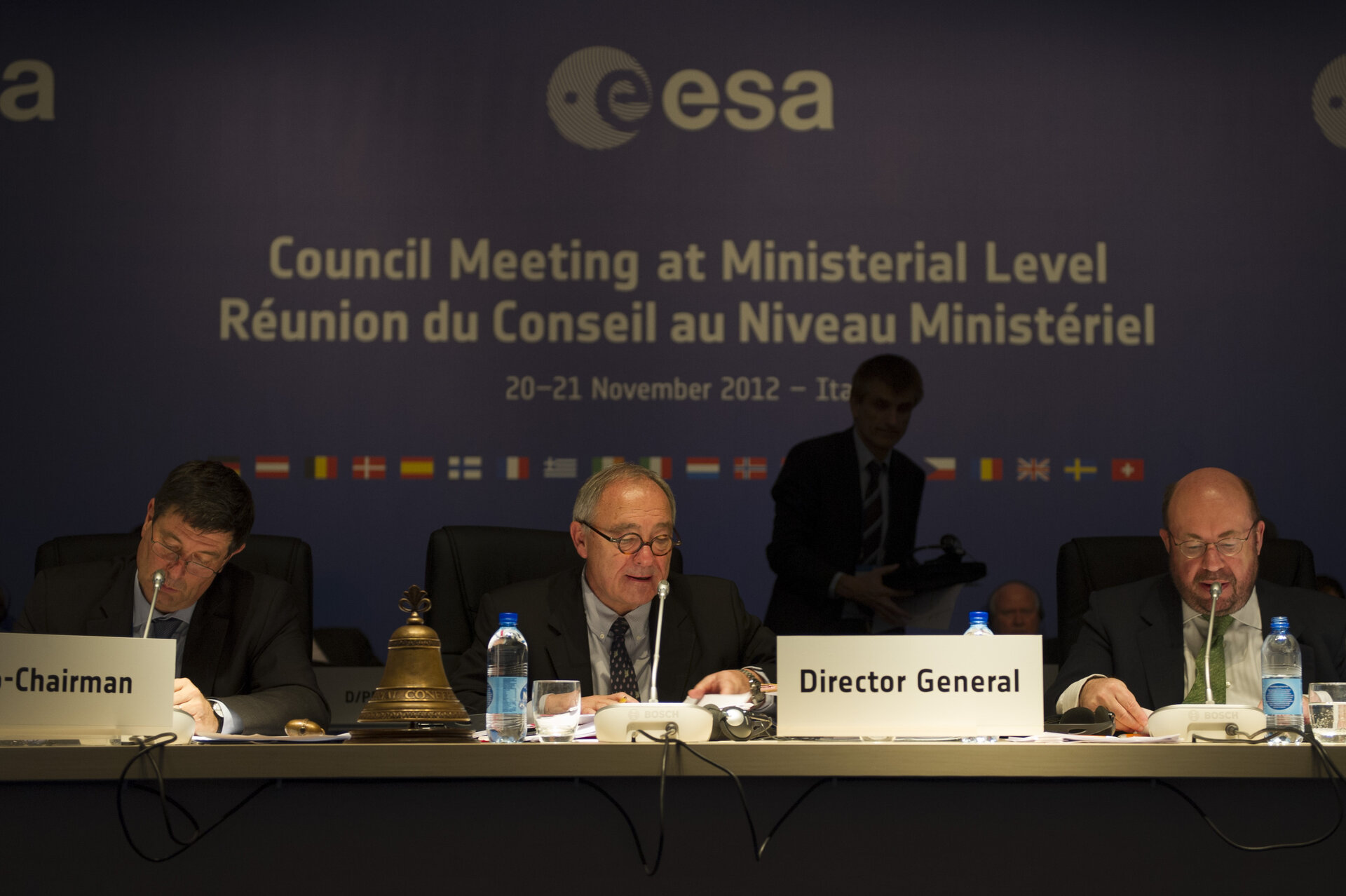 First, “On the role of ESA in sustaining competitiveness and growth” political and programmatic highlights of the Council;

Second, “Level of Resources for the Agency’s Mandatory activities 2013–2017” which cover the science programme and basic activities;

Third, the renewal of the contribution of ESA Member States to the running costs of the Guiana Space Centre, Europe’s spaceport in French Guiana; and

Fourth, the “Political Declaration towards the European Space Agency that best serves Europe.”

The last Resolution initiates a process for the further evolution of ESA. The objective is to capitalise on the competences and the achievements of ESA while taking full benefit of EU policies. The process will ensure the continued success of ESA as the research and development space agency for Europe, Member States and the EU.

The Resolutions will be made available on ESA’s website.

A dedicated website for the Council Meeting at Ministerial Level 2012 outlines in more detail the various proposals that were submitted to Ministers: http://www.esa.int/SPECIALS/Ministerial_Council_2012/