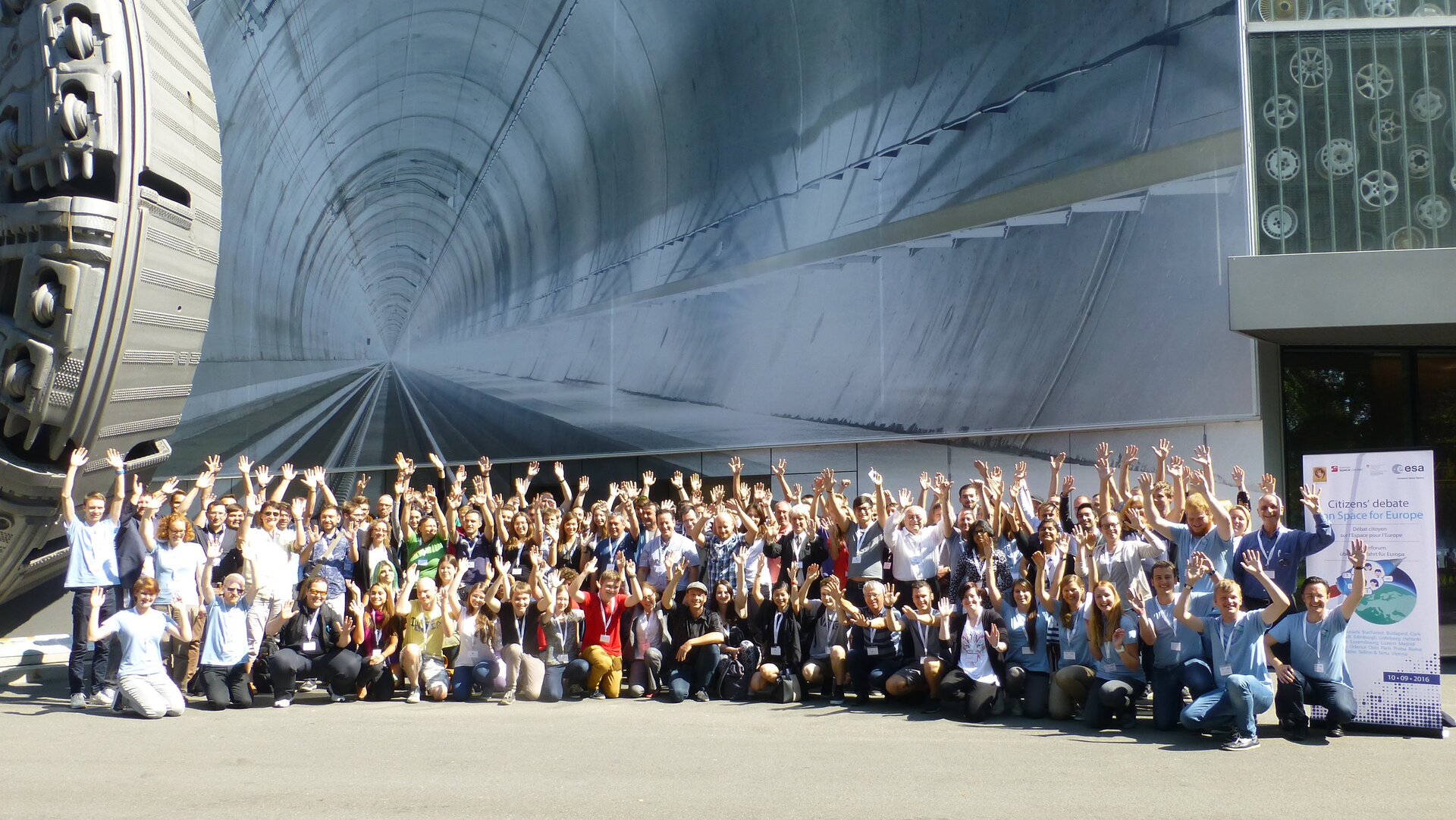 On 10 September, about 2000 Europeans helped to shape the future of space by taking part in a world first: the Citizens’ Debate on Space for Europe.

ESA organised the event to gather opinions and ideas to help develop and nurture the future strategy for space in Europe.

When Jan Woerner was elected as Director General of ESA by its Member States he expressed the wish to boost dialogue with all stakeholders and to open up space to a broader public. This Citizens’ Debate translated his intention into practice, by including people from all walks of life around Europe.

About 2000 people representing a broad diversity of citizens in 22 countries debated space issues during the day-long event.

This consultation exercise, on an unprecedented scale, was organised in all ESA Member States simultaneously, following the same approach.

In order to consolidate the 22 national results into one report at European level, the debates followed the same pattern and addressed the same questions. Although quantitative results were available soon after the debate, it required more time to analyse the qualitative results – in particular the creative session where participants were asked to imagine a space project for 2046 and 200 scenarios were proposed.

An entire day on space issues

Five sessions on “Space and me”, “Europe’s role in space exploration and exploitation”, “The global governance of space”, “Let’s go into space” and “Preparing the future of space for Europe” were each opened with a video before the debates. Participants then answered a set of standardised questions on each theme.

At the end, feedback from participants revealed a 92% rate of satisfaction with the exercise, and 95% considered that ESA should organise similar events in the future.

Thinking outside the box

According to the Space 4.0 strategy of ESA Director General Jan Woerner, it is crucial for the Agency to involve more actors, especially citizens and in particular member state taxpayers and end-users, in considering responses to societal challenges. Space is put at their service and can positively affect current and future generations through innovation, exploration and international cooperation.

The Citizens’ Debate results are available online in the 17 languages of the debate at: citizensdebate.space

A summary of the main recommendations from participants:

The Director General will use the strong messages of the debate participants in shaping the Agency’s future space activities and also to continue the dialogue with stakeholders. He stresses that the opinions expressed by participants will be taken into account in his discussions at ESA’s Ministerial Council in Lucerne, on 1–2 December.

To continue the dialogue, ESA encourages its member state citizens to organise ‘replica debates’. These may take place in schools, classes, clubs, associations and other similar places.

The required materials can be downloaded at citizensdebate.space. Videos, presentations and the Citizens’ Debate magazine are available in 17 languages and can be used to organise citizens’ own debates, or simply as information material.