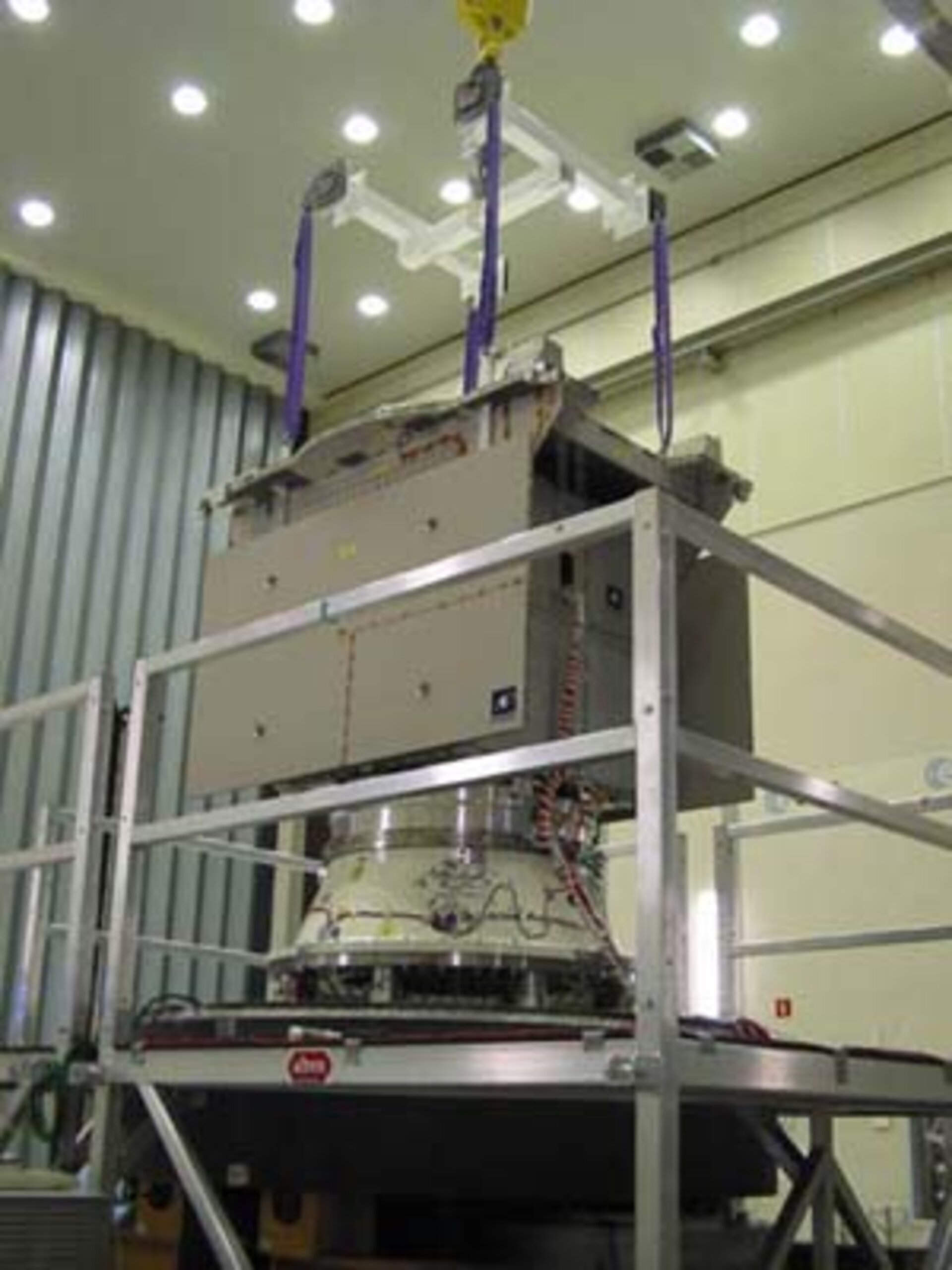 The structural model of the first of two experimental Galileo satellites to be launched in 2005, is currently being tested at the European Space Agency’s European Space Research and Technology Centre (NL). Over the coming weeks ESA will assess the design worthiness of this satellite model from Surrey Satellite Technology Ltd.

The Galileo Development and Validation phase started in December 2003. This phase aims at implementing a space and ground infrastructure that will enable the Galileo System validation prior to the full deployment of the Galileo system.

A mini constellation of four satellites will constitute the space segment of this infrastructure. Prior to this phase, ESA will manage the launch of an experimental satellite and related ground segment (GSTB-V2).

In July 2003, ESA set up two contracts to procure two experimental satellites in parallel. This was to minimize risks such as delays in satellite manufacture or launch/satellite failure. One test satellite (GSTB-V2-A) is from Surrey Satellite Technology Ltd (SSTL) UK; the other satellite (GSTB-V2-B) is from Galileo Industries (GaIn), a consortium of major European satellite primes. These satellite primes are leading teams of sub-contractors from companies located all-over Europe.

The first of these two launches will occur before the end of 2005 from the Cosmodrome of Baïkonour with a Soyuz Launcher. One satellite must be in orbit to secure the signal frequencies allocated to Galileo with the International Telecommunications Union (ITU). These signals must be received by June 2006.

Additionally, these Galileo signals will allow for early experimentation of Galileo receivers on ground. The experimental satellites will also allow for the testing of some of the critical technologies onboard the satellite such as the atomic clocks and the signal generator.

The experimental satellite from Galileo Industries will host a Hydrogen Maser clock, that has a stability better than one nanosecond per day. This clock should be the best clock ever flown in space.

This will be the first time Europe sends satellites to medium earth orbit. In this orbit satellites are particularly stable but have the drawback of being exposed to higher doses of radiation than in traditional geostationary orbits. Therefore the experimental satellites will carry special instruments to measure the radiation environment and provide unique information for the Galileo constellation development.

The Structural Qualification Model (SQM) of the GSTB-V2-A satellite that has come from Surrey Satellite Technology Ltd is presently being tested in the Test Centre of the European Space Agency’s European Space Research and Technology Centre (ESTEC) in Noordwijk (NL). This is so that ESA can assess the design worthiness of the satellite structure vis-à-vis the launcher environment and establishing the mechanical levels of all the satellite units. The SQM is being submitted to alignment tests, sine and random vibration tests, shock tests and acoustic noise tests.

The GSTB-V2-A satellite being manufactured by Surrey Satellite Technologies Ltd has the following main characteristics:

Characteristics of the satellite from Galileo Industries (GSTB-V2-B)

The GSTB-V2-B satellite being manufactured by Galileo Industries has the following main characteristics:

Both satellites have a design lifetime of more than three years for nominal mission duration of 27 months.

Once fully deployed the Galileo constellation will be built around 30 satellites (27 operational and three in reserve) stationed on three circular medium-Earth orbits at an altitude of 23 616 km and inclined at 56° to the equator.

Galileo is an initiative of the European Commission and the European Space Agency. Galileo will be a global navigation satellite infrastructure under civil control. It will ensure European sovereignty in future traffic management services and many other application areas.