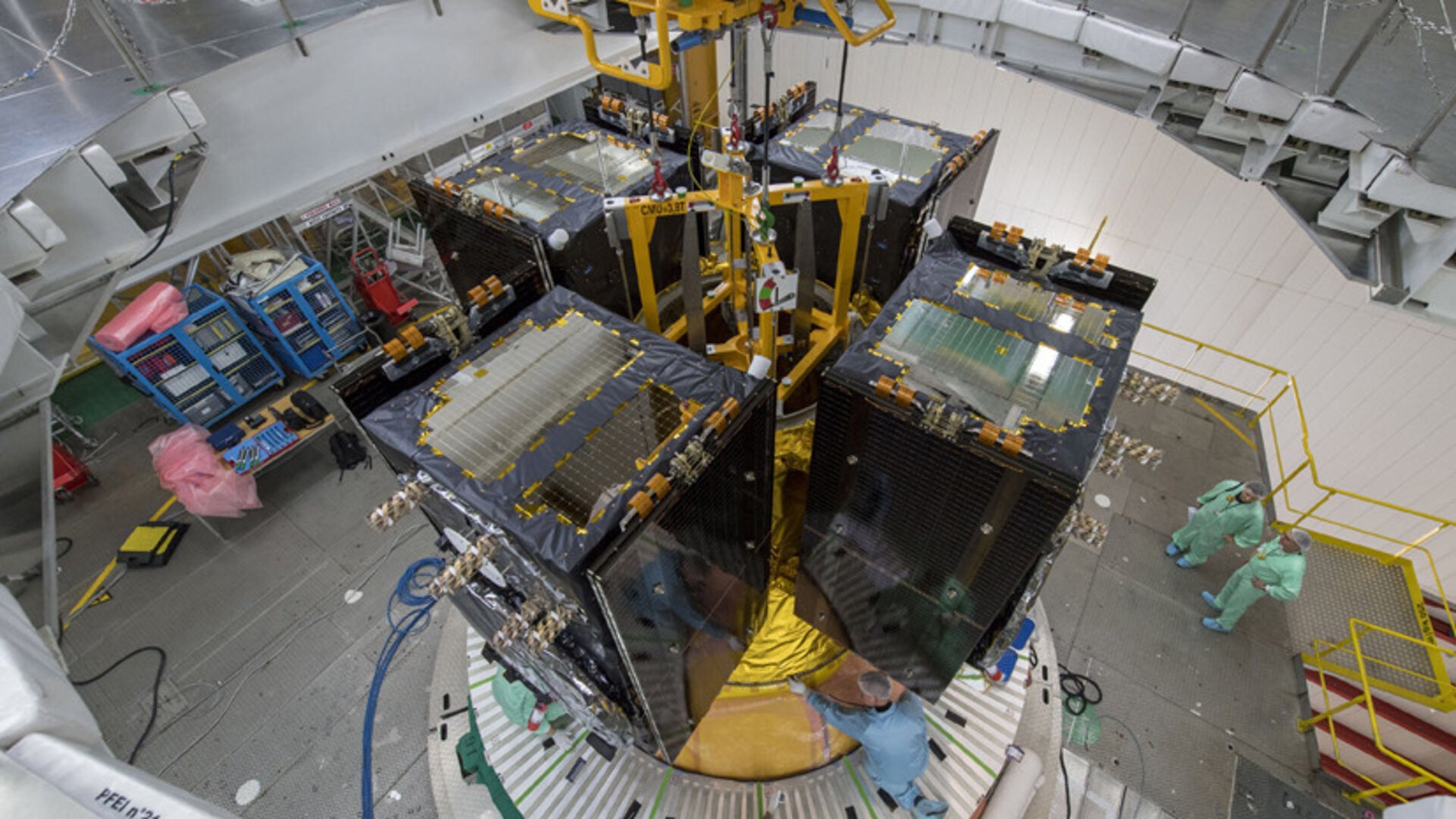 Europe’s next Galileo satellites have been put in place on top of the Ariane 5 launcher due to lift them from Europe’s Spaceport in Kourou, French Guiana on Wednesday 25 July.

The launcher – appearing headless in the absence of its final payload – was moved from the BIL Launcher Integration Building, where it was assembled, to the BAF Final Assembly Building, ready for the Galileo satellites to be mated with it.

“In preparation for their launch the four satellites were switched off, apart from their battery charging line and another maintenance power line to their passive hydrogen maser –  or PHM for short –  atomic clocks,” reports Jean Verniolle, ESA’s Galileo mission director for this launch.

“Next Galileo satellites 23–26 were integrated one by one on four successive days onto the Galileo dispenser that will hold them securely in place for launch, and to form what we call the launch ‘stack’.”

On the evening of Tuesday 10 July, this integrated stack was transported to the BAF, then hoisted on top of the Ariane 5 the following day. The next step came on Thursday, when the protective launcher fairing – emblazoned with the Arianespace Flight VA244 logo – came down and enclosed the satellites, the last time they were glimpsed by human eyes.

The days that follow will see intensive activity on the launcher side.  Meanwhile the dormant satellites will remain under temperature-controlled ventilation under the fairing, with their battery and PHM atomic clock maintenance lines being kept active and monitored continuously until launch.

The PHMs are the most precise atomic clocks ever flown for navigation, and keeping them powered on in advance of launch serves to maximise their reliability. Each Galileo satellite carries two PHMs plus two rubidium atomic clocks as backups.

“A formal launch dress rehearsal will be conducted on 18 July, one week before the launch,” adds Jean.

“Then on the following day we will hold a launch readiness review for the four Galileo satellites, followed by an Arianespace review of the launcher, the launch site and infrastructure, and the readiness of satellites and the launch and early orbit phase network, on 20 June, confirming a go for launch.”

The fully integrated Ariane 5 will be rolled out from the BAF to the launch pad on 23 July, scheduled to take around 1 hour 35 minutes.

This launch will mark Europe’s 99th Ariane 5 flight. The four new Galileo satellites will bring the constellation from 22 to 26 satellites in orbit.

The satellites are manufactured by OHB Systems (DE), with the launch undertaken by Arianespace (FR) both under contract to ESA. The LEOP is carried out by the Galileo operators SpaceOpal (DE, IT) together with CNES (FR) under responsibility of the GSA, the European GNSS Agency.