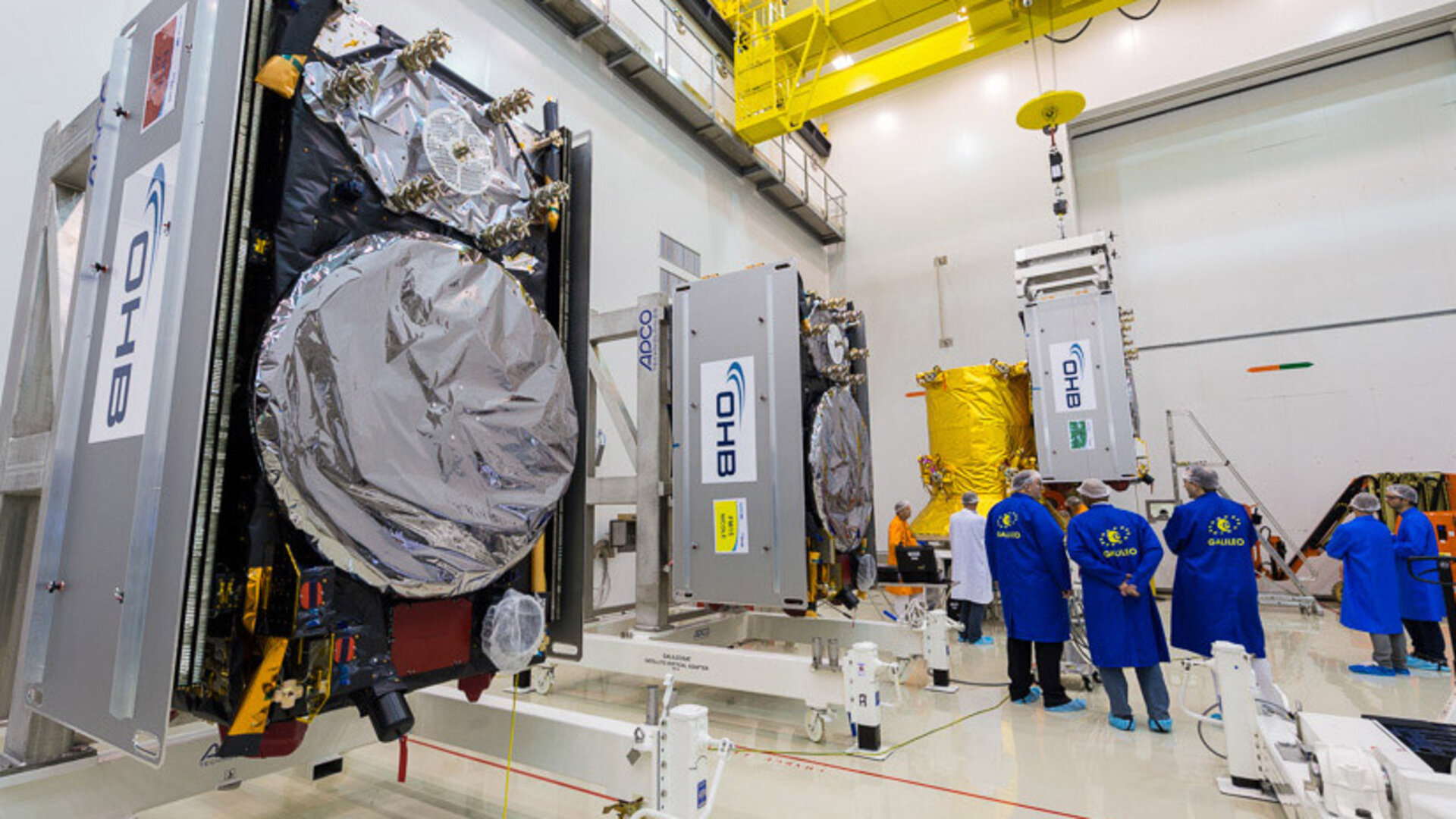 Europe’s next four Galileo navigation satellites and the Ariane 5 rocket due to lift them into orbit are being readied for their 12 December launch from Europe’s Spaceport in Kourou, French Guiana.

Tuesday saw Galileo satellites 19–22 declared ready for flight, along with their Ariane. Combined activities are now under way, culminating in the satellites meeting their rocket in the Final Assembly Building.

The satellites were flown in pairs to French Guiana last month. Once safely unboxed in the Spaceport’s cleanroom environment, they were tested to ensure they had suffered no damage during their transatlantic flights.

Next came their ‘fit check’, when they were mechanically and electrically linked one by one to the dispenser that will carry them during their ascent to the target 23 500 km-altitude orbit, before releasing them into space.

Last Friday saw the satellites filled with enough fuel to fine-tune their orbits and orientation during their projected 12 year working lives. Next, they will be attached to their dispenser together for the final time.

In parallel, their customised Ariane 5 is being assembled. Two solid-propellant boosters were mated with its main cryogenic stage before the addition of the interstage that carries the electronics to control the vehicle.

Next came the addition of the storable propellant stage, powered by a reignitable engine, which will deliver the quartet to their target orbit.

Once fully checked, the Ariane will be moved to the final building for the addition of the satellites atop their dispenser, sealed within their protective fairing.

This launch will bring the total Galileo constellation to 22, boosting the global availability of navigation signals. Galileo began Initial Services just under a year ago, the first step before full operations, on 15 December.

Galileo is Europe’s own satellite navigation system, consisting of both the satellites in space and their associated ground infrastructure, to provide an array of positioning, navigation and timing services to Europe and the world.

The definition, development and in-orbit validation phases were carried out by ESA, and co-funded by ESA and the European Commission. This phase created a mini-constellation of four satellites and a reduced ground segment set up to validate the overall concept, ahead of further deployment.

The current Full Operational Capability phase is fully funded by the EU and managed by the Commission. The Commission and ESA have a delegation agreement by which ESA acts as design and procurement agent on behalf of the Commission.