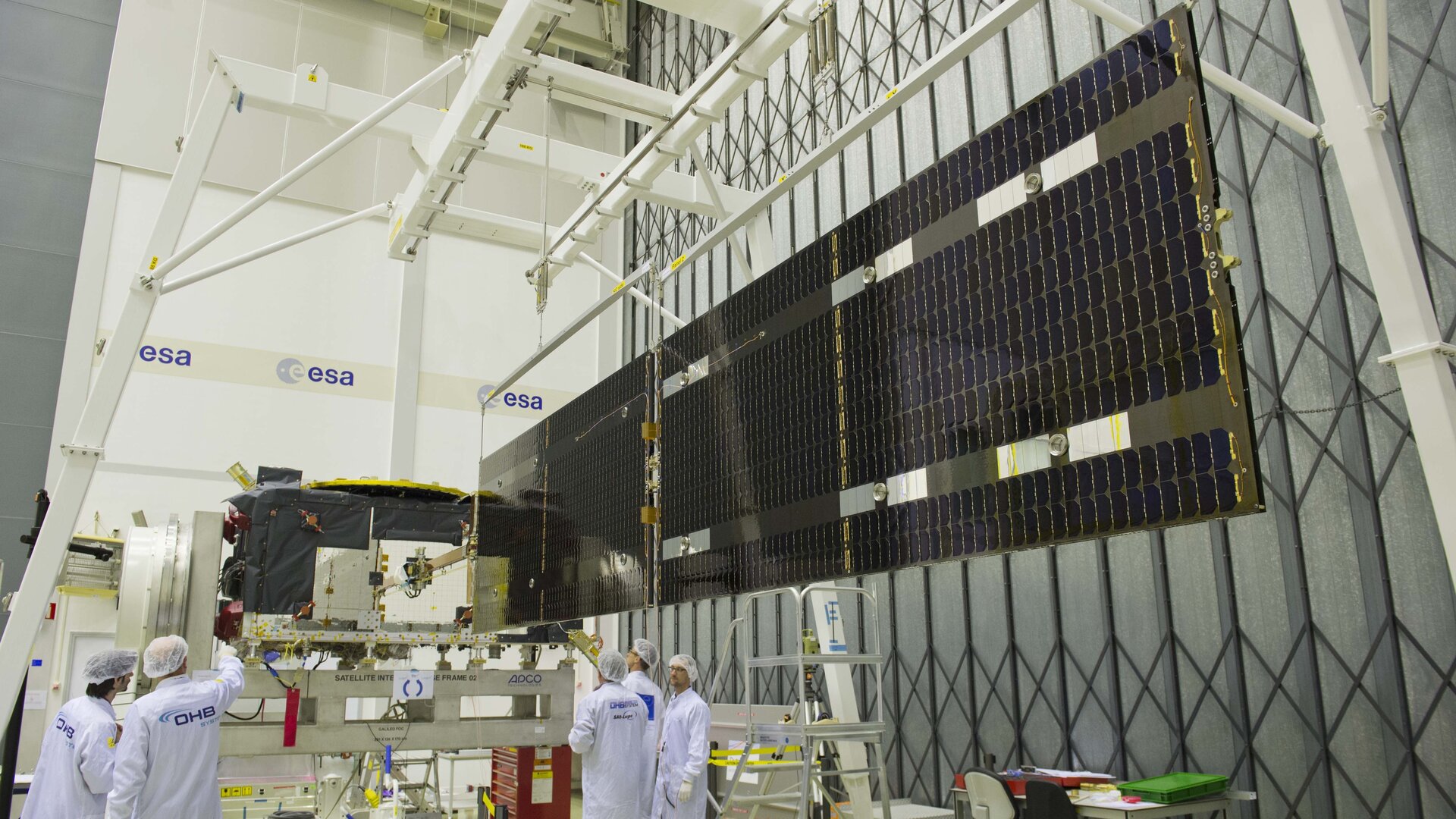 Deployment of the solar wings on the latest Galileo satellite is shown being checked at ESA’s technical hub in the Netherlands. The navigation satellite’s pair of 1 x 5 m solar wings, carrying more than 2500 state-of-the-art gallium arsenide solar cells, will power the satellite during its 12-year working life.

A counterweighted rig supports the deployment, otherwise the delicate fold-out wings – designed for the weightlessness of space – would crumple under the pull of Earth gravity.

With the first four Galileo ‘In-Orbit Validation’ satellites already in orbit, this is the first of the rest of Europe’s satnav constellation.

These ‘Full Operational Capability’ satellites provide the same operational services as their predecessors, but they are built by a new industrial team: OHB in Bremen, Germany build the satellites with Surrey Satellite Technology Ltd in Guildford, UK contributing the navigation payloads.

There are also a lot more of them: this satellite is only the first of 22 ordered from OHB. It arrived at ESA’s ESTEC research and technical centre in Noordwijk in mid-May to begin a rigorous campaign of testing in simulated launch and space conditions, guaranteeing its readiness for launch.

The very first test performed on the satellite once it came out of its container was a System Compatibility Test Campaign, linking it up with the Galileo Control Centres in Germany and Italy and ground user receivers as if it was already in orbit.

Galileo’s wings with 30%-efficient solar cells were fitted at the end of June, supplied by Dutch Space in nearby Leiden.

Future satellites will have their wings fitted at OHB before coming to ESTEC, but this first satellite offered an opportunity for Dutch Space engineers to train their OHB counterparts in the procedure.

“The 22 Galileo FOC satellites are being produced and tested on a batch production basis, which is a new way of working for ESA,” explained Jean-Claude Chiarini, overseeing FOC satellite procurement for the Agency.

“The concept is really to set up a steady flow of satellites from OHB to ESTEC and then Kourou for launch over the next few years.

“The first four will undergo full validation testing, checking the underlying design is correct, in order to support the formal ground qualification of the design, with subsequent FOC satellites then going through acceptance testing, concentrating on checking workmanship.”

The FOC satellites, while resembling their predecessors, are designed with this production concept in mind. Hinged modules offer easy access to internal subsystems for rapid repair or potential replacement of units.

The next satellite is due to arrive around the start of August. The battery of simulations includes vibration and acoustic testing, as well as thermal–vacuum testing – submitting them to the airlessness and temperature extremes of space for weeks at a time.