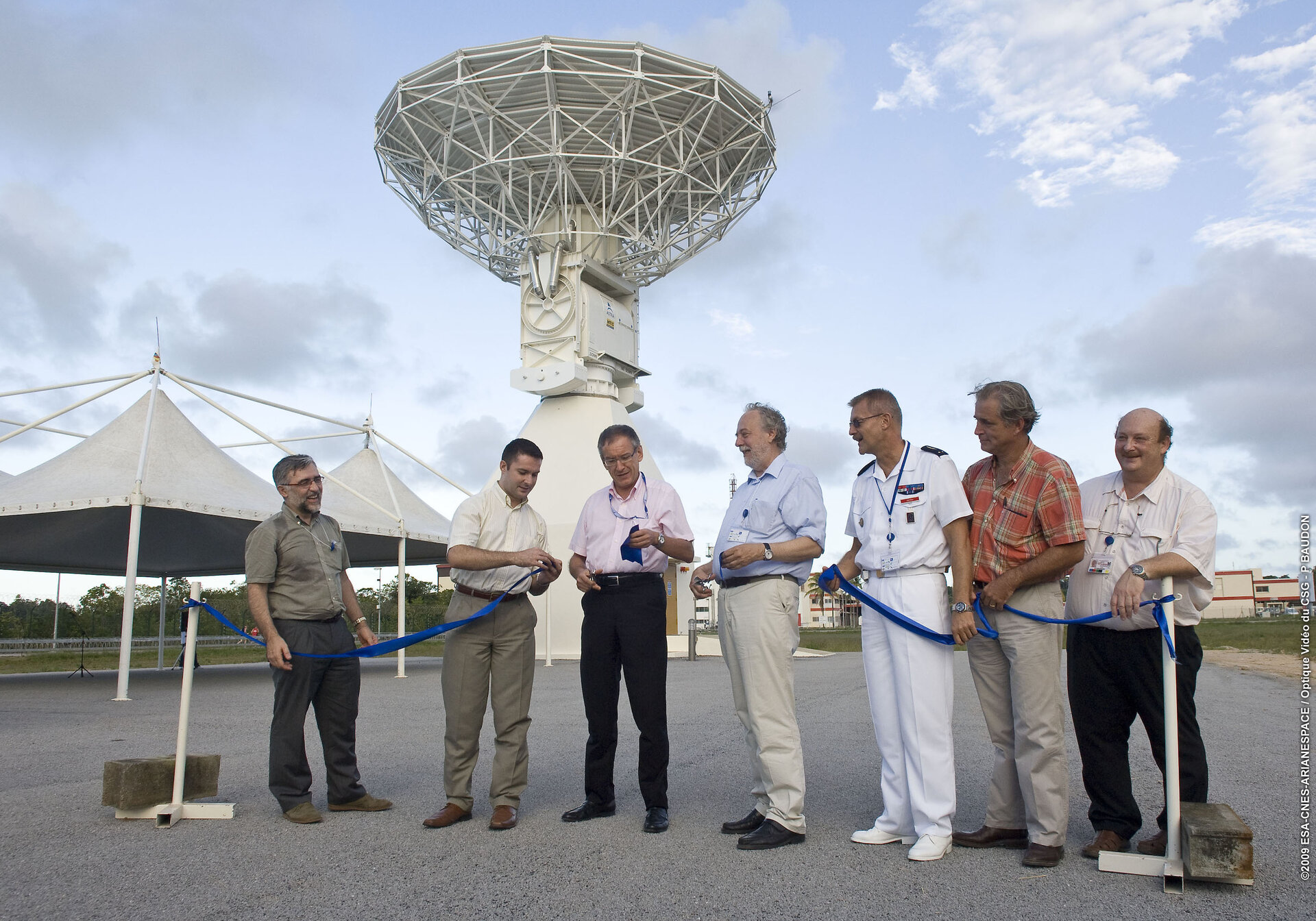 ESA PR 29-2009. The site of a ground station for Galileo, Europe's global navigation satellite system, inside the Guiana Space Centre (CSG), near Kourou in French Guiana, was inaugurated on 19 November.

The site, which was made available by France's Centre national d’études spatiales (CNES), will play an essential role in the setting up of the Galileo system, since it will accommodate the most comprehensive of the Galileo ground segment stations. The Kourou station will consist of a telemetry, tracking and command (TT&C) station to monitor and control the Galileo constellation satellites, a sensor station (GSS) for acquisition of the satellite navigation signals, and two uplink stations (ULS) for transmission of navigation and integrity messages to the satellites.

In all, the Galileo ground segment for the in-orbit validation phase (IOV) will comprise 18 sensor stations, 5 uplink stations, 2 telemetry, tracking and command stations, and 2 Galileo Control Centres (GCCs). The Control Centres will be situated at Fucino in Italy and Oberpfaffenhofen in Germany. The data gathered by the sensor stations will be continuously transmitted to the GCCs where they will be processed by mission control in order to determine the navigation and integrity messages to be sent back to the satellites via the uplink stations. The Galileo system's capability to directly inform its users of the integrity level of its signal represents a major advance compared to other satellite navigation systems.

The inauguration of the Kourou site marks an important stage in the in-orbit validation phase of the Galileo programme developed by the European Space Agency (ESA) in cooperation with the European Commission. The first of the Galileo constellation satellites will be launched at the end of 2010 atop a Soyuz rocket that will lift off from the CSG.

Subsequently, the Galileo ground station at Kourou will evolve as the system – which will consist of 30 satellites – is built up to full deployment, with the addition of 2 ULS antennas and 2 further redundant GSS channels, producing the final configuration. CNES will be responsible for site security and infrastructure maintenance during the operational phase.

The site was inaugurated in the presence of René Oosterlinck, Director of the Galileo programme and navigation-related activities at ESA, and of Joël Barre, Director of CNES/CSG.

"I have been working on this project since 1998 and am happy to be here today at the CSG for the inauguration of this site. The ground network is just as important to Galileo as the 30 satellites that will transmit the data to users. Now we are all awaiting the launch of the satellites scheduled for end-2010", said Mr Oosterlinck.