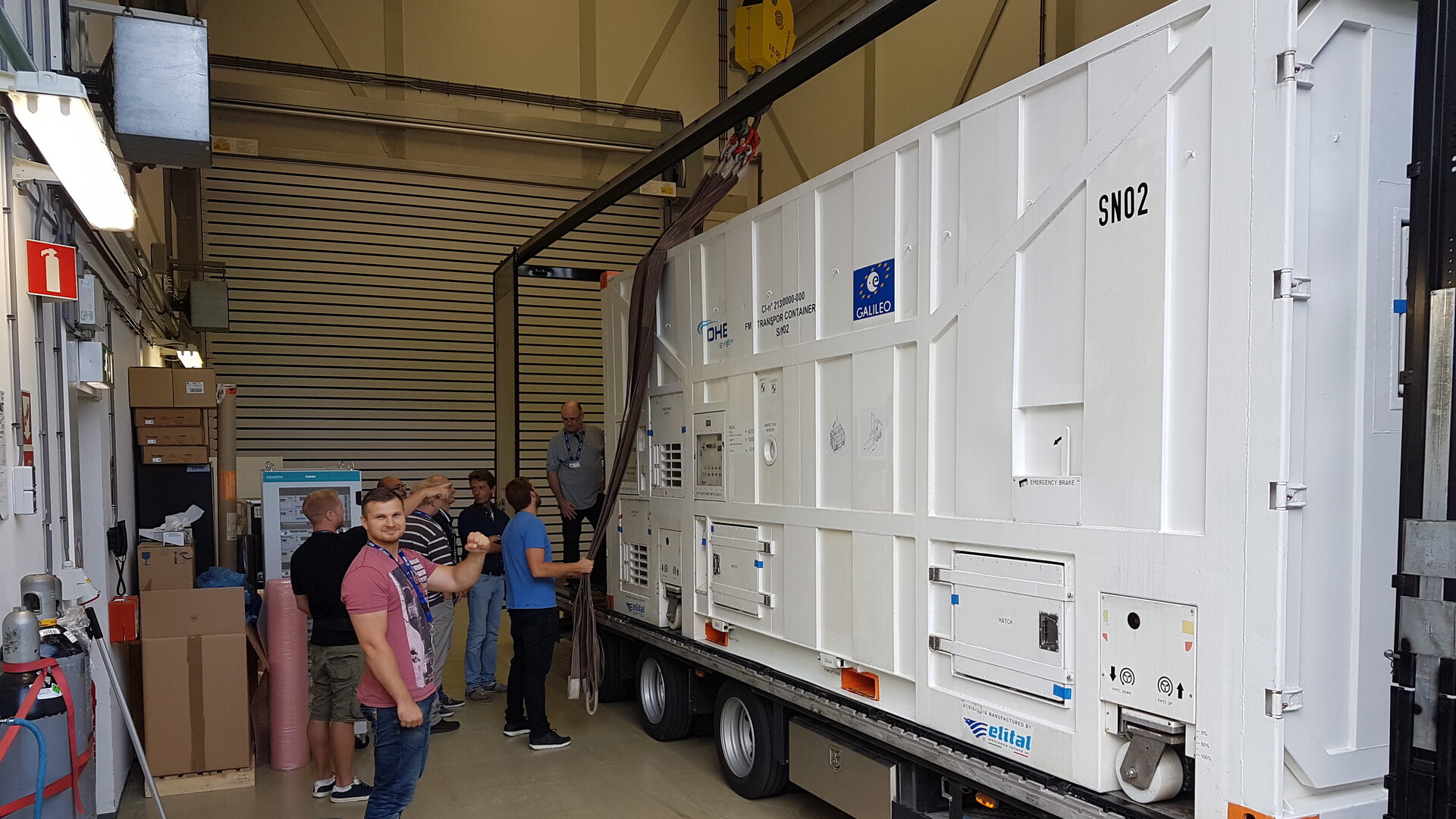 The last of 22 Galileo satellites has departed ESA’s Test Centre in the Netherlands – concluding the single longest and largest scale test campaign in the establishment’s history.

Cocooned in a protective container for its journey – equipped with air conditioning, temperature control and shock absorbers – the final Galileo satellite left the establishment by lorry on 24 August.

ESA’s Test Centre at ESTEC in Noordwijk, the Netherlands houses a collection of test equipment to simulate all aspects of spaceflight. It is operated for ESA by private company European Test Services (ETS) B.V.

In May 2013, the Test Centre began testing the first of 22 Galileo ‘Full Operational Capability’ (FOC) satellites, having previously performed the same function for the very first Galileo ‘In-Orbit Validation’ satellite under a separate contract.

The Galileo FOC satellites had their platforms built by OHB System AG in Germany, incorporating navigation payloads coming from Surrey Satellite Technology Ltd in the UK. They then travelled on to ESTEC, to be subjected to the equivalent vibration, acoustic noise, vacuum and temperature extremes that they will experience for real during their launch and orbit, plus testing of their radio systems.

With a steady stream of satellites coming off the production line, the challenge for the combined ETS and OHB team overseeing Galileo testing was to put them through all necessary tests on a rapid and efficient basis, while also keeping the Test Centre accessible to other European missions requiring its unique services.

A total of 14 FOC satellites have since joined the first four IOV satellites in orbit, forming an 18-strong constellation that began Initial Services to global users on 15 December last year. The next four FOC satellites are scheduled for launch on an Ariane 5 this December.

“For the first time in more than four years there are no Galileo satellites in the Test Centre, but hopefully this will not be the end of our association with the programme,” comments Jörg Selle, ETS Managing Director.

“The contract for making the next eight Galileo satellites – known as Batch 3 – was also awarded to OHB last June, and ETS will be bidding for the contract to test these satellites too.”

“The availability of the ETS facilities in ESTEC have substantially contributed to the programme,” said Paul Verhoef, ESA Director of the Galileo Programme and Navigation-related Activities. “We thank ETS for their professionalism and support over this extended period.”

The final Galileo travelled back to OHB in Germany for some final refurbishment ahead of its launch together with another three satellites in December.