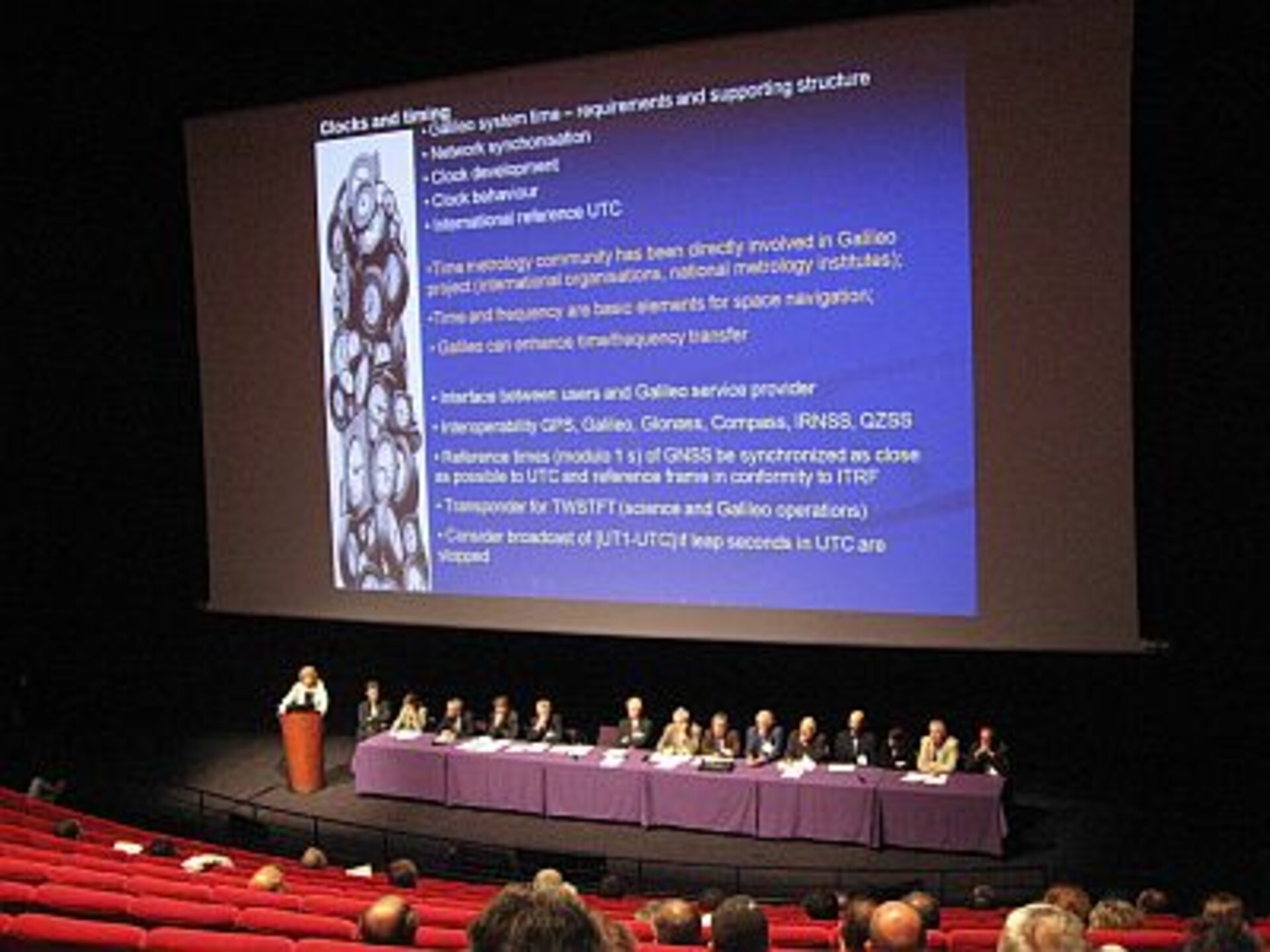 Galileo is a promising tool for the scientific community, even though it is mainly intended for a set of practical services such as guiding cars, supporting safe aircraft landings or helping blind people to find their way.

This was clearly demonstrated during the first colloquium on scientific and fundamental aspects of the Galileo programme that took place at the ‘Cité de l'Espace’ in Toulouse from 1 until 4 October. The colloquium was organised by the Air and Space Academy, the Bureau des Longitudes, the Académie de Marine and ESA.

Indeed, the main objective of this world premiere was reached beyond expectations: enhancing the scientific use of Galileo and contributing to the science-based development of Global Navigation Satellite Systems (GNSS).

Around 200 scientists, coming from 25 countries world wide – with 19 being European, gathered and showed their interest in using GNSS systems and in particular Galileo’s accuracy and integrity to improve their research in a wide scope that spans Earth sciences (for example: geodesy, meteorology, geophysics), quantum metrology (for example: atomic clocks, inter-satellite links, the Galileo timing system) and relativity (for example: spacetime symmetries, relativistic reference frames, astronomy and GNSS).

At the same time, the scientist’s expertise can be of great help in improving the Galileo system itself. This is a ‘win-win’ situation, since a more precise tool can give more accurate data and therefore improve the measurements needed by the scientists for their research.

The scientists need to have access to GNSS data and ESA will facilitate further access to EGNOS and GIOVE-A data, which are already available to some extent. Dedicated solutions will be found for the scientists, with restrictions only being sometimes applied to commercial or PRS service data. Access to registered, stored data – which are the types most wanted by the scientific community – will be easily granted.

With this conference ESA was also expecting recommendations to improve the system itself and several were expressed so as to ensure the best environment for the scientific exploitation of Galileo. Of course, the requirements are now frozen for the first generation system but within the GNSS evolution programme, supported by ESA member states for technology accompaniment and the new Galileo generation, there is time to implement these particular needs – this is totally open in this programme envelope and new ideas are welcome.

The colloquium also led to reflection on the way the scientific community can organise itself for the use of Galileo. The event complements the already established effort, carried out by ESA, to contact scientific institutes in the fields of timekeeping, frequency standards and geodesy. Following this conference, the Galileo scientific community also includes the domains of quantum metrology and relativistic mechanics.

Although important progress was made, the debate still remain open on how scientists wish to express their specific needs to make the best use of Galileo. This will lead, in the medium and long term, to a privilege working relationship between scientific teams and the project teams responsible for building the next generation of European GNSS.

The colloquium was a great and unique opportunity for the Galileo partners to discover the numerous uses of satellite navigation, in the fields of Earth sciences, quantum metrology and relativistic mechanics, and to identify how scientific requirements can contribute to making the most of the present systems and to define their possible future evolution.

The use of quantum entanglement in the overall GNSS constellation, for example for clock synchronization, and the development of fully relativistic reference frames implemented through the GNSS constellation itself are of particular interest.