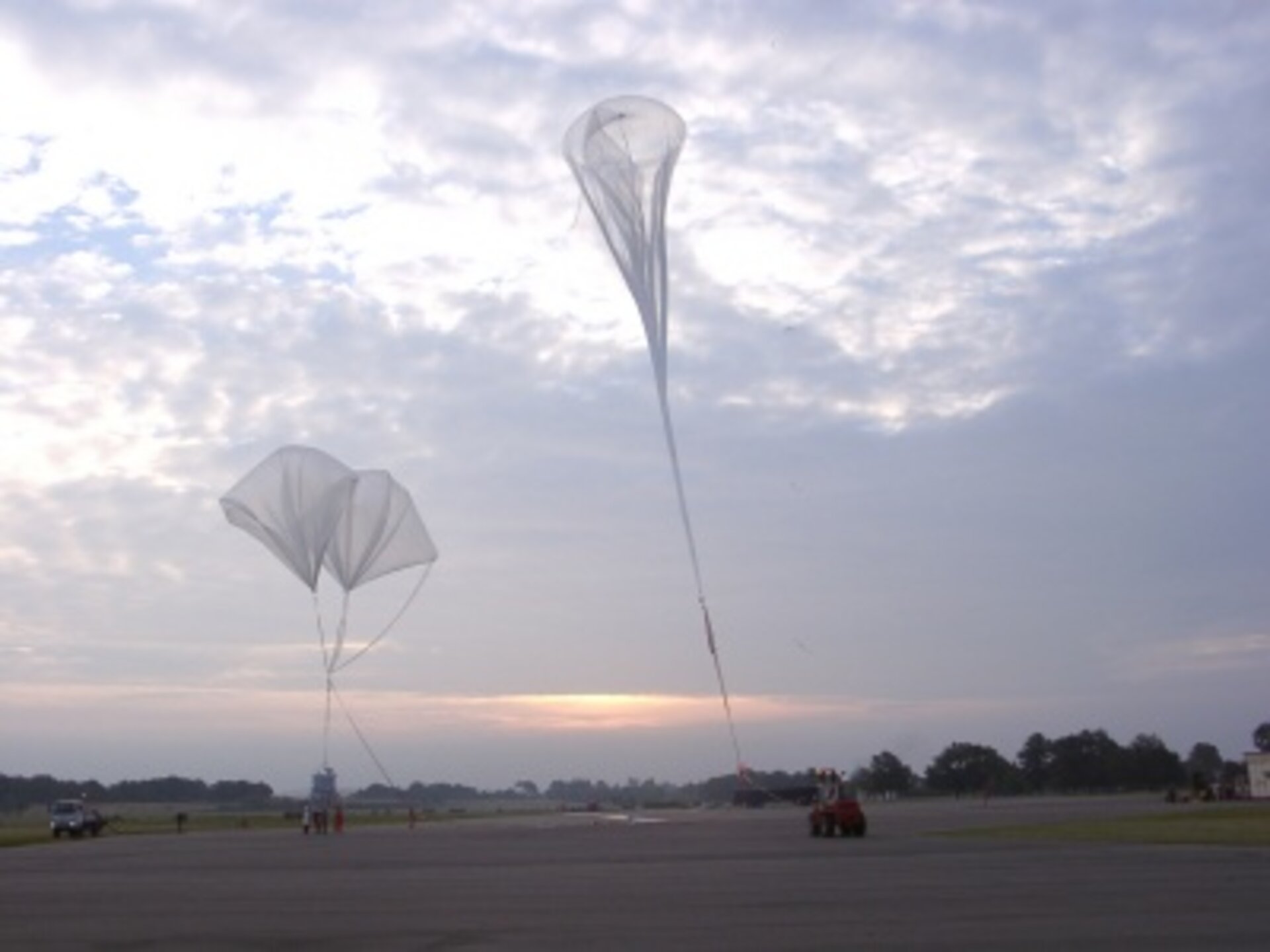 The Envisat Stratospheric Aircraft and Balloon campaign (ESABC), which is dedicated to validating three chemistry instruments carried on Envisat began back in the summer, however, this autumn has seen a particularly intense period of activity.

In September, atmospheric data was collected during long flights made by the German DLR atmospheric research aircraft Falcon-20 between polar regions over Greenland and as far south as the Seychelles in the Indian Ocean. A series of stratospheric balloons were launched in France and in October the high altitude M-55 Geophysica aircraft carried out a number of campaign flights over Italy and the Mediterranean.

These Envisat validation campaigns are part of a long series, which began in July and are set to continue into next year. The objective of such a long and involved campaign period is to validate the data from the MIPAS, GOMOS and SCIAMACHY chemistry instruments on-board Envisat, which was launched in March this year.

The ESABC campaign is dedicated to validating these chemistry instruments at different latitudes and under various climatic conditions. Consequently, each of the many flights made on behalf of the ESABC campaign carries specialised instruments, which are individually configured to measure specific atmospheric constituents. One of the crucial aspects of the whole campaign is to ensure that each of the flights is carefully timed so that it coincides with Envisat’s orbit as it passes overhead. This is important because in order to validate the chemistry instruments and make sure that the data from Envisat is accurate, it is essential that the validation instruments on the aircraft or balloon measure the same prevailing atmospheric conditions as those measured by the instruments on Envisat.

Over a four-week period in September, the German DLR atmospheric research aircraft flew many thousands of kilometres in order to contribute to the validation of the SCIAMACHY instrument on Envisat. Atmospheric data was successfully collected from an altitude of 12 km and provided extended longitudinal and latitudinal atmospheric cross sections from numerous locations. The northern routes included flights made from the home base of the aircraft in Munich to Greenland and Kiruna in northern Sweden whilst the southern routes included flights made from Munich via Mallorca to Nairobi and on to the Seychelles. This part of the campaign comprised 54 hours of flying time while the instruments collected data along 18 Envisat orbits.

Between the second half of September and the beginning of October, a total of 7 stratospheric balloons were launched from Aire sur l’Adour in France in order to validate MIPAS, GOMOS and SCIAMACHY at mid-latitudes. Each balloon flight carried a specially configured payload and took measurements from altitudes up to 39 km. Although this part of the campaign wasn’t without incident (a couple of crash-landings due to strong gusts of wind as well as losing one balloon as it was swept off-course towards Romania) the quality of data acquired was particularly good and hailed a complete success. “The stratospheric balloon campaign in Aire sur l’Adour was particularly successful as we were able to get atmospheric measurements from very close to Envisat – in fact we managed to get just 80 km from the satellite which is very good indeed and will provide us with some excellent validation data, better than we could have hoped for. In part, this success was due to the excellent work performed by the CNES team on site and the outstanding cooperation between all of the parties present – ESA, CNES and the scientific community”, said Patrick Wursteisen the ESABC Scientific Campaign Coordinator.

Then in October, five campaign flights dedicated to the ESABC campaign were conducted from Forli airport in northern Italy by the high altitude M-55 Geophysica aircraft. In order to optimise data acquisition three out of the five flights were coordinated with flights made by the DLR Falcon-20 so that data was collected simultaneously from altitudes between 12 and 20 km. The flight plans were conducted in a way to permit maximum spatial and temporal coverage of the chemistry instruments on Envisat as it passed over-head.

Following the completion of the autumn phase of the ESABC campaign a workshop is planned for 9-13 December 2002 in ESRIN, Frascati, Italy when the data collected will be analysed by the Envisat Atmospheric Validation Team. However, the validation campaign will continue between January and March next year when a major balloon and aircraft campaign will take place in Kiruna, Sweden and long duration infrared balloons will be launched from Brazil and circum-navigate the Earth several times over a two-month period taking measurements from the tropics. Also a ‘Press Week’ event is currently being organized for the end of January in Kiruna, Sweden in cooperation with ESA, NASA, the European Commission and ESRANGE to highlight the validation activities and the stratospheric research that takes place here.