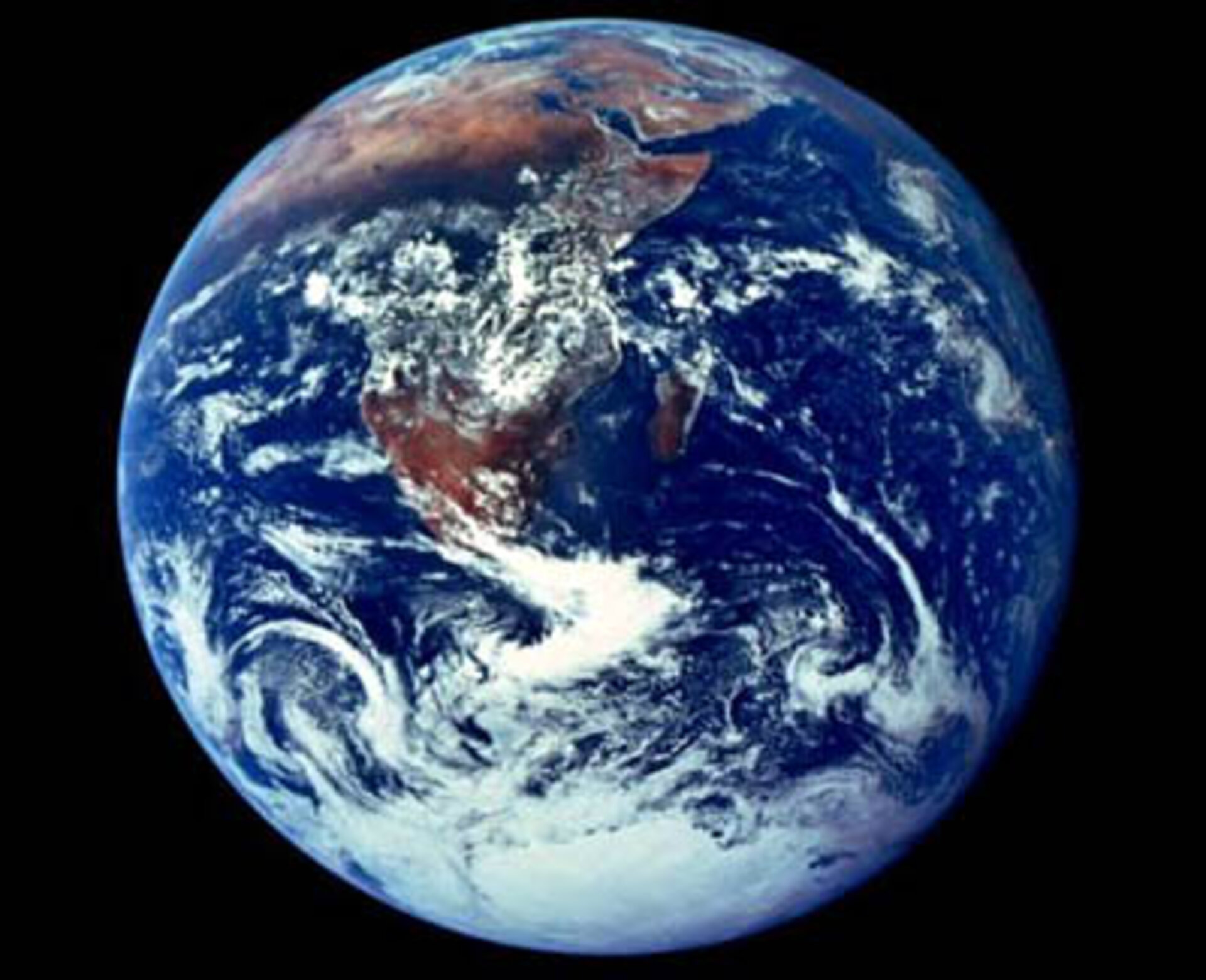 These are just some of the consequences that have been associated with changes in global climate caused by human activity - particularly the pumping of so-called greenhouse gases into the atmosphere.

No one disputes that, with a population exceeding 6 billion today and likely to become 9 billion in 50 years, the potential of humanity to alter our planet is now far greater than at any time during the previous 3,000 years of human history. However, the key questions remain. Is human interference with Nature really causing long-term changes to our climate? Just how realistic are the apocalyptic predictions?

Our Earth is a fertile oasis in space. The blue planet so admired by astronauts lies approximately 150 million km from the Sun. At this distance, our water-covered world should be frozen, a globe covered in a sheet of ice. On an airless Earth, the average surface temperature would be 33 degrees lower: -18°C instead of the present average temperature of +15°C. Only the atmosphere prevents Earth from freezing. In particular, the presence of certain heat-trapping gases - the "greenhouse" gases - provides our Earth with the mild, stable temperature that makes it so hospitable for life.

Other trace gases such as methane, nitrous oxide, ozone and chlorofluorocarbons (CFCs) also contribute to this global warming. Most of these occur naturally, but they may also be generated by human activity. The fear is that enhanced emissions of greenhouse gases from industry and agriculture will also enhance the natural greenhouse effect.

There can be no disputing that concentrations of most greenhouse gases have increased significantly in recent years. The atmospheric concentration of carbon dioxide has risen by almost one third since 1750, largely as a result of fossil fuel burning and land use changes such as deforestation. Studies of air trapped in Antarctic ice cores indicate that the current level is the highest for at least 420,000 years, and possibly unprecedented for 20 million years.

It is a similar story for many of the other greenhouse gases. Methane levels have trebled since 1750, nitrous oxide has risen by 17% and ozone in the lower atmosphere (the troposphere) has increased by more than one third. The situation is further complicated by the ability of certain man-made pollutants, particularly oxides of nitrogen and organic hydrocarbons, to have an indirect influence by generating ozone in the lower atmosphere.

Scientists agree that global mean temperatures are half a degree Celsius warmer than they were a century ago, that the amount of carbon dioxide in the atmosphere has been increasing for two centuries, and that carbon dioxide is the greenhouse gas that is most influential in warming the Earth. It is also generally accepted that the 1990s were the warmest decade and 1999 was the warmest year since records began in 1861.

However, despite this apparent link, the scientific community is unable to agree on whether the warming is caused primarily by CO2 emissions, whether it will continue, or whether it would be harmful if it did.

"One reason for this uncertainty is that the climate is always changing," said Richard Lindzen, professor of meteorology at Massachusetts Institute of Technology. "Two centuries ago, much of the northern hemisphere was emerging from a little ice age. During the Middle Ages, the same region was in a warm period. Thirty years ago, we were concerned with global cooling."

Apart from the natural climatic variations, scientists are also struggling to take into account the complex interactions that take place between the atmosphere, oceans, land and biosphere. Only now, with the advent of supercomputers and streams of data from Earth-orbiting satellites, are global climate models becoming sufficiently realistic to make reasonably accurate predictions.

However, even the most advanced computer models cannot forecast the future with any precision, partly because of the complex interactions between the Earth's natural systems, and partly because they are often based on data sets covering no more than a few decades.

This uncertainty is reflected in the latest Assessment Report issued by the Intergovernmental Panel on Climate Change, which estimates that the increase in the world's average surface temperature over the period 1990 to 2100 could range from as low as 1.4°C to as high as 5.8°C.

Climate in the balance

To keep our planet at an overall hospitable temperature, the Earth must loose some heat energy into space. Earth's outgoing energy has two components: thermal radiation emitted by the Earth's surface and atmosphere, and solar radiation reflected back to deep space by the oceans, lands, aerosols (tiny airborne particles) and clouds.

This balance between the incoming energy from the Sun and outgoing energy back to space, which scientists refer to as the Earth's "radiation budget", determines Earth's temperature and climate. It is controlled by both natural and human-induced changes, presenting scientists with a wide range of possible scenarios to study.

For scientists to understand climate, they must also determine what drives the changes within the Earth's radiation balance. This is where satellite data are playing an ever more influential role.

Earth orbiting spacecraft can obtain continuous measurements of many climate indicators over the entire planet, something that was impossible before the Space Age. By integrating data from space-borne instruments, scientists can test and improve the accuracy of their global climate models. This will eventually provide a new picture of the energy balance from the top of the atmosphere all the way down to the surface of the Earth.

While the available evidence suggests that human activity is having a discernible influence on global climate, existing climate models still reflect the great deal of uncertainty about the reasons for these changes and their future impact on the habitability of our planet.

The mass of data returned by the new generation of environmental satellites will help to clarify many of these uncertainties. The most powerful and versatile of these is the European Space Agency's Envisat, the largest scientific satellite ever built in Europe.

Envisat, which is due for launch in early 2002, will carry 10 instruments that are designed to study our ever-changing planet. Most of these instruments will have a direct impact on research into atmospheric chemistry and global climate change.

One of the key roles of Envisat's battery of instruments will be to measure the concentrations of water vapour, trace gases and aerosols at different levels in the atmosphere, something which is poorly quantified at the present time.

This is important because large quantities of man-made pollutants, including carbon, chlorine, ozone, nitrogen and sulphur compounds, have been injected into the atmosphere over the last century. These not only act as greenhouse gases, but they modify the chemistry of the upper atmosphere - sometimes in unexpected ways.

The roles of aerosols and clouds in the global climate system also need to be clarified. These can both absorb and scatter incoming solar radiation, so influencing the amount of energy reaching the Earth's surface.

Aerosols can also increase the rate at which solar energy is reflected back into space by promotion of cloud formation. However, the extent to which they modify Earth's climate has been difficult to assess since aerosols vary considerably in terms of size, shape and chemical composition. Sensors on Envisat should improve our knowledge of the origin, dynamics and eventual fate of aerosols.

Closer to Earth, Envisat will also monitor changes in surface conditions. Since the oceans absorb at least half of the excess heat energy received by the Earth and then transfer this energy from the tropics to the poles, continuous recording of sea surface temperatures will be vital. Envisat will also be able to monitor ocean currents and periodic climate-ocean oscillations, such as the famous El Niño that affects the Pacific coastal regions every few years.

Envisat will also measure ocean colour - the concentration of chlorophyll in the upper layers of the ocean. This is important because it indicates the abundance of microscopic plants and animals known as phytoplankton. By monitoring the "blooming" of the oceans in spring, scientists can study biological activity in the upper ocean and determine how much carbon is likely to be stored.

"The uptake of CO2 by the oceans is one of the most challenging and difficult to quantify," said Professor David Llewellyn-Jones, Head of Earth Observation Science at the University of Leicester, UK. "The oceans dissolve CO2, which is then assimilated into the marine biological system and returned to the carbon cycle. The biological productivity can be inferred on a global scale from satellite observations of ocean colour. The MERIS instrument on Envisat will give additional data about the biological productivity of the oceans and its subsequent influence on CO2 uptake."

Similarly, monitoring of vegetation on the Earth's land surface will provide improved estimates of how much carbon and energy is absorbed or released into the atmosphere. This is vital, since there is currently considerable uncertainty about the global carbon budget.

Finally, all-weather mapping from orbit of ice and land surfaces will give vital clues about global climate trends. Studies of whether ice sheets and glaciers are thinning, advancing or retreating, will provide scientists with a sensitive indicator of climate change. Apart from the implications for rising sea level and coastal flooding, such studies will also provide information on the Earth's albedo - the amount of solar radiation it reflects into space.

"Radar echoes from the ice sheets enable us to estimate their elevations," said Dr. Seymour Laxon of University College, London. "By measuring changes in the elevations of the ice sheets in Antarctica and Greenland, we can determine whether they are growing or shrinking, and whether global sea levels will be affected."

"We are also collaborating with the Hadley Centre for Climate Change (in the UK) to work the sea ice data into their models of climate change," he added. "This will help to improve the predictive capacity of these models."

Scientists unanimously agree that the development of increasingly sophisticated computer models is essential to our understanding of future climate changes.

"The only way to find out if the (climate) models are right is to get the right observations," said Professor Llewellyn-Jones. "The observations tell us what's there, then we set up a model to describe this behaviour and make future predictions."

"Finally, we use more observations to check our predictions," he explained. "This is the rationale behind all climate research - to be able to make accurate predictions about what will happen in the future. This would not be possible without observations from satellites such as Envisat and ever more sophisticated computer models."