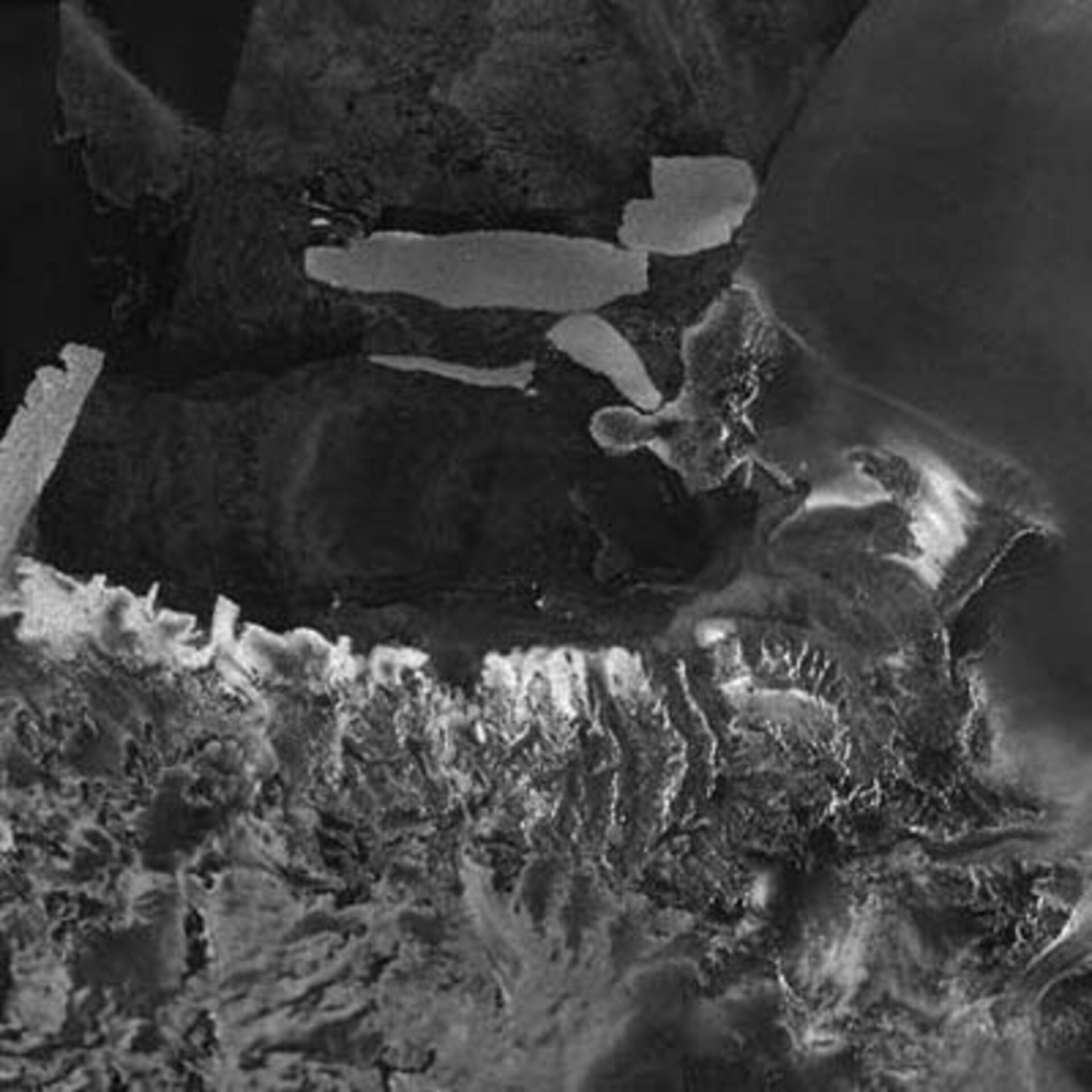 Some anticipated the 'collision of the century': the vast, drifting B15-A iceberg was apparently on collision course with the floating pier of ice known as the Drygalski ice tongue. Whatever actually happens from here, Envisat's radar vision will pierce through Antarctic clouds to give researchers a ringside seat.

A collision was predicted to have already occurred by now by some authorities, but B-15A's drift appears to have slowed markedly in recent days, explains Mark Drinkwater of ESA's Ice/Oceans Unit: "The iceberg may have run aground just before colliding. This supports the hypothesis that the seabed around the Drygalski ice tongue is shallow, and surrounded by deposits of glacial material that may have helped preserve it from past collisions, despite its apparent fragility.

"What may be needed to release it from its present stalled location is for the surface currents to turn it into the wind, combined with help from a mixture of wind, tides and bottom melting to float it off its perch."

To follow events for yourself, visit ESA's Earthwatching site, where the latest images from Envisat's Advanced Synthetic Aperture Radar (ASAR) instrument are being posted online daily.

The largest floating object on Earth, the bottle-shaped B-15A iceberg is around 120 kilometres long with an area exceeding 2500 square kilometres, making it about as large as the entire country of Luxembourg.

B15-A is the largest remaining segment of the even larger B-15 iceberg that calved from the Ross Ice Shelf in March 2000. Equivalent in size to Jamaica, B-15 had an initial area of 11 655 square kilometres but subsequently broke up into smaller pieces.

Since then B-15A has found its way to McMurdo Sound, where its presence has blocked ocean currents and led to a build-up of sea ice. This has led to turn to resupply difficulties for the United States and New Zealand scientific stations in the vicinity and the starvation of numerous local penguins unable to forage the local sea.

ESA's Envisat has been tracking the progress of B-15A for more than two years. An animated flyover based on past Envisat imagery begins by depicting the region as it was in January 2004, as seen by the optical Medium Resolution Imaging Spectrometer (MERIS) instrument (View the full animation - Windows Media Player, 3Mb).

The animation then moves four months back in time to illustrate the break-up of the original, larger B-15A (the current B-15A having inherited its name), split asunder by storms and currents while run aground on Ross Island, as observed by repeated ASAR observations. The animation ends with a combined MERIS/ASAR panorama across Victoria Land, including a view of the the Erebus ice tongue, similar to B-15A's potential 'victim', the Drygalski ice tongue.

As the animation shows, ASAR is extremely useful for tracking changes in polar ice. ASAR can peer through the thickest polar clouds and work through local day and night. And because it measures surface texture, the instrument is also extremely sensitive to different types of ice – so the radar image clearly delineates the older, rougher surface of ice tongues from surrounding sea ice, while optical sensors simply show a continuity of snow-covered ice.

"An ice tongue is 'pure' glacial ice, while the surrounding ice is fast ice, which is a form of saline sea ice," Drinkwater says. "To the radar there is extreme backscatter contrast between the relatively pure freshwater ice tongue – which originated on land as snow – and the surrounding sea ice, due to their very different physical and chemical properties."

The Drygalski ice tongue is located at the opposite end of McMurdo Sound from the US and New Zealand bases. Large and (considered) permanent enough to be depicted on standard atlas maps of the Antarctic continent, the long narrow tongue stretches 70 kilometres out to sea as an extension of the land-based David Glacier, which flows through coastal mountains of Victoria Land.

Measurements show the Drygalski ice tongue has been growing seaward at a rate of between 50 and 900 metres a year. Ice tongues are known to rapidly change their size and shape and waves and storms weaken their ends and sides, breaking off pieces to float as icebergs.

First discovered by British explorer Robert Falcon Scott in 1902, the Drygalski ice tongue is around 20 km wide. Its floating glacial ice is between 50 and 200 metres thick. The tongue's history has been traced back at least as far as 4000 years. One source has been radiocarbon dating of guano from penguin rookeries in the vicinity – the ice tongue has a body of open water on its north side that its presence blocks from freezing, sustaining the penguin population.

"The Drygalski ice tongue has been remarkably resilient over at least the last century," Drinkwater concludes. "In spite of its apparent vulnerability, shallower bathymetry of the area – enhanced by deposition of glacial sediments – may play an important role in diverting the larger icebergs with more significant draught around this floating promontory.

"This may rule out its potential catastrophic removal from collision with a large drifting berg in the short term. That leaves the elements of temperature variations, wave and tidal flexure, or bending, to weaken and periodically whittle pieces off the end of the ice promontory."

The 400-kilometre swath, 150-metre resolution images shown here of B-15A and the Drygalski ice tongue are from ASAR working in Wide Swath Mode (WSM). Envisat also monitors Antarctica in Global Monitoring Mode (GMM), with the same swath but a resolution of one kilometre, enabling rapid mosaicking of the whole of Antarctica to monitor changes in sea ice extent, ice shelves and iceberg movement.

Often prevailing currents transport icebergs far from their initial calving areas way across Antarctica, as with B-15D, another descendant of B-15, which has travelled a quarter way counterclockwise (westerly) around the continent at an average velocity of 10 km a day.

ASAR GMM images are routinely provided to a variety of users including the US National Oceanic and Atmospheric Administration (NOAA) National Ice Center, responsible for tracking icebergs worldwide.

ASAR imagery is also being used operationally to track icebergs in the Arctic by the Northern View and ICEMON consortia, providing ice monitoring services as part of the Global Monitoring for Environment and Security (GMES) initiative, jointly backed by ESA and the European Union. The two consortia are considering plans to extend their services to the Antarctic.

This year also sees the launch of ESA's CryoSat, a dedicated ice-watching mission designed to precisely map changes in the thickness of polar ice sheets and floating sea ice.

CryoSat should answer the question of whether the kind of icesheet calving that gave rise to B-15 and its descendants are becoming more common, as well as improving our understanding of the relationship between the Earth's ice cover and the global climate.