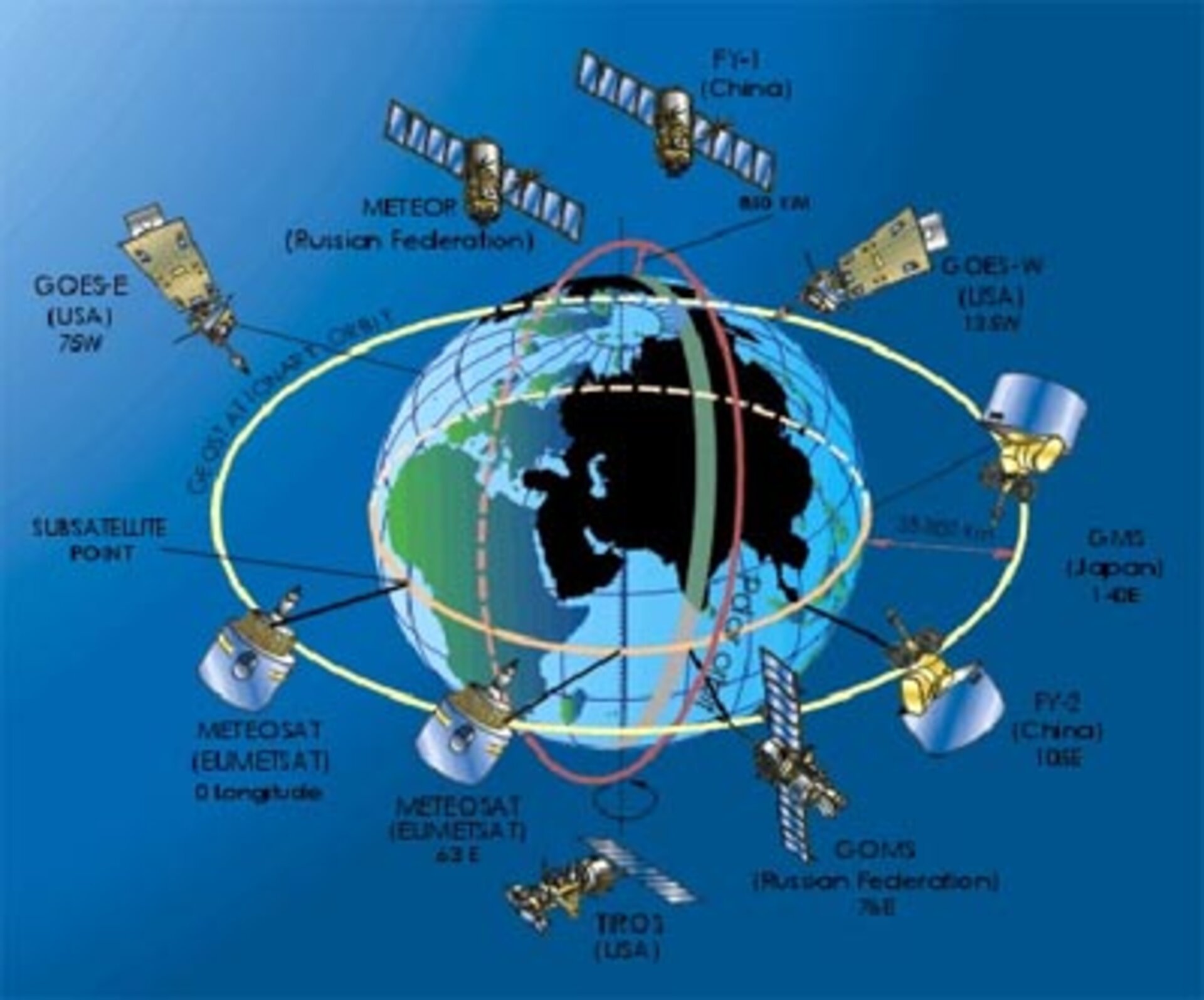 ESA is the architect of Europe's meteorological satellite system. By supplying daily images for the continent's weather forecasts for more than a quarter of a century, ESA's Meteosat series has become an integral part of European life.

In 1977 the first Meteosat satellite was placed into geostationary orbit above the equator at Africa's Gulf of Guinea. Six more Meteosat spacecraft were launched after it. Since that date they have ensured almost continuous delivery of images and other data to national meteorological services across Europe, Africa and the Middle East.

The first three Meteosats were solely funded and developed by ESA, and the Agency has continued to be responsible for the development of Meteosat hardware to the present day. Since 1 December 1995 the handling of day-to-day operations has been turned over to the 18-nation European Organisation for Meteorological Satellites (EUMETSAT), based in Darmstadt, Germany.

In addition, this series forms a vital part of the global network of geostationary weather satellites, continuously monitoring different parts of the globe from allocated points 36000 km over the equator.

Meteosat's main instrument is a scanning radiometer sensitive to visible and infrared radiation along a trio of spectral channels. The radiometer scans the Earth to create a new image of its surface and clouds every half an hour. The satellite also serves as a telecommunication satellite for relaying weather readings from remote buoys and ground stations, and distributing data to users.

In order to keep pace with technological developments and demand for more accurate long range forecasts, work began on an enhanced version of the Meteosat satellite in the early 1990s. This successor series is called Meteosat Second Generation (MSG).

It includes an improved radiometer called the Spinning Enhanced Visible and Infrared Imager (SEVIRI) that can record radiation from four times the number of wavelengths working at more than twice the resolution, and returning new images in half the previous time.

Also aboard is the Geostationary Earth Radiation Budget (GERB) experiment. GERB measures the long and short-wave radiation coming from our planet every 15 minutes, making possible a calculation of the Earth's overall radiation budget – the balance between the incoming radiation from the Sun and the radiation returned to space. MSG also carries an advanced communication payload.

MSG-1 was launched into geostationary orbit on 28 August 2002, and has since been redesignated Meteosat-8. The second MSG, MSG-2, was launched on 21 December 2005 on the same type of launcher as its predecessor - a standard Ariane 5 - from the same launch site - Kourou in French Guiana.

The reason for the duplication is simply to guarantee continuity of service in case of satellite failure. Weather satellites have become so crucial a part of our daily life that any long gap in service coverage has become inconceivable.

MetOp-A, launched on 19 October 2006 from Baikonur Cosmodrome in Kazakhstan, is the first in another trio of European weather satellites. Designed by ESA on behalf of Eumetsat, it is Europe's first polar-orbiting satellite for observational meteorology.

The MetOp series is Europe's contribution to a European-United States initiative called the Initial Joint Polar System, coordinated by the World Meteorological Organisation with the aim of increasing coverage over parts of the Earth neglected by existing satellite systems.

MetOp flies in an 800-km polar orbit corresponding to local 'morning' while the US is responsible for 'afternoon' coverage. The satellite carries a US-built instrument package providing continuity of meteorology data from existing systems, plus a new generation of European instruments to augment measurements of temperature, humidity and atmospheric ozone, along with wind speed and direction over the ocean.

To ensure that a continuous flow of accurate and timely satellite data is available to forecast the weather and study climate change in the coming decades, ESA is looking to the future by preparing the next generation of MetOp satellites. Set to debut in 2021, the MetOp Second Generation, MetOp-SG, will comprise three pairs of satellites that carry different packages to deliver enhanced and complementary meteorological information.