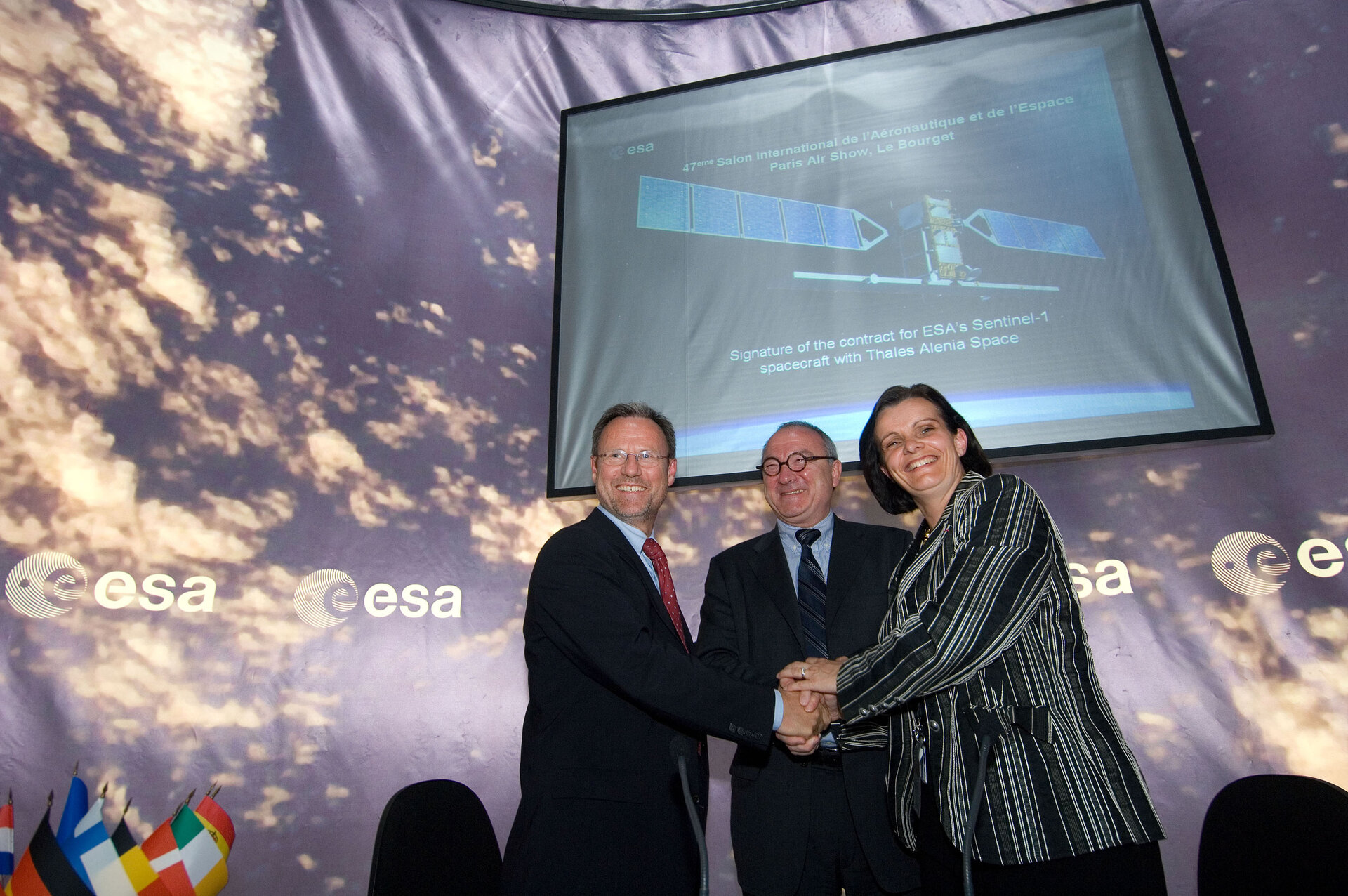 ESA and Thales Alenia Space have signed a €229 million contract for the design and development of Sentinel-1, the first Earth observation satellite to be built for Europe’s Global Monitoring for Environment and Security (GMES) programme.

ESA’s Director General, Jean-Jacques Dordain, and President and CEO of Thales Alenia Space, Pascale Sourisse, signed the contract on behalf of the Italian branch of the company Monday at the International Paris Air Show Le Bourget.

Speaking at the signing ceremony, ESA's Director of Earth Observation Programmes Mr Volker Liebig said: "Environmental monitoring, sustainable development and resource management clearly benefit from Earth Observation (EO) as an information source. Europe has a leading role in monitoring the environment, thanks to national and ESA satellites, among which Envisat is the biggest and most sophisticated environmental satellite of the world and has been operational for five years.

"GMES is the next logical step in the development of operational services under the European Commission to provide Europe with the environmental data to support political decisions as a global player, with particular emphasis on the issue of climate change. With today’s signature, we are another step closer towards the realisation of the GMES Programme."

"We are particularly proud of having won this contract, as it leverages our long and recognised experience in successful Earth observation missions dedicated to oceanography, climatology and meteorology," Sourisse said.

The ESA Sentinels, composed of five satellites, constitute the first series of operational satellites responding to the EO needs of the GMES programme, a joint initiative of the European Commission and ESA.

Sentinel-1 is expected to be launched in 2011 and will ensure the continuity of C-band Synthetic Aperture Radar (SAR) data with ESA’s ERS and Envisat satellites. Important applications driving the mission concept include marine – vessel detection, oil spill mapping and wind products – and sea ice mapping.

The Sentinel-1 spacecraft is expected to weigh around 2200 kilogrammes at launch and image the Earth in swaths of 250 kilometres in diameter with a ground resolution of five metres.

Sentinel-2 and 3 satellites, scheduled for launch in 2012, will support land and ocean monitoring, while Sentinel-4 and 5 will be dedicated to meteorology and climatology through atmospheric chemistry.

GMES is the response to Europe's need for geo-spatial information services. It provides autonomous and independent access to information for policy-makers, particularly in relation to environment and security.