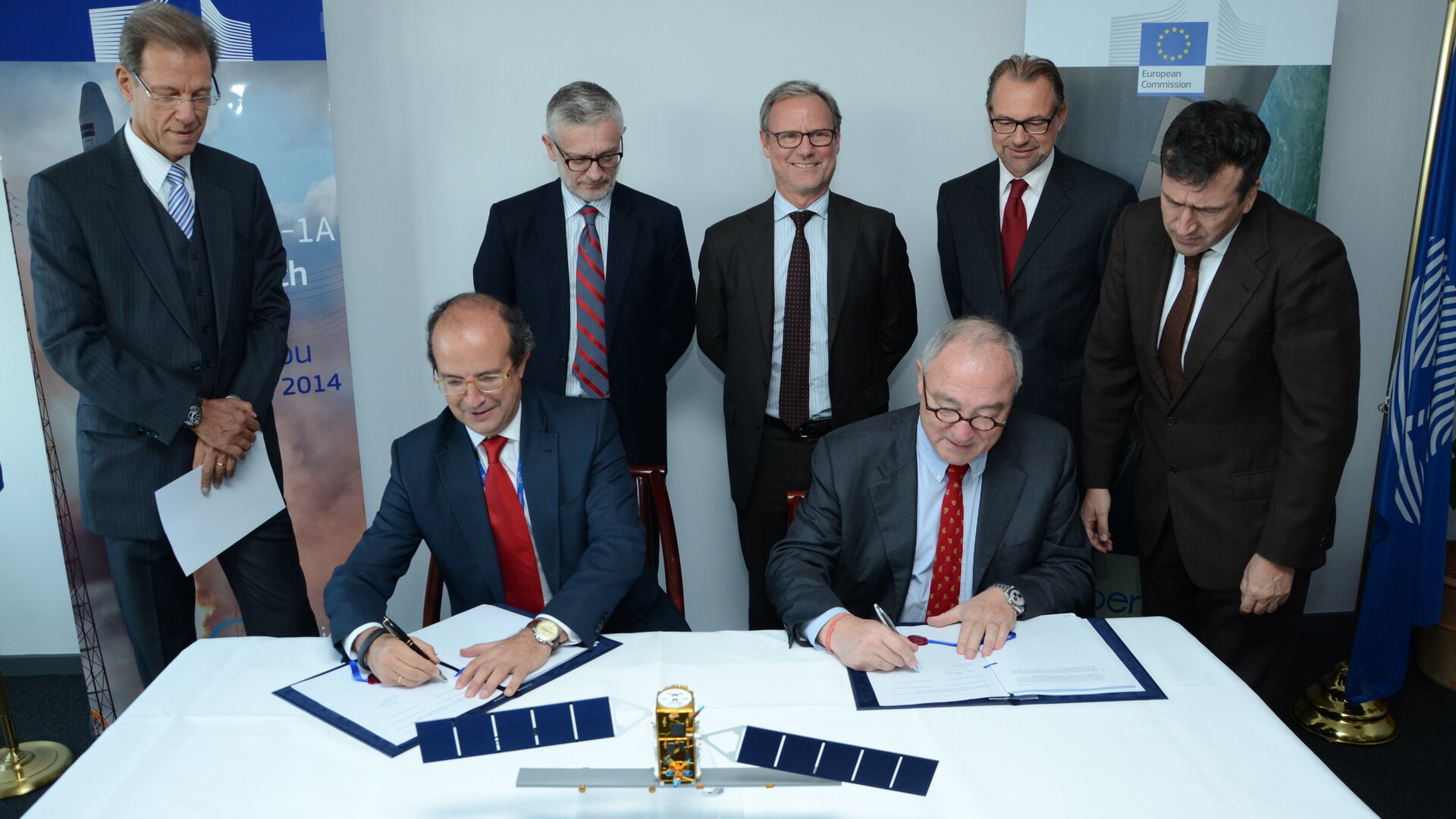 In a landmark agreement for Europe’s Copernicus programme, the European Commission and ESA have signed an Agreement of over €3 billion to manage and implement the Copernicus ‘space component’ between 2014 and 2021.

The Multiannual Financial Framework is a seven-year plan for the EU’s budget that includes the provision of about €4.3 billion for the Copernicus environment monitoring programme for the period 2014–20.

Copernicus is set to make a step change in the way we care for the planet by providing reliable, timely and accurate services to manage the environment, understand and mitigate the effects of climate change and help respond to crises.

The success of the programme relies on the provision of robust data, predominately from a fleet of Earth observation satellites called Sentinel, and supplemented by data from Member States’ satellites.

Under the Agreement signed today, about €3.15 billion of the money for Copernicus within the Framework will be delegated to ESA as coordinator of the ‘space component’, including the operation of the Sentinel satellites until mid-2021 and the building of follow-on units, which should last at least until 2028–30.

ESA will also act as the research and development agency for the next generation of Copernicus, a model relationship between the EU and ESA.

“The Copernicus programme is an excellent example of innovation and cooperation in Europe and the signature today marks a milestone in the cooperation between ESA and the EU,” said Jean-Jacques Dordain, ESA’s Director General.

“This Agreement has been negotiated in a constructive and cooperative spirit. It is proof of mutual understanding and trust, and will contribute to making Copernicus a success story.”

Today’s signature also marks the transfer of ownership of Sentinel-1A to the EU.

Signing on behalf of the European Commission was Daniel Calleja Crespo, Director General of the EC’s Directorate General Enterprise and Industry.

“With the signing of the Copernicus Agreement, the Copernicus Programme reached another key milestone this year. ESA’s technical competence will provide a solid and complementary partnership to build a sustainable space infrastructure,” remarked Mr Calleja.

“The European Union can be proud to own the dedicated Sentinel satellites. They will generate a wealth of data which will serve society in many different ways including by timely environmental monitoring as well as creating a thriving downstream sector.”

The satellite was launched on 3 April from Kourou, French Guiana, and provides radar data for an array of services related to, for example, natural hazards, land and ice monitoring, as well as for scientific research.

These data are available through the free and open data policy, providing economic benefits to many scientists and also to value-added companies. More than 4000 users have already registered.