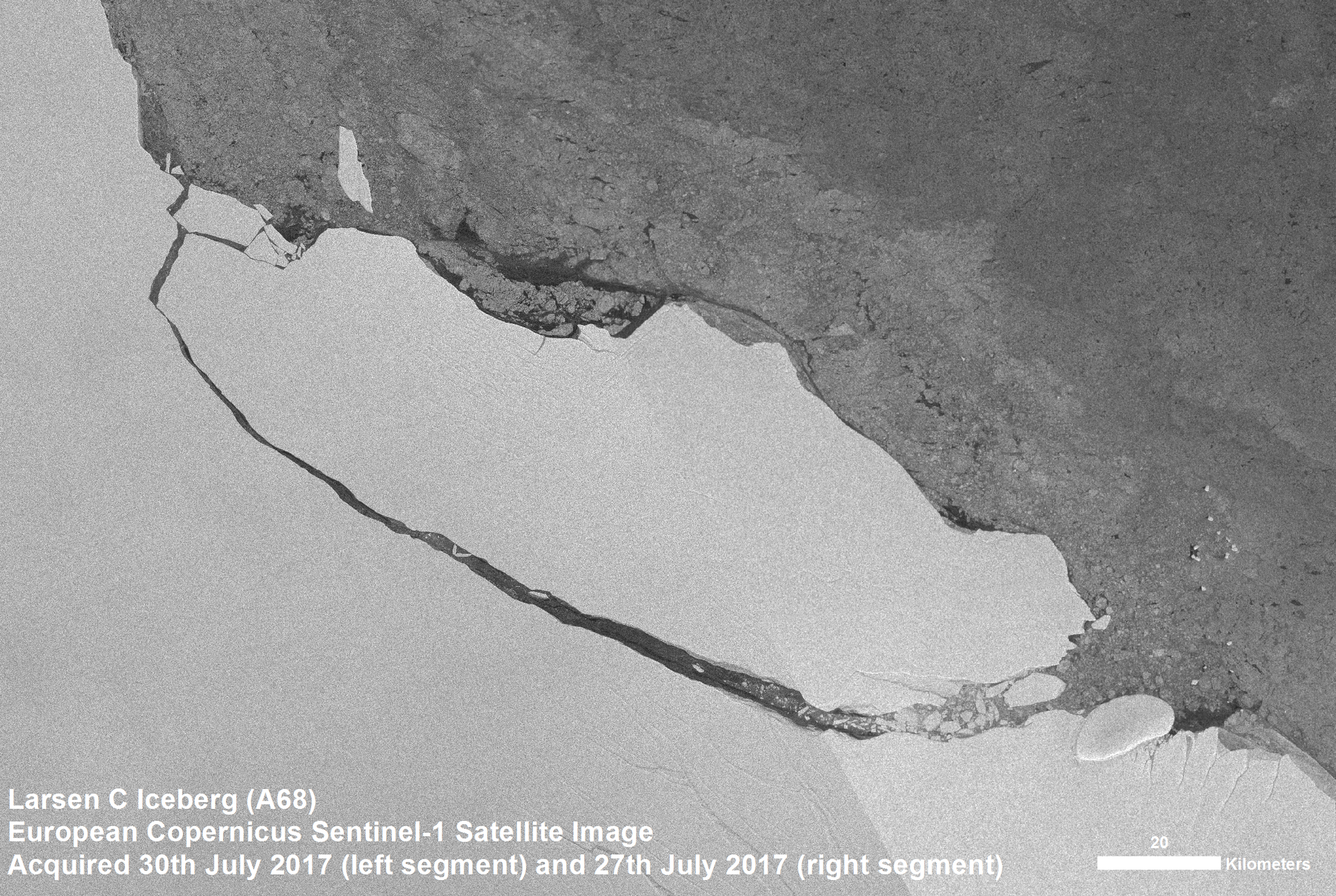 Thanks to the satellite era, we recently witnessed the birth of one of the biggest icebergs on record. While the breakup of Antarctica’s Larsen C ice shelf hit the headlines around the world, this dramatic event also presents scientists with a unique opportunity to learn more about ice-sheet stability.

On 12 July, Europe’s Copernicus Sentinel-1 mission returned radar images showing that a lump of ice more than twice the size of Luxembourg had broken off the Antarctic Peninsula.

Since then, this large tabular iceberg – known as A68 – has drifted about 5 km from the ice shelf. Images from Sentinel-1 also show that a cluster of more than 11 smaller icebergs has now also formed, the largest of which is over 13 km long.

These ‘bergy bits’ have broken off both the giant iceberg and the remaining ice shelf.

Anna Hogg from the University of Leeds, UK, commented, “Our ability to routinely monitor rapidly unfolding events such as this has been revolutionised in the last few years by European investment in the Copernicus satellites.”

Since Antarctica is in the dark winter months, radar images are indispensable because, apart from the region being remote, radar continues to deliver images regardless of the dark and bad weather.

“The year-round all-weather imaging capability of Sentinel-1, combined with its frequent revisits, has been an invaluable resource,” said Dr Hogg.

While it is certainly interesting to now postulate about the future path and eventual demise of A68, it is arguably more important to understand how the ice shelf will respond to being 10% smaller.

Reporting this week in Nature Climate Change, Dr Hilmar Gudmundsson from the British Antarctic Survey and Dr Hogg examine the lead up to the calving and discuss these events affect the stability of Antarctic ice shelves.

“The satellite images reveal a lot of continuing action on Larsen C ice shelf.  We can see that the remaining cracks continue to grow towards a feature called Bawden Ice Rise, which provides important structural support for the remaining ice shelf,” continued Dr Hogg.

“If an ice shelf loses contact with the ice rise, either through sustained thinning or a large iceberg calving event, it can prompt a significant acceleration in ice speed, and possibly further destabilisation. It looks like the Larsen C story might not be over yet.”

Dr Gudmundsson explained, “Although floating ice shelves have only a modest impact on of sea-level rise, ice from Antarctica’s interior can discharge into the ocean when they collapse.

Consequently, we will see increase in the ice-sheet contribution to global sea-level rise.

“With this large calving event, and the availability of satellite technology, we have a fantastic opportunity to watch this natural experiment unfold before our eyes.

“We can expect to learn a lot about how ice shelves break up, and how the loss of a section of an ice shelf affects the flow of the remaining parts.” 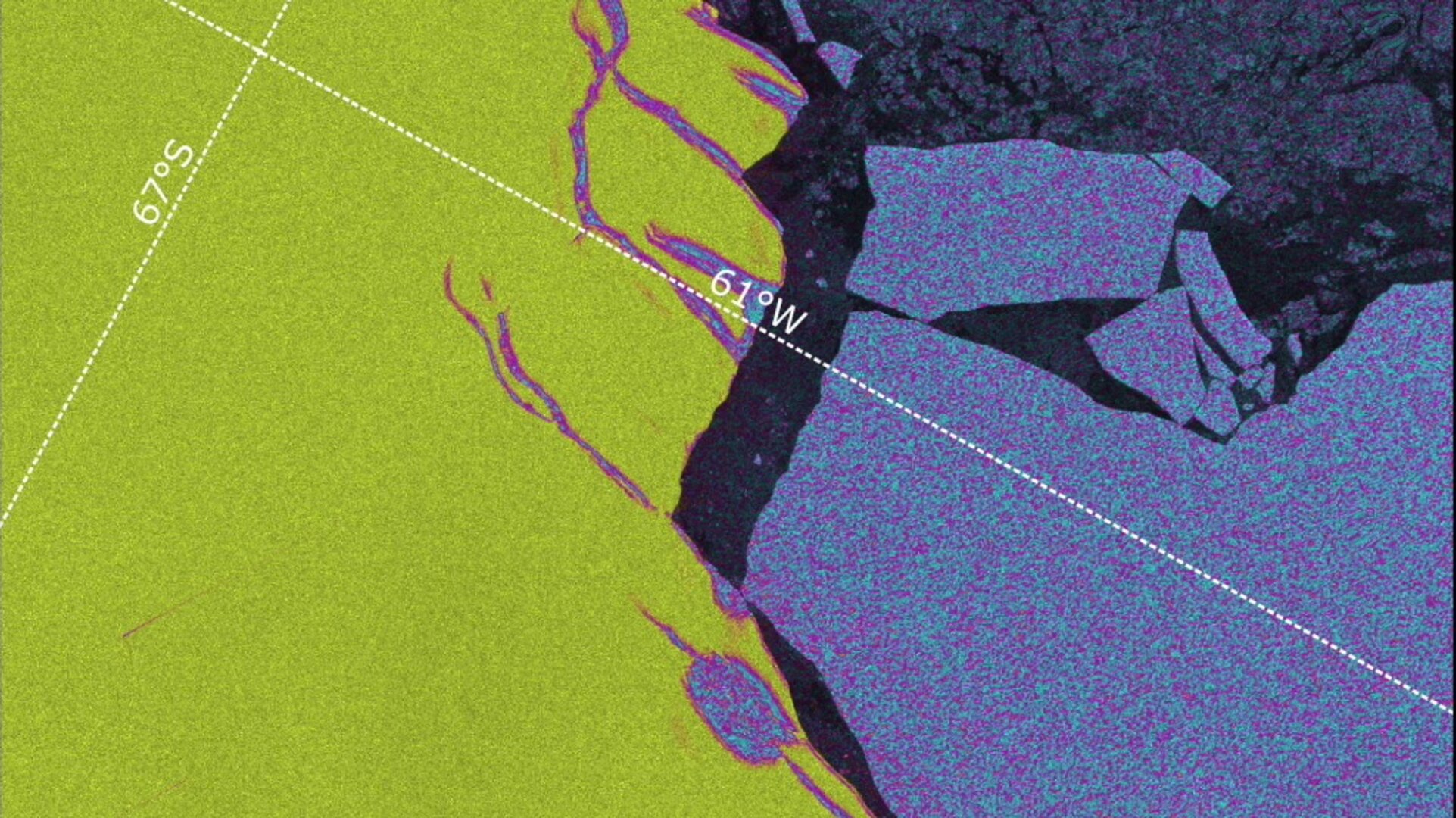 Ice-shelf retreat on the Antarctic Peninsula has been observed throughout the satellite era – about 50 years. Large sections of the Larsen A and B ice shelves and the Wilkins ice shelf collapsed in a matter of days in 1995, 2002 and 2008, respectively.

With today’s Copernicus monitoring system we are now far better placed not only to observe events in remote places like Antarctica but also, importantly, to turn theoretical understanding of complex processes into hard science.