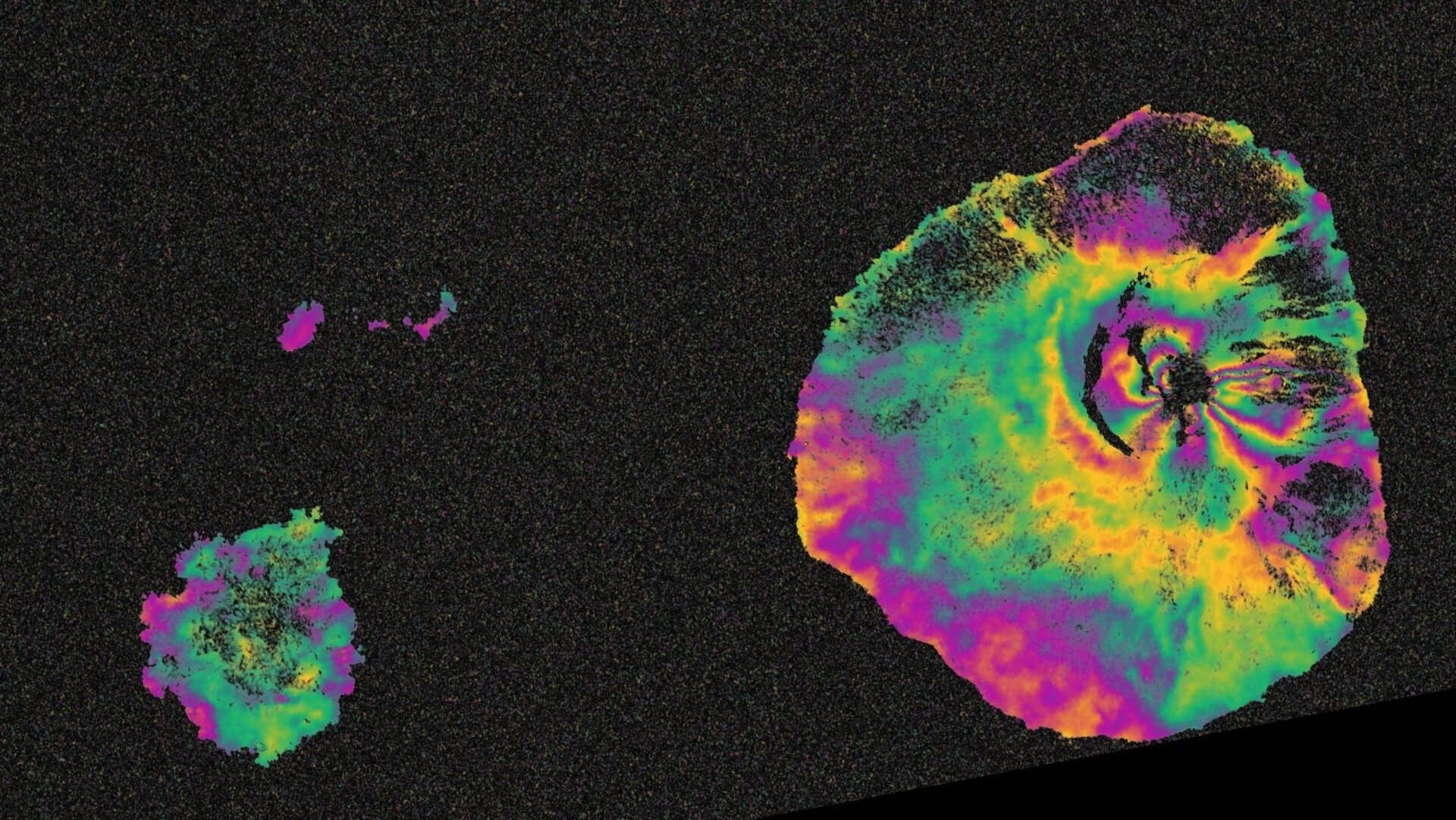 Radar images from the Sentinel-1A satellite are helping to monitor ground movements of the recently erupted Fogo volcano.

Located on Cape Verde’s Fogo island, the volcano erupted on 23 November for the first time in 19 years and has been active ever since. Lava flows are threatening nearby villages, and local residents have been evacuated.

Radar scans from the Sentinel-1A satellite are being used to study the volcano. The image above – an ‘interferogram’ – is a combination of two radar images from 3 November and 27 November, before and during the eruption.

Deformation on the ground causes changes in radar signals that appear as the rainbow-coloured patterns.

Scientists can use the deformation patterns to understand the subsurface pathways of molten rock moving towards the surface. In this case, the radar shows that the magma travelled along a crack at least 1 km wide.

“By acquiring regular images from Sentinel-1, we will be able to monitor magma movement in the subsurface, even before eruptions take place, and use the data to provide warnings,” said Tim Wright from the University of Leeds and director of the UK Natural Environment Research Council’s Centre for the Observation and Modelling of Earthquakes, Volcanoes and Tectonics.

This is particularly valuable in places with few sensors on the ground.

“With this stunning result, the great potential of Sentinel-1 for geophysical applications has been once again unequivocally demonstrated,” said Yngvar Larsen from Norway’s Northern Research Institute, and science leader of ESA’s InSARap project.

Dr Larsen and his team were also involved in mapping the earthquake that struck California’s Napa Valley earlier this year.

Launched in April, Sentinel-1A is the first in a fleet of satellites being developed for Europe’s Copernicus environment monitoring programme. With its radar vision, the Sentinel-1 mission provides an all-weather, day-and-night supply of imagery of Earth’s surface.

Sentinel-1A passes over the same spot on the ground with the same viewing geometry every 12 days. However, once its identical twin, Sentinel-1B, is launched in 2016, this will be cut to just six days, so that changes can be mapped even faster.

“The coverage and repeat visit time of Sentinel-1 is unprecedented and we are currently working on a system that will use Sentinel-1 to monitor all of the visible volcanoes in the world,” said Andy Hooper, also from the University of Leeds.