Multiple satellites, including Europe’s Sentinels, have captured images of two large icebergs that broke away from Antarctica’s Nansen ice shelf on 7 April.

The icebergs are drifting to the northeast, propelled by wind, tides and currents. Experts say they do not pose any immediate threat of blocking supply routes to research stations such as the Italian Mario Zucchelli and South Korean Jang Bogo Stations in Terra Nova Bay.

Nonetheless, the icebergs may pose a threat to sea-floor moorings in the region that have been used by Italy’s National Antarctic Programme since the 1990s, and more recently by New Zealand ocean scientists.

The Nansen ice shelf, around 50 km long and 25 km wide, developed a fracture over recent years. Ice shelves are particularly sensitive to climate change because they can melt from warm air at the surface and warming ocean waters below.

“The crack was first observed during fieldwork in 1999 and was progressively growing, and then accelerating during 2014,” said Massimo Frezzotti from Italy’s ENEA research organisation.

“The events following were typical for a cycle of ice-shelf calving. Last century, a first calving event is known to have occurred between 1913 and the 1950s, with a second between 1963 and 1972.”

As winter weather began to set in during early March this year, optical images from Europe’s Sentinel-2A satellite and radar images from Sentinel-1A, together with images from the Italian Cosmo-Skymed mission, indicated that the ice front was only tenuously attached to the shelf. 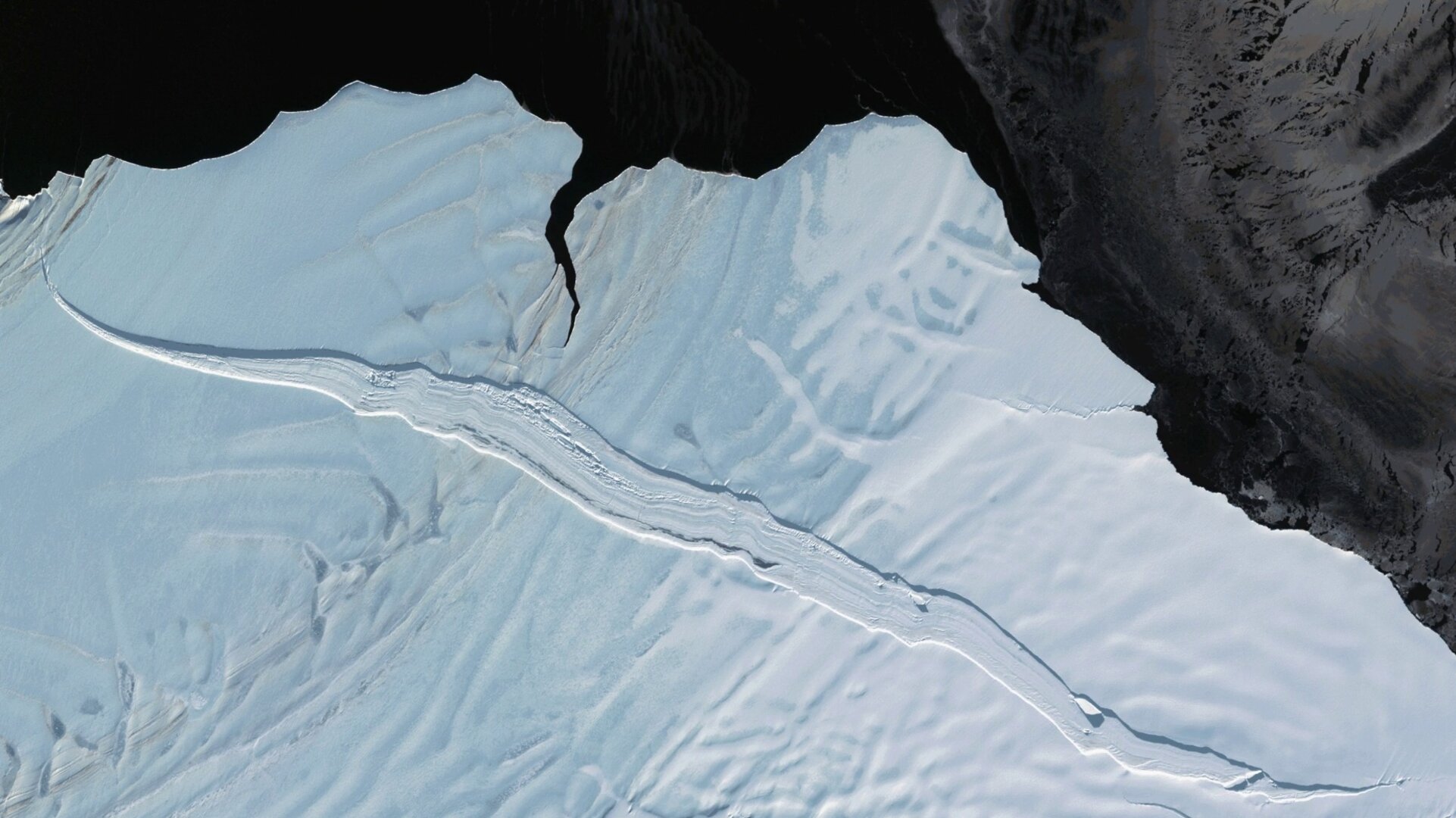 By 6 April, the fracture had reached about 40 km long before it severed the portion of the ice front between Inexpressible Island to the north and the Drygalski Ice Tongue – the floating end of the David Glacier – to the south.

“The area of the fracture was still negligible at the beginning of 2014, but between April 2015 and March 2016 it expanded from 11.68 sq km to 25.87 sq km, signalling a coming calving,” said Flavio Parmiggiani of Italy’s ISAC-CNR research organisation.

The fracture split the ice shelf along its length, resulting in two large icebergs measuring about 10 km and 20 km in length and 5 km across. Published research indicates that the bergs are likely to be around 250–270 m thick.

Massimo Frezzotti explained, “History has shown that major calving typically occurs about every 30 years. The crack opened because of a difference in the velocity of ice between the northern Priestley Glacier and southern Reeves Glacier fed portions of the ice shelf, caused by the southern part being hooked and pulled along by the faster moving Drygalski Tongue.”

The Sentinels are a fleet of satellites for Europe’s Copernicus environment monitoring programme. The second in the Sentinel-1 constellation, Sentinel-1B, is set for launch on 22 April.

“This event illustrates the complexity of the constantly evolving Antarctic icescape,” said ESA’s Mark Drinkwater and Chair of the Polar Space Task Group.

“Copernicus data already provide a critical source of sustained data for studying the impact of the climate on the polar cryosphere over the next decades.”

This unique combination of Sentinel high-resolution optical and radar images, together with information from other missions, demonstrates how satellites are invaluable sources of data to the study of ice shelf calving. This allows researchers to monitor the future response of the glaciers to the removal of the ice shelves, improving ice sheet modelling and predictions.

Enrico Brugnoli, Director of Italy’s CNR National Research Council Earth and Environment Department, commented, “This event has happened so close to our Mario Zucchelli coastal station and it is the first time satellites have captured an event of this size since Italy has been operating in the area in 1985.”