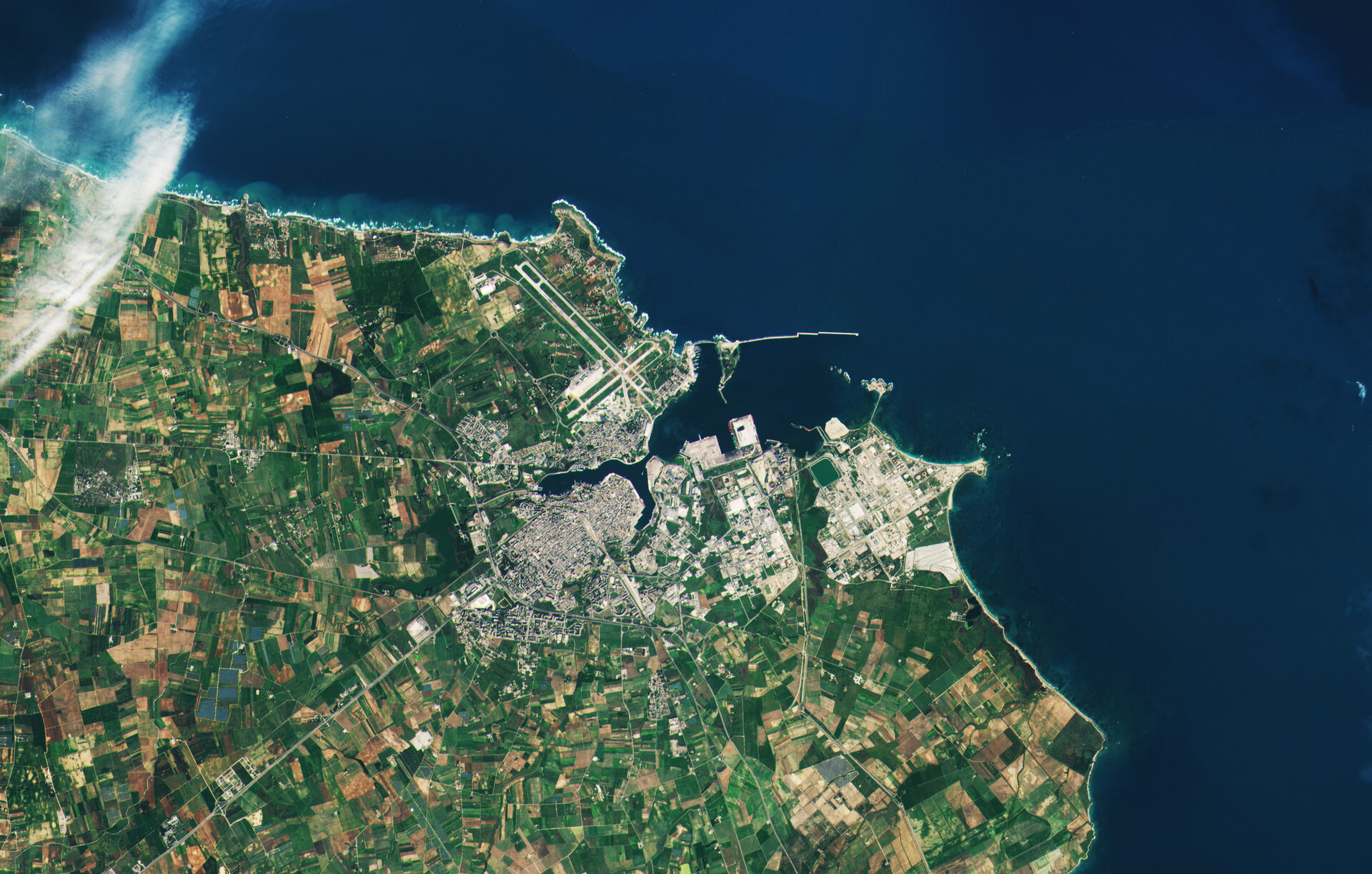 Just over a week after being lofted into orbit, the European Union’s Sentinel-2B satellite delivered its first images of Earth, offering a glimpse of the ‘colour vision’ it will provide for the Copernicus environmental monitoring programme.

With a swath width of 290 km, the satellite’s first acquisition began over the Baltic Sea and made a strip-like observation through eastern Europe, ending in northern Libya.

The data were relayed in real time to the Matera ground station in Italy, where the images were then processed.

While eastern Europe was mostly cloudy, Italy’s sunny skies allowed the teams to get their first glimpse of the multispectral instrument’s capabilities over southern Italy’s Calabria and Apulia regions, the latter often referred to as the ‘heel of the boot’.

One of more distinctive features of this first acquisition is Apulia’s port city of Brindisi – appropriately the same word for the ‘toast’ ritual in Italian. Other areas captured in the first pass include the town of Crotone in Calabria and part of Albania's coast.

The multispectral imager is being calibrated during the commissioning phase – which will take about three months.

Sentinel-2B is the second in the two-satellite mission for Europe’s Copernicus programme. Its twin Sentinel-2A was launched in June 2015. Now that both are in orbit, Sentinel-2 provides repeat coverage every five days.

In addition to demonstrating the high resolution of 10 m per pixel, these initial data foreshadow the mission’s land-monitoring applications in areas such as agriculture, coastal waters and land-cover mapping.

“Sentinel-2B will be one of the workhorses of Copernicus, as it will enable a whole range of applications with a focus on land,” said Josef Aschbacher, Director of ESA’s Earth Observation Programmes.

“With the second Sentinel-2 satellite in orbit, we now have much better coverage – which is especially important for monitoring areas frequently covered by clouds.

“The Copernicus Services in the areas of land and coastal monitoring rely on Sentinel-2 data,” said Philippe Brunet, Director for Space Policy, Copernicus and Defence at the European Commission.

“With the launch of the B-unit, the quality of the data products will increase and Copernicus can better manage and protect the environment and natural resources, as well as improve civil security.

Six families of Sentinel satellites will make up the core of EU’s Copernicus environmental monitoring network. An EU flagship space initiative, Copernicus provides operational information on the world’s land surfaces, oceans and atmosphere to support environmental and security policymaking, and meet the needs of citizens and service providers.