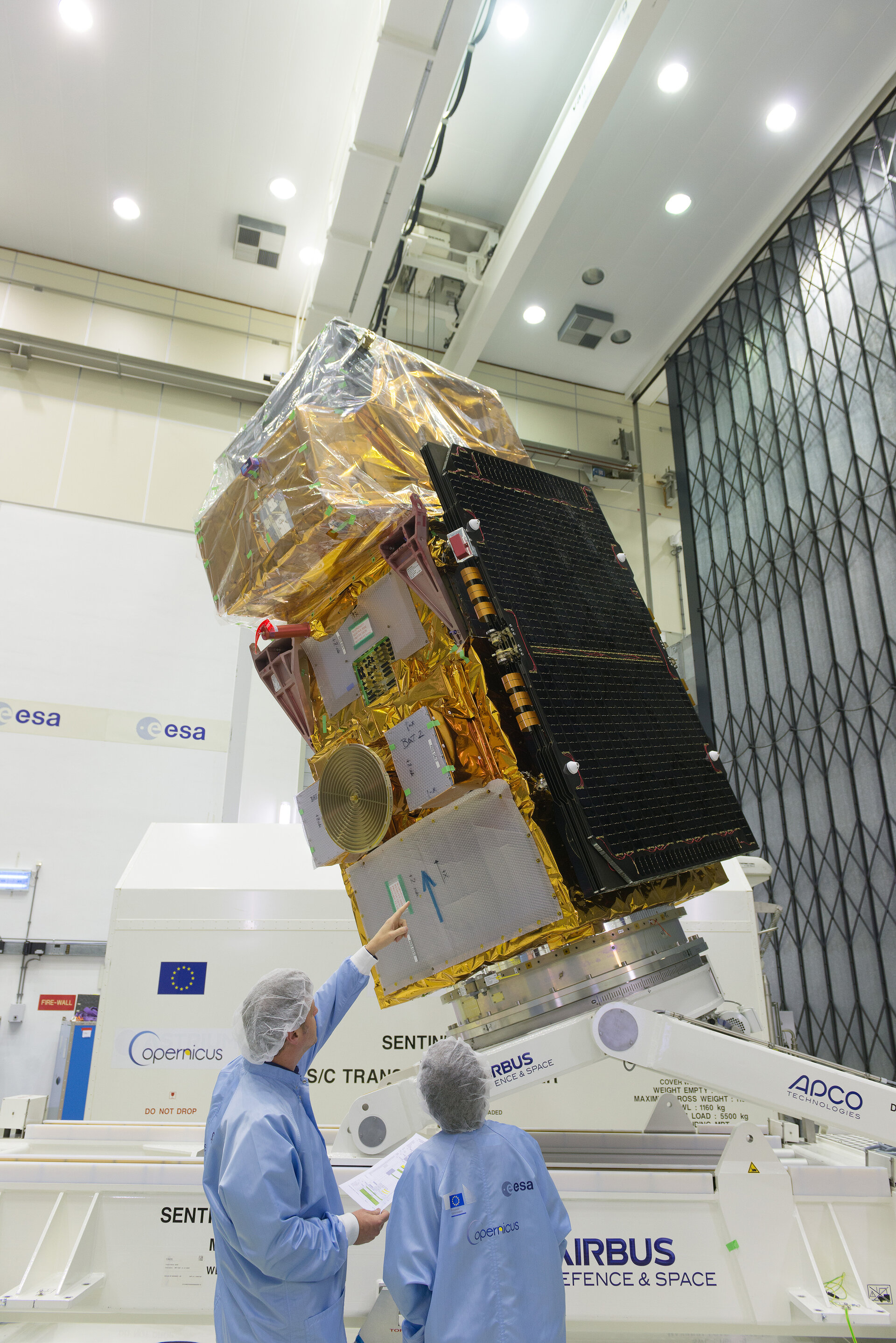 Just weeks before Sentinel-2B is packed up and sent to French Guiana for its launch next March, media representatives and specialists got one last look at the second satellite for Europe’s Copernicus programme.

At an event held at ESA’s site in the Netherlands – where the satellite has been undergoing testing since June – ESA and Airbus Defence and Space project managers gave journalists an overview of how the satellite was built and tested, and its numerous benefits.

“It’s a European satellite, built by more than 60 contractors from 15 countries,” noted Michael Menking from Airbus, the prime contractor leading the industrial consortium. Twenty-nine of the companies were small- or medium-sized.

Sentinel-2 is designed as a two-satellite constellation: Sentinel-2A and -2B. Sentinel-2A was launched on 23 June 2015 and has been providing routine imagery for the EU Copernicus Land Monitoring Service, among others. Once Sentinel-2B is launched and operational, the constellation will cover the globe every five days.

Information from this mission is helping to improve agricultural practices, monitor the world’s forests, detect pollution in lakes and coastal waters, and contribute to disaster mapping, to name a few.

“Sentinel-2B will be the fifth satellite launched for Copernicus,” said Josef Aschbacher, Director of ESA’s Earth Observation Programmes. “The Sentinels already in orbit are providing massive amounts of data: 6.5 petabytes so far.

“While handling these data is a major challenge, the large amount being downloaded by users is testament to their worth.”

More data are downloaded by Sentinels every day than are uploaded to Facebook in the form of photos.

“The free and open data policy is one of the key achievements of Copernicus, and is also the key to its success,” said Andras Roboz, Policy Officer for the European Commission’s Copernicus unit. Sentinel-2 supports EU policies and stimulates economic growth, particularly for small businesses.

But before a satellite can deliver data, it must arrive in working order in orbit. While in the Netherlands, Sentinel-2B has been subjected to the vibrations and noise of launch, undergone solar array deployment, and sat in a thermal–vacuum chamber to simulate the harsh space environment.

Once the tests are completed, the satellite is expected to be cleared for shipping on 5 January to Europe’s Spaceport in Kourou, French Guiana.