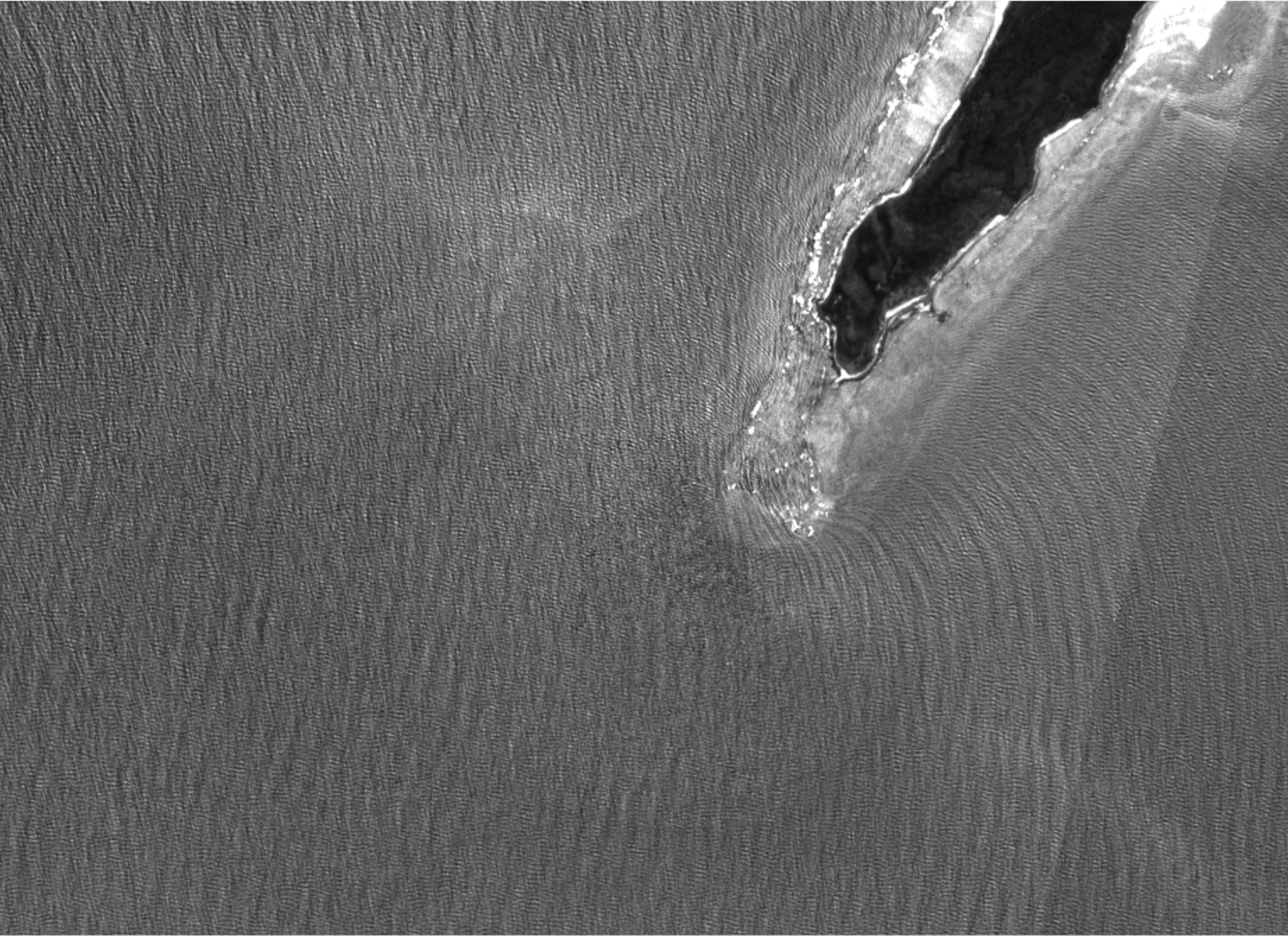 Sentinel-2A is demonstrating how it can be used to help forecast ocean waves around our coasts: sunlight reflected from the water surface reveals complex waves as they encounter the coastline and seafloor off the tip of Dorre Island, Western Australia.

Measuring ocean waves from buoys and ships is difficult, so developing new ways of measuring these features from space is key to keeping safe at sea and to understanding our oceans.

Surface waves are generated by the wind. The faster and longer the wind blows and the bigger the area over which it blows, the larger the waves.

As well as providing essential safety information for mariners, wave forecasts are also important for other activities at sea.

When designing ships or offshore structures, engineers need to know how big the biggest waves could be to ensure their structures are sound, for example.

Ocean waves also slow down the passage of ships, threaten industries such as oil and gas extraction, damage aquaculture and offshore wind farms, and erode coastlines.

They also play a role in the exchange of heat and gases such as carbon dioxide between the sea and atmosphere.

Internal waves, surface currents, fronts and eddies, for example, as well oil slicks and algae blooms, also affect surface roughness. Each is the fingerprint of complex ocean processes in the upper ocean and lower atmosphere.

The image above, which was taken by the Copernicus Sentinel-2 satellite on 1 October 2015, shows the reflection of sunlight from the sea. Importantly, it reveals the complex patterns of waves as they interact with the coastline and seafloor off Shark Bay at the tip of Dorre Island, Western Australia.

Several superimposed wave sets that have been reflected and bent by the coastal features and the shape of the seabed can be seen. Longer swell waves are also evident, with surf and breaking waves at the coastline itself.

Such images provide a unique view of the complex and alluring beauty expressed by the sea surface.

The fine detail provided by Sentinel-2A’s multispectral camera provides a view of the tilting facets of the waves.

“Scientists at OceanDataLab processed the data to determine the distribution of ocean waves and the direction they are heading. This is extremely important for anyone working at sea.”

Dr Fabrice Collard from OceanDataLab in France said, “Sentinel-2A’s multispectral imager has an exceptional talent to measure waves and ocean currents in coastal zones, which allows us to exploit its data for new applications.”

Sentinel-2A was launched in June 2015 primarily for the Copernicus land services. For example, it is being used to monitor the health of the world’s vegetation and changes in the way land is used. However, results such as these demonstrate how versatile this satellite is and how it will complement information provided by the other Sentinel-1 and Sentinel-3 missions.

Bianca Hoersch, ESA’s Sentinel-2 mission manager, said, “Sentinel-2A provides imagery extending at least 20 km off coastlines to capture processes and interactions between the land and the ocean such as sediment transport and coastlines ‘on the move’.

“However, depending on the geometry between the satellite overpass and coastline, in some parts of the world this leads to considerably larger portions of coastal waters being imaged.”

“Results such as those generated by OceanDataLab are unexpected. Thanks to the high quality of the imager, these new results clearly show the high potential for new applications to complement the Sentinel-1 and Sentinel-3 missions.”