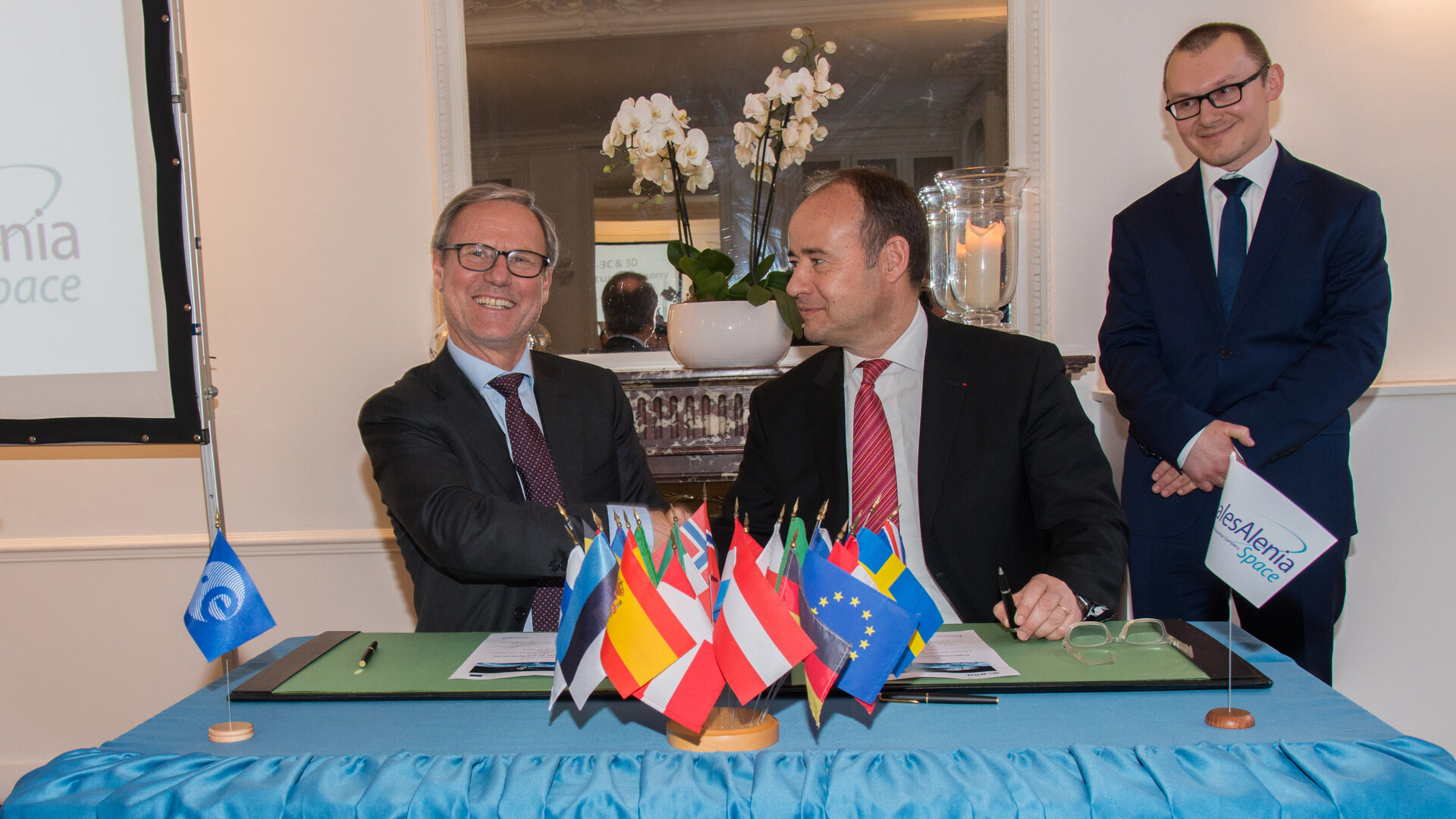 The signature of a €450 million contract to build two more satellites for the Sentinel-3 mission was celebrated by ESA and Thales Alenia Space of France at an event in Paris yesterday.

Sentinel-3 is based on a constellation of two satellites to systematically measure Earth’s oceans, land, ice and atmosphere to monitor and understand large-scale global dynamics.

The first – Sentinel-3A – is set for launch next week, while its sister satellite Sentinel-3B planned for launch in 2017.

While Thales Alenia Space has been leading a consortium of more than 100 companies to build the first two units, the contract signed yesterday initiates the development of Sentinel-3C and -3D, ensuring data continuity for Europe’s environment monitoring Copernicus programme until 2030.

“This is another demonstration of how ESA is able to manage an outstanding industry team in order to develop satellite missions which benefit the people of Europe and support environmental monitoring,” said ESA Director General Jan Woerner.

CEO of Thales Alenia Space, Jean-Loïc Galle, also noted: “The upcoming launch of Sentinel-3 and the outlook for the future Sentinel missions show that European industry is capable of developing and building high-tech missions in collaboration with ESA and partners throughout Europe.”

The Copernicus programme relies on the Sentinels and contributing missions to provide data for monitoring the environment and supporting civil security activities, and Sentinel-3 carries a series of cutting-edge instruments to do just that.

Over oceans, it measures the temperature, colour and height of the sea surface as well as the thickness of sea ice. These measurements will be used, for example, to monitor changes in sea level, marine pollution and biological productivity.

Over land, this innovative mission will monitor wildfires, map the way land is used, provide indices of vegetation state and measure the height of rivers and lakes, complementing the high-resolution measurements of its Sentinel-2 sister mission.

“With the third dedicated satellite ready for launch next week and several more in the planning, the European Copernicus programme is now becoming more and more a reality,” said the Director of ESA’s Earth Observation Programmes, Volker Liebig.

“By the end of next year, seven satellites will be in orbit forming the first generation of dedicated Copernicus satellites. This demonstrates what European collaboration can achieve and will allow Europe to better confront the challenges ahead concerning our planet.”