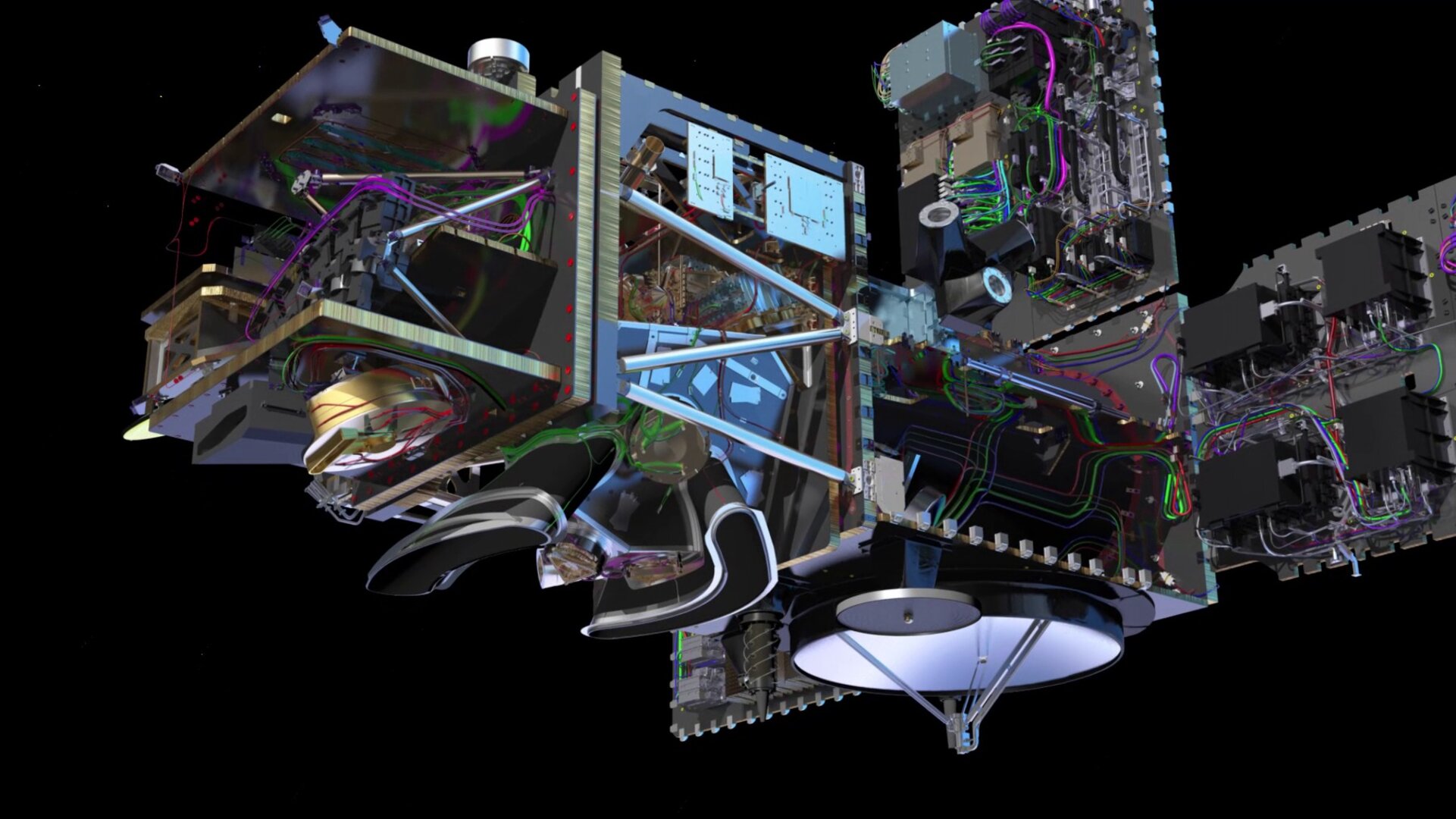 Building a satellite is a complex business, most of which goes on in the confines of a cleanroom. This new animation shows the upcoming Sentinel-3 satellite stripped bare, revealing its inner glory – a view normally only granted to the engineers responsible for piecing together this extraordinary technology.

Of all the Copernicus Sentinel satellites, Sentinel-3 is arguably the most comprehensive. Carrying a suite of state-of-the-art instruments, it will systematically monitor Earth’s oceans, land, ice and atmosphere to understand large-scale global dynamics and provide critical information for ocean and weather forecasting.

While it would be great to allow people to come and take a look at this technological marvel during construction, the work is carried out in cleanrooms to prevent the sensitive instruments from being contaminated. Even then, it would be difficult to show the details hidden within the satellite.

To compensate for this, the engineering drawings have been translated into a faithful animation of Sentinel-3, revealing all.

The animation is beautiful and detailed, including a glimpse of the satellite’s ocean and land colour instrument, its sea and land surface temperature radiometer, synthetic aperture radar radiometer and microwave radiometer.

These all build on the highly successful instruments carried on the Envisat and CryoSat satellites.

They will be used to measure different aspects of ocean waters, such as the temperature and colour of the surface waters, height of the sea surface, and sea-ice thickness. These measurements will be used, for example, to monitor changes in sea level, marine pollution and biological productivity.

Over land, this innovative mission will map the way land is used, provide indices of vegetation state and measure the height of rivers and lakes. In addition, Sentinel-3 will monitor wildfires.

The mission is based on a constellation of twin satellites in the same orbit, 180° apart, for optimum global coverage and data delivery. For example, with a swath width of 1270 km, the ocean and land colour instrument will provide global coverage every 1–2 days. Data are free of charge and open to users worldwide.

“Thanks to the Copernicus free and open data access policy, data are available to everyone, which will help to ensure the best scientific support to Sentinel-3 and the Copernicus operational system.”

The satellite has been designed and built by a consortium of around 100 companies under the leadership of Thales Alenia Space.

The first satellite, Sentinel-3A, is scheduled to be launched from Plesetsk in northern Russia in the fourth quarter of 2015, and Sentinel-3B will be launched from Kourou in French Guiana in 2017, ensuring an operational mission for the next 7–10 years.

An additional two Sentinel-3 satellites are being procured to ensure continuity of the mission for the next 20 years at least.