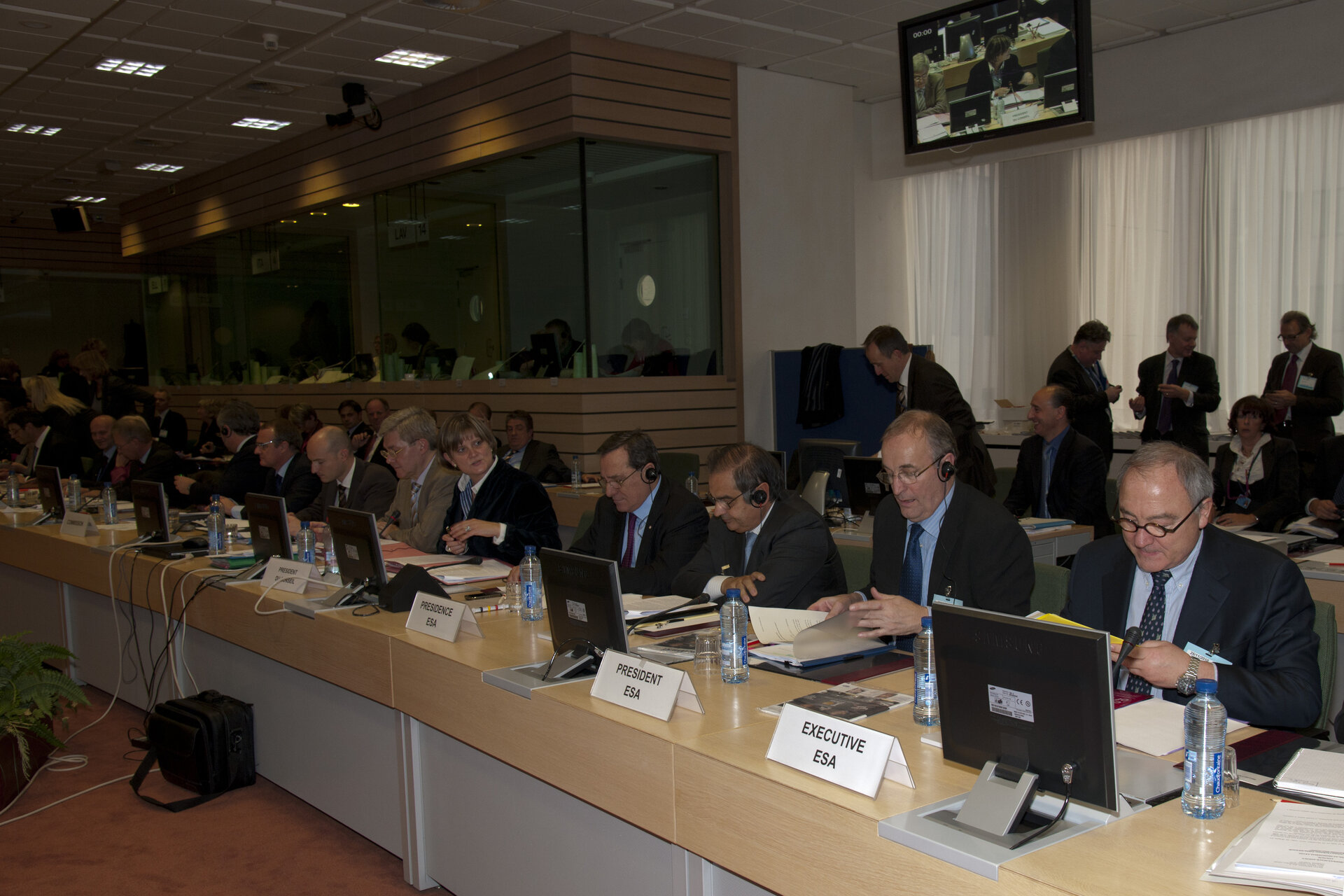 ESA PR 2010-26 Ministers in charge of space activities representing the Member States of the European Space Agency and the European Union met in Brussels today for the Seventh Space Council.

Today's Council was jointly chaired by Sabine Laruelle, the Belgian Minister of Small and Medium Enterprises, the Self-employed, Agriculture and Science Policy, on behalf of the EU Competitive-ness Council, and Giuseppe Pizza, Italian State Secretary in the Ministry of Education, University and Research, on behalf of the ESA Council at Ministerial Level.

The Space Council unanimously endorsed a resolution that called for the necessary actions to deliver a space strategy that would enable economic growth, respond to public policy objectives and develop the vocations of science and technology in Europe.

Ministers emphasised that the flagship programmes Galileo and GMES (Global Monitoring for Environment and Security) remain the priorities for the EU in space and identified the key decisions to be taken in these areas over the coming months.

In the areas of Global Climate Change and Security, the ministers asked the European Commission and the Director General of ESA to collaborate with the Member States and other relevant actors in Europe to identify how to fill gaps in existing space capabilities.

Ministers also recognised the need to move towards establishing a Space Situational Awareness capability for the protection of Europe's space assets. They stressed the need for Europe to voice a single European position in international discussions on space exploration.

Following on from the 16 September conference 'Space for the African Citizen' and taking account of the expected inclusion of space in the communication for the EU-Africa Summit, to be held in Libya on 29 and 30 November, the Space Council called for expanded partnerships with the African Union, the Regional Economic Groupings and African nations to build capacities for acquiring and exploiting space systems.

Aware that the EU-ESA Framework Agreement, under which the Space Council was established, has been extended until May 2012, ministers of the EU and ESA invited the European Commission and the Director General of ESA respectively to conduct an evaluation by May 2011 of the experience gained under that agreement.

ESA Director General Jean-Jacques Dordain emphasised the progress that had been achieved in space missions since the previous Space Council meeting in May 2009, adding:

The entry into force of the Treaty on the Functioning of the European Union, with a specific space competence, is good news for space, good news for Europe and good news for ESA. It allows us not to do the same thing differently but to do more, together.

The full Resolution text can be found at: http://consilium.europa.eu/