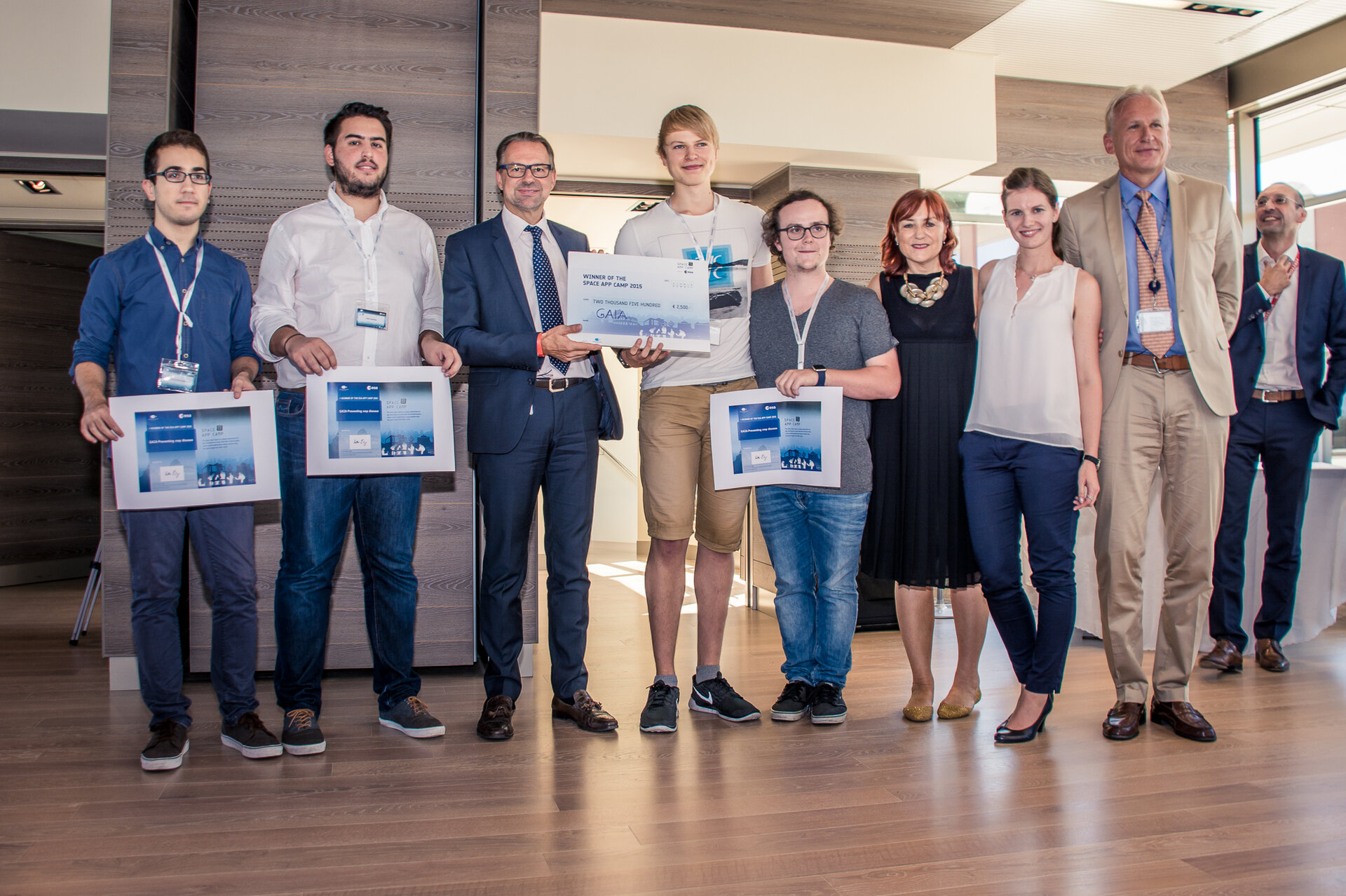 Using satellites to predict plant and crop diseases is just one of the fresh ideas produced over a week-long camp dedicated to creating mobile apps using Earth observation data.

Their aim was to bring Earth observation data – particularly from the European Copernicus programme – to the everyday user through smartphones.

Each of the teams had a week to create an app from one of five areas: agriculture, emergency and rescue management, environmental protection, marine environments and maritime transportation, or lifestyle and tourism.

Yesterday, the teams presented their apps to a panel of judges from ESA and partner companies, who ranked the projects based on innovation, relevance for Copernicus, market and business value, feasibility of the concept and overall presentation.

Thomas Beer, ESA’s Copernicus Policy Coordinator, said: "This year's participants have been particularly skilled and ambitious. It was a pleasure to see them working hard and interacting with our coaches, helping them to create a perfect prototype app. I hope that each of the six groups will apply for ESA business incubator support."

The GAIA App won the challenge by proposing the use of satellite data for agriculture, matching areas of interest with possible diseases. This would allow farmers to benefit from early warnings, for evaluating crops at risk. It could also provide tips on how to respond to possible dangerous situations in their fields.

With four participants representing Germany, Greece, Austria and Spain, the winners had the youngest member ever on their team. Germany’s Pascal Weinberger is only 18 years old and recently finished secondary school, while the other three winners, John Zachilas, Lukas Böhler and Pablo Garcia-Nieto Rodriguez, are all university students in computer science and electrical engineering.

John Zachilas from Greece stated: “It was great and extremely interesting to meet such people, since not many of my friends in Greece are into such things.”

Each member of the winning team was presented with a cash prize of €625. All teams were encouraged to apply to one of ESA’s 19 Business Incubation Centres to develop their ideas further.

“These satellites, due to the free and open data policy, will increasingly become a widely available information source to inform European citizens about the state of our planet.

“The App Camp participants have very impressively shown how this can work in practice.”

Other apps developed during the week included the Rocket Tourist App, which uses Earth observation and crowdsourced data to locate the best spots for activities. The gQUERY App is an Earth observation-based geolocation search engine for decision-makers and the public. PEBLY is an easy-to-use app for tourists, which provides information on typical holiday activities such as sunbathing, surfing, snorkelling and swimming. SATVR enables dedicated industries such as construction companies and the mining industry to visualise ground deformation by combining Earth observation data and augmented reality. BIOME simplifies the process of research projects for scientists and governments by gathering in situ data and validating EO data in a better way.