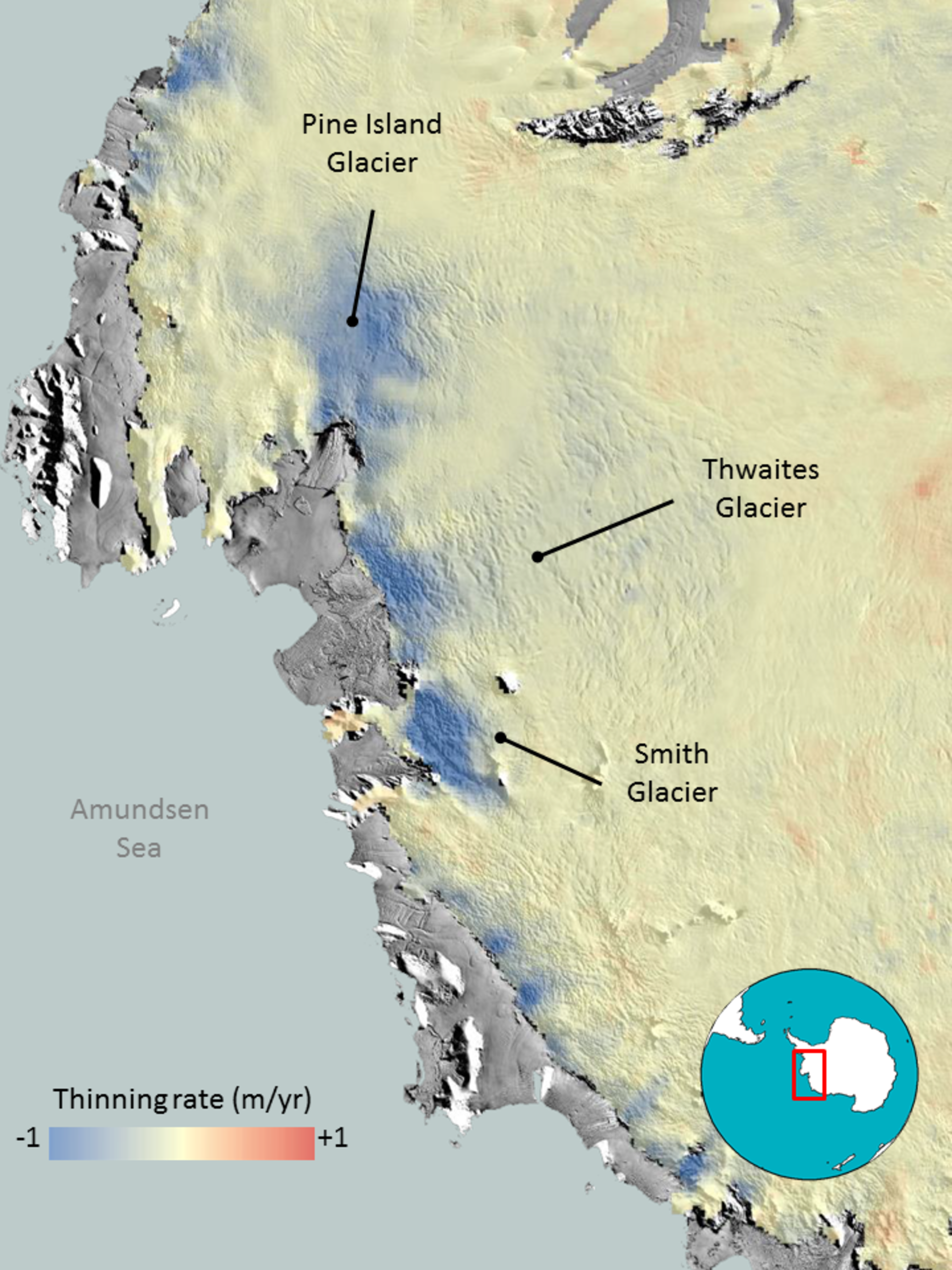 Three years of observations by ESA’s CryoSat satellite show that the West Antarctic Ice Sheet is losing over 150 cubic kilometres of ice each year – considerably more than when last surveyed.

The imbalance in West Antarctica continues to be dominated by ice losses from glaciers flowing into the Amundsen Sea.

“We find that ice thinning continues to be most pronounced along fast-flowing ice streams of this sector and their tributaries, with thinning rates of between 4–8 m per year near to the grounding lines – where the ice streams lift up off the land and begin to float out over the ocean – of the Pine Island, Thwaites and Smith Glaciers,” said Dr Malcolm McMillan from the University of Leeds, UK.

Melting of ice sheets that blanket Antarctica and Greenland is a major contributor to global sea-level rise.

An international team of polar scientists had recently concluded that West Antarctica caused global sea levels to rise by 0.28 mm each year between 2005 and 2010, based on observations from 10 different satellite missions. But the latest research from CryoSat suggests that the sea level contribution from this area is now 15% higher.

Launched in 2010, CryoSat carries a radar altimeter that can ‘see’ through clouds and in the dark, providing continuous measurements over areas like Antarctica that are prone to bad weather and long periods of darkness.

The radar can measure the surface height variation of ice in high resolution, allowing scientists to calculate its volume accurately.

Professor Andrew Shepherd from the University of Leeds, who led the West Antarctica study, said that part of the increase of ice loss could be due to faster thinning, but that part of it may also be down to CryoSat’s capacity to observe previously unseen terrain.

“Thanks to its novel instrument design and to its near-polar orbit, CryoSat allows us to survey coastal and high-latitude regions of Antarctica that were beyond the capability of previous altimeter missions, and it seems that these regions are crucial for determining the overall imbalance,” he said.

The findings from a team of UK researchers at the Natural Environment Research Council’s Centre for Polar Observation and Modelling were presented this week at the American Geophysical Union’s autumn meeting in San Francisco, California.

The meeting brings together more than 20 000 Earth and space scientists, educators and students to showcase their research. ESA is also presenting the latest scientific results from its Earth observation missions.

CryoSat has been providing a unique capacity to extend the record of Antarctic altimeter observations, following on from the 20-year record acquired by altimeters on the ERS-1, ERS-2 and Envisat satellites.

Satellites being developed for Europe’s Copernicus programme will continue to monitor changes in the polar ice sheets during the coming decades with radar sensors on the Sentinel-1 and Sentinel-3 satellite series, scheduled to be launched from 2014 onwards.