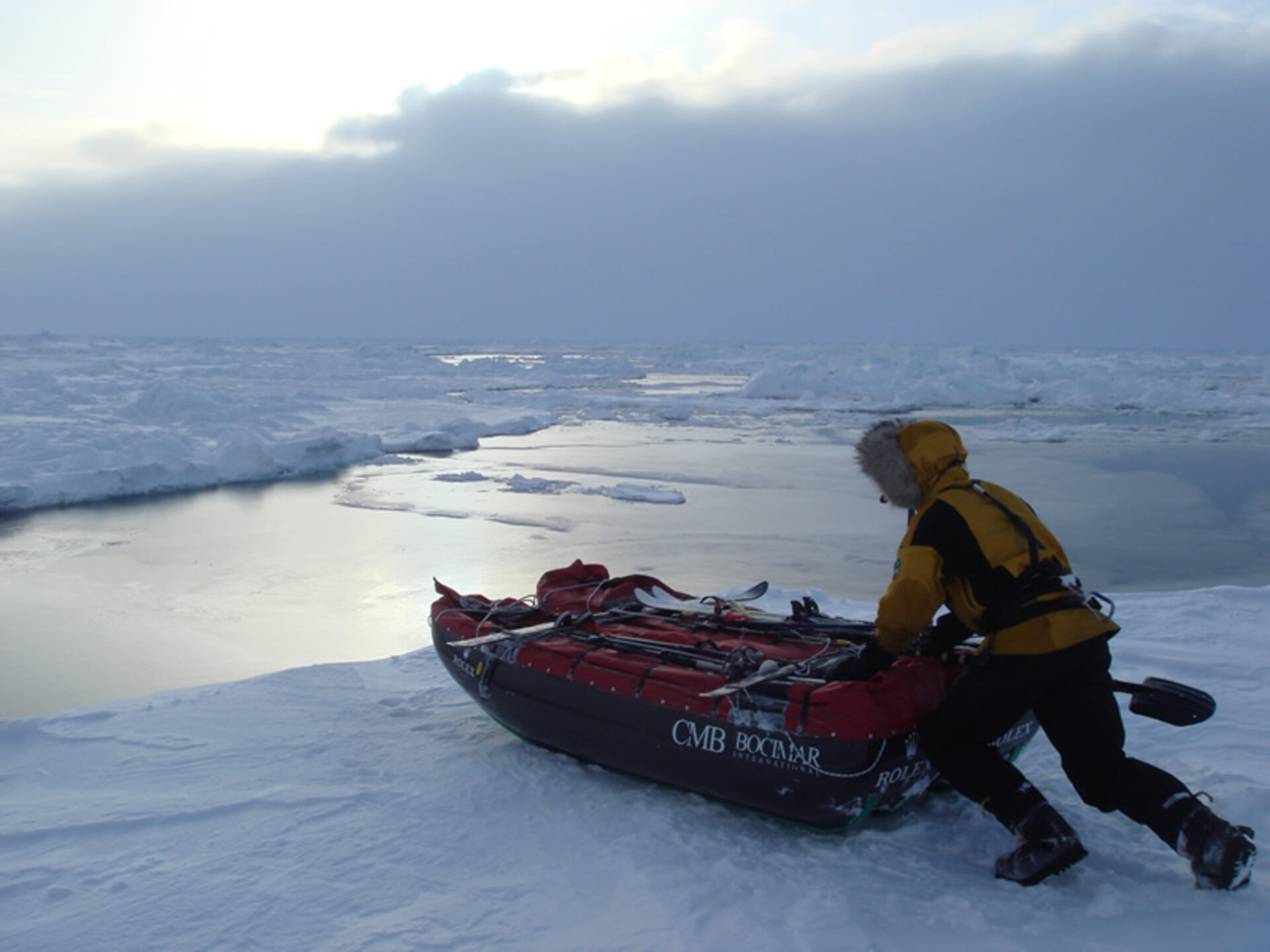 To coincide with the launch of the International Polar Year (IPY) 2007-2008, Alain Hubert and fellow explorer Dixie Dansercoer ventured out onto the sea-ice to embark upon a trek from Siberia to northern Greenland via the North Pole – a route never before attempted. Throughout the expedition, the polar explorers had to endure temperatures down to -40ºC, encounters with polar bears and the incredible physical demand of having to drag heavy sledges across pressure ridges of sea-ice piled up several metres high as well as cross open water where the ice had fractured. Nevertheless, Alain and Dixie took time out every 50 km to make snow-depth measurements for the CryoSat mission.

"It wasn't really difficult to take these measurements for CryoSat," said Alain, "It became part of our routine. The difficult part of the expedition was putting one foot in front of the other when the ice is breaking up around you. As co-founder of the International Polar Foundation, a scientist as well as a seasoned explorer - I aim to form a kind of 'bridge' between science and society. Observing the changes that are occurring in the fragile Arctic environment will help lead to a better understanding of the effects of climate change, and ultimately the Earth system as a whole. CryoSat is an exciting mission that will help answer questions about the polar ice so we were very happy to contribute through our Arctic Arc expedition."

Since the Earth Explorer CryoSat mission, which is due for launch next year, is designed to measure tiny variations in the thickness of floating sea-ice and ice on land, understanding the effects that the overlying snow can have on the measurement of ice elevation is of huge importance. To this end, ESA has in place a dedicated validation programme that involves a number of field campaigns in the polar regions. Measurements collected on the ice and from the air are crucial to fully understand and characterise the geophysical uncertainties in the CryoSat products so that the data CryoSat delivers is interpreted as accurately as possible.

During a presentation held this week at ESA-ESTEC in the Netherlands Alain handed over the dataset to Richard Francis ESA's Project Manager for CryoSat, who commented that, "While snow-depth information holds the key to producing accurate maps of ice-thickness change over time, there are relatively few basic ground-measurements readily available. So when Alain offered to take measurements during his expedition, the CryoSat project was extremely grateful."

In turn, Alain and Dixie were also grateful for help provided by an existing ESA satellite. Under the ongoing ESA Project Polar View, which is delivering logistical support to IPY, they were able to rely on images from Envisat to guide them through some dangerous ice-break up. Alain explained, "As we approached the coast of northern Greenland, the sea ice in the Lincoln Sea began to break up chaotically - something we really weren't expecting. We realised there was no way we could take our planned route to reach land. Fortunately, however, we were guided by expedition router who relied on information provided by the Danish Technical University using data from ESA's Envisat satellite to help us circumnavigate the open waters and eventually reach land safely."

Malcolm Davidson ESA's CryoSat Validation Manager noted that, "ESA has now released the snow-depth data collected by the Arctic Arc expedition to the CryoSat Validation and Retrieval Team. The team has been quite eager to get the data and start the analysis. Ultimately we expect that – in conjunction with the core ESA-sponsored airborne campaigns and similar initiatives from other polar expeditions – the data will help us better measure ice-thickness changes over time from space with CryoSat-2."