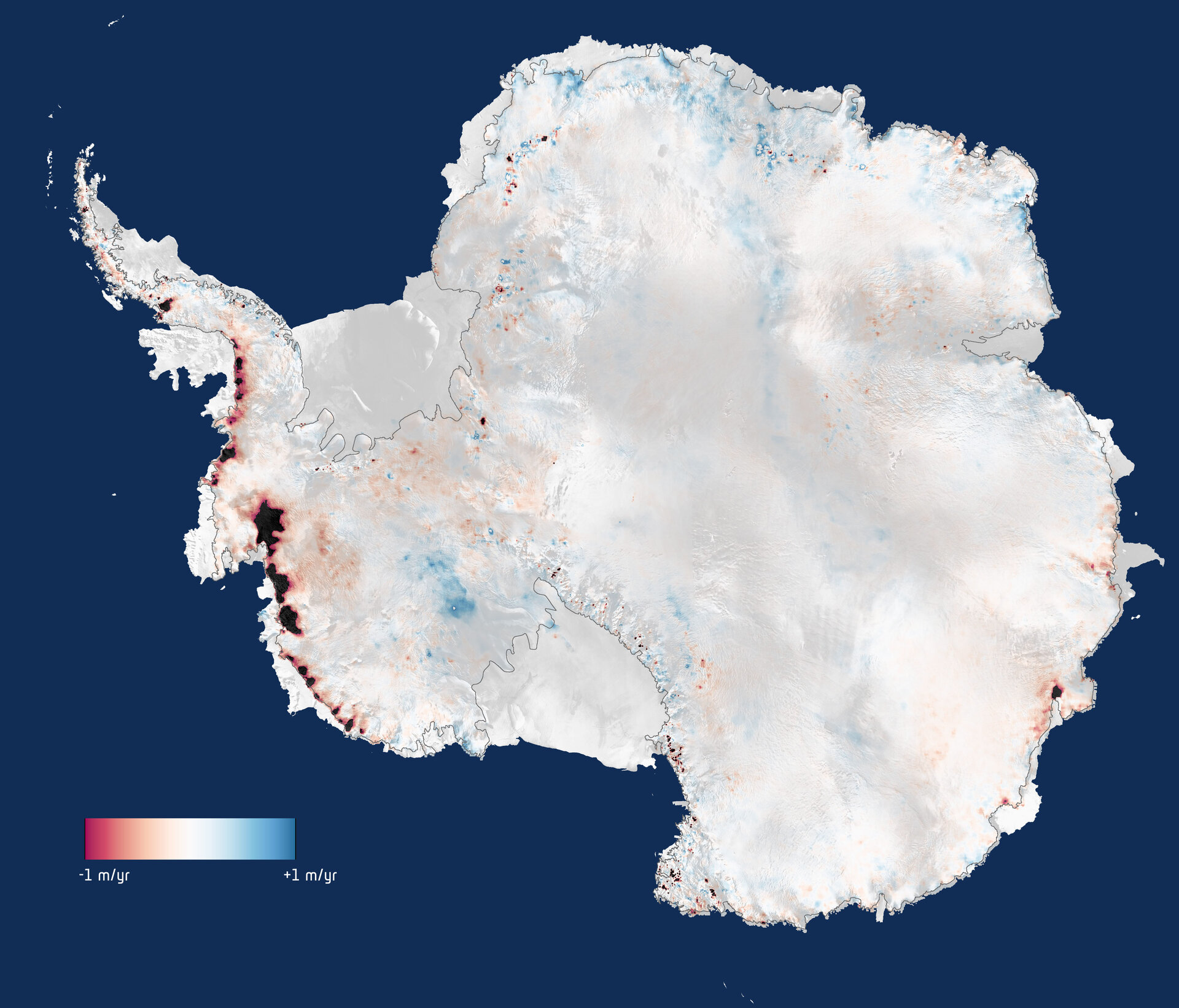 Three years of observations from ESA’s CryoSat satellite show that the Antarctic ice sheet is now losing 159 billion tonnes of ice each year – twice as much as when it was last surveyed.

The polar ice sheets are a major contributor to the rise in global sea levels, and these newly measured losses from Antarctica alone are enough to raise global sea levels by 0.45 mm each year.

These latest findings by a team of scientists from the UK’s Centre for Polar Observation and Modelling show that the pattern of imbalance continues to be dominated by glaciers thinning in the Amundsen Sea sector of West Antarctica.

Between 2010 and 2013, West Antarctica, East Antarctica and the Antarctic Peninsula lost 134, 3 and 23 billion tonnes of ice each year, respectively.

The average rate of ice thinning in West Antarctica has increased compared to previous measurements, and this area’s yearly loss is now one third more than measured over the five years before CryoSat’s launch.

Launched in 2010, CryoSat carries a radar altimeter that can measure the surface height variation of ice in fine detail, allowing scientists to record changes in its volume with unprecedented accuracy.

CryoSat surveys almost all – 96% – of the Antarctic continent, reaching to within 215 km of the South Pole. In addition, it has increased coverage over coastal regions, where today’s ice losses are concentrated.

“Thanks to its novel instrument design and to its near-polar orbit, CryoSat allows us to survey coastal and high-latitude regions of Antarctica that were beyond the capability of past altimeter missions, and it seems that these regions are crucial for determining the overall imbalance,” said Prof. Andrew Shepherd from the University of Leeds, UK, who led the study.

In particular, newly mapped areas by CryoSat in West Antarctica have now brought altimeter observations closer to estimates based on other approaches.

“We find that ice losses continue to be most pronounced along the fast-flowing ice streams of the Amundsen Sea sector, with thinning rates of 4-8 m per year near to the grounding lines – where the ice streams lift up off the land and begin to float out over the ocean – of the Pine Island, Thwaites and Smith Glaciers,” said Dr Malcolm McMillan from the University of Leeds, UK, and lead author of the study.

This area has long been identified as the most vulnerable to changes in climate. Recent assessments say its glaciers may have passed a point of irreversible retreat.

“Although we are fortunate to now have, in CryoSat, a routine capability to monitor the polar ice sheets, the increased thinning we have detected in West Antarctica is a worrying development,” said Prof. Shepherd.

“It adds concrete evidence that dramatic changes are under way in this part of our planet. The challenge is to use this evidence to test and improve the predictive skill of climate models.”

The findings were published in Geophysical Research Letters.

“We at ESA are extremely pleased to see CryoSat achieve yet another one of its primary mission objectives. It is a great testament to the hard work put in by the whole team, who have worked on the mission over the past 10 years, ” said Tommaso Parrinello, CryoSat Mission Manager.