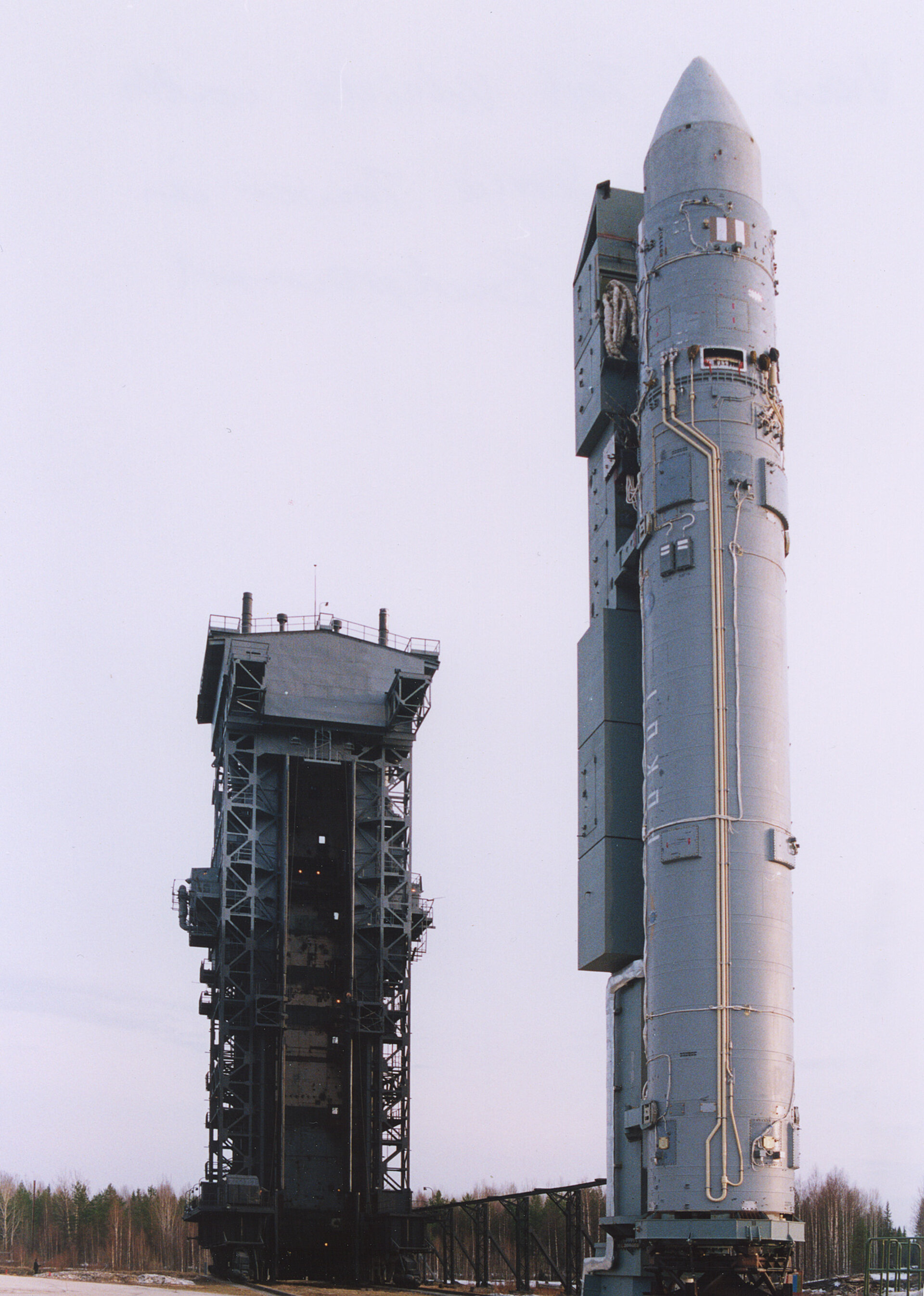 CryoSat's 8 October flight atop its Rockot launcher will be of historical significance in more ways than one. In a striking juxtaposition of new and old, the ESA ice satellite mated to a newly-finished Breeze-KM upper stage will be hauled most of the way to orbit by a vintage SS-19 two-stage rocket, first assembled two decades ago to serve as a weapon of nuclear war.

ESA satellites have flown from Russia's Plesetsk Cosmodrome before (as well as the Russian-operated Baikonur Cosmodrome in Kazakhstan) but this will be the first time one will be launched by Rockot – a design that consists of a Russian SS-19 two-stage intercontinental ballistic missile (ICBM) plus a Breeze-KM third stage to place the payload in its final orbit.

Codenamed 'Stiletto' by NATO, around 300 SS-19s were manufactured between the mid 1970s and 80s to serve as a major part of the old Soviet Union's nuclear arsenal. The liquid-fuelled ICBMs were deployed in locations across Russia and the Ukraine until the START arms control treaties made them redundant. It was in the early 1990s that a new use for them was found.

Today, Eurockot Launch Services is the Bremen–based company that markets and performs commercial Rockot services. The firm is a joint venture between EADS Space and Russia's Khrunichev rocket-makers and has been in existence for a decade.

"Disarmament talks and treaties between the West and the old Soviet Union reduced the strategic arms stock," explains Peter Freeborn of Eurockot. "Then came the bright idea, why not, instead of wrecking or chopping up these ICBMs, why not use at least part of them for peaceful reasons – namely for launching satellites into low-Earth orbit?

"To prove the concept that the SS-19 would be a good basic vehicle for launching satellites a trio of test flights took place in the early 1990s, although these used an earlier upper stage design, the Breeze-K. Then the Russians approached German industry and what was then Daimler Chrysler Aerospace (DASA for short – now part of EADS) formed a joint venture with Khrunichev to sell launch services." At the time there was a lot of market interest in commercial low-Earth orbit satellite constellations, and Khrunichev in 1998-9 designed the wider-diameter Breeze-KM upper stage to satisfy the requirements of Iridium LLC, the corporation that established a 66-satellite constellation for worldwide telephone services.

Eurockot's first commercial launch took place in May 2000; CryoSat will be the sixth such launch, while the Russian Federal government also recently flew its own Earth Observation satellite on a Rockot in August this year.

"A total of 157 SS-19s have flown to date, with no failures in the last 20 years," Freeborn adds. "Khrunichev have ten SS-19s in storage at their Moscow plant at any one time, drained of fuel and taken care of to prevent any degradation. That leaves around 150 still to be flown – we would have to be pretty successful to run out in the near future, with our business plan being to launch up to two per year. We have assurances from the Russian government that the Rockots will be good to fly until at least 2015, and envisage that could be prolonged to 2020 or later."

Meanwhile new Breeze-KM upper stages are built at Khrunichev's same plant, and shipped the 800 kilometres up to Plesetsk separately from the SS-19 and the satellite payload. The satellite is mated to the Breeze-KM at a purpose-built integration facility established by Eurockot at the Cosmodrome, then the combined satellite and upper stage is affixed to its waiting SS-19.

"The actual SS-19 hardware remains untouched," Freeborn explains. "It was originally designed to launch from a buried launch container silo and this is still the case, except the launch container is now above the ground and has the Breeze-KM on top.

"In addition because every satellite is different, the one-off sensor and integration devices needed to connect it with the Rockot is provided by Khrunichev, on the basis that the company who makes the launcher also make the interface for the satellite."

Rather than simply selling rockets the 15-strong "multi-cultural, multi-lingual" Eurockot team offer the entire frame of services needed in order for its global customer base to deliver payloads into space. For the actual launch itself Eurorockot subcontracts to Khrunichev who in turn subcontracts to the Russian Space Forces – all launches in the country being performed by military personnel.

ESA's new concept of Earth Explorer missions involves smaller spacecraft designed to address specific needs of the scientific community – in the instance of CryoSat to measure thickness trends in marine ice cover and land ice sheets. CryoSat weighs in around 700 kg, so Eurockot, with its launcher able to deploy payloads of up to 1950 kg in mass into low-Earth orbit, successfully bid for the flight contract.

After CryoSat, Eurockot will also be launching ESA's follow-up Earth Explorer missions GOCE in 2006 and SMOS in 2007, with ESA's technology demonstrator Proba-2 probably flying in 2008. The company is also competing for ESA launch contracts into the next decade, with additional launches set for Japanese and Korean customers.