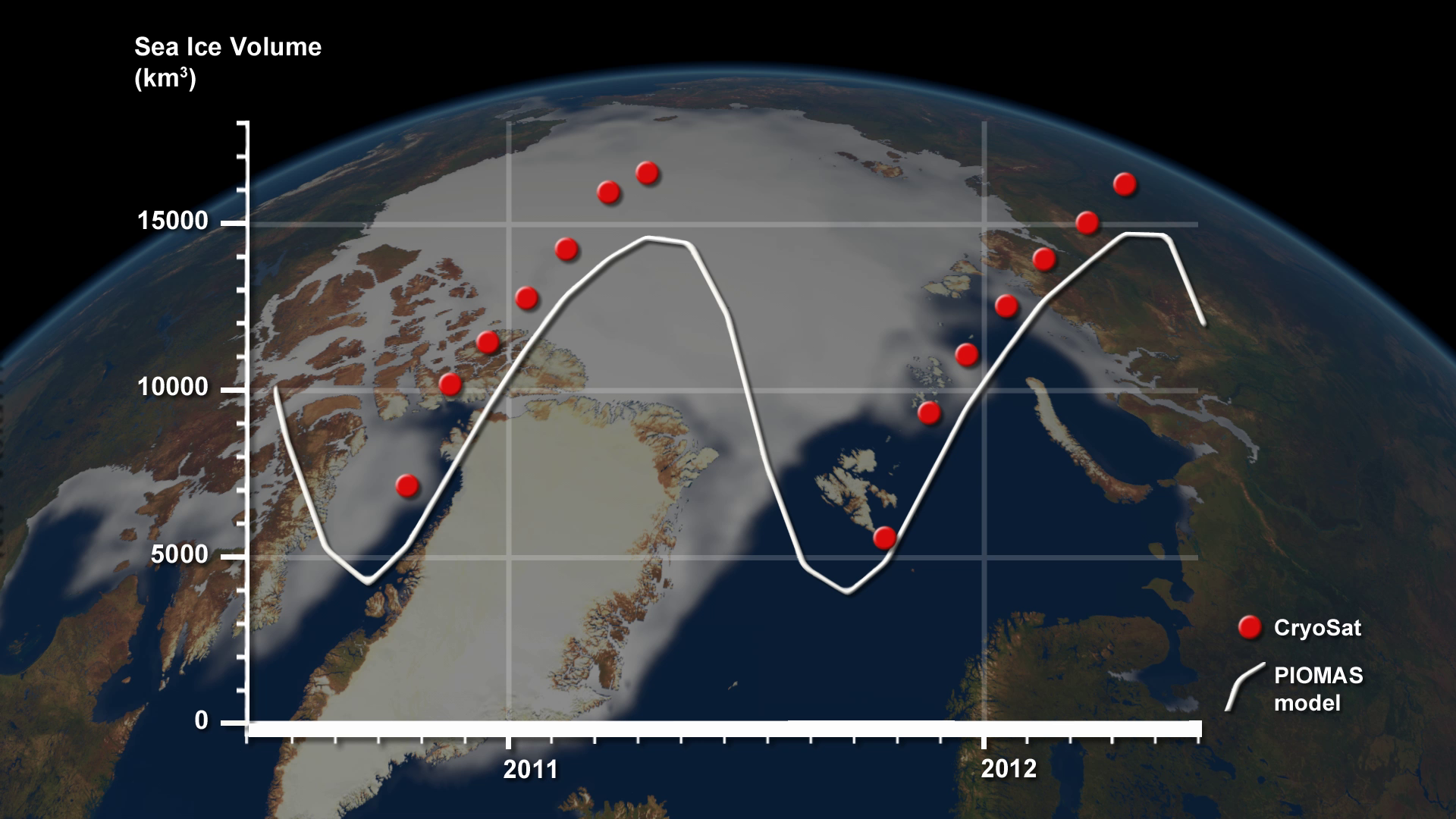 An international team of scientists using new measurements from ESA’s ice mission has discovered that the volume of Arctic sea ice has declined by 36% during autumn and 9% during winter between 2003 and 2012.

Satellite records show a constant downward trend in the area covered by Arctic sea ice during all seasons, but in particular in summer. The past six years have seen the lowest summer ice extent in three decades, reaching the lowest last September at about 3.61 million sq km.

A team of scientists led by University College London has now generated estimates of the sea-ice volume for the 2010–11 and 2011–12 winters over the Arctic basin using data from ESA’s CryoSat satellite.

This study has confirmed, for the first time, that the decline in sea ice coverage in the polar region has been accompanied by a substantial decline in ice volume.

The new CryoSat dataset shows the volume’s continuing decline observed from 2003 to 2008 by NASA’s ICESat satellite.

The team confirmed CryoSat estimates using independent ground and airborne measurements carried out by ESA and international scientists during the last two years in the polar region, as well as by comparing measurements from NASA’s Operation IceBridge.

“The data reveal that thick sea ice has disappeared from a region to the north of Greenland, the Canadian Archipelago and to the northeast of Svalbard,”  said Katharine Giles, co-author of the study ‘CryoSat-2 estimates of Arctic sea ice thickness and volume’, recently published online in Geophysical Research Letters.

“Other satellites have already shown drops in the area covered by Arctic sea ice as the climate has warmed, but CryoSat allows scientists to estimate the volume of sea ice – a much more accurate indicator of the changes taking place in the Arctic,” added Tommaso Parrinello, CryoSat Mission Manager.

To do this, CryoSat’s high-resolution radar altimeter sends pulses of microwave energy down towards the ice.

The energy bounces off both the top sections of ice and the water in the cracks between. The difference in height between these two surfaces allows scientists to calculate the ‘freeboard’ – the height of ice above the water – and, as a result, volume of the ice cover.

While the researchers say two years of CryoSat data aren’t indicative of a long-term change, they speculate that the lower ice thickness and volume in the winter of 2012, compared to the winter of 2011, may have contributed to the record minimum ice extent during the 2012 autumn.

The findings are the result of an international collaboration between teams from University College London (UCL), ESA, the Jet Propulsion Laboratory, the University of Washington, York University, Alfred Wegener Institute for Polar and Marine Research, Woods Hole Oceanographic Institution, Morgan State University and the University of Maryland

The lead author of this study was Professor Seymour Laxon, who passed away in early January.

Prof. Laxon was the Director of the Centre for Polar Observation and Modelling at UCL and a Principal Scientist for several ESA missions. He was part of the UCL team that proposed CryoSat to ESA in 1999, and was a key figure during the development and operational phases of the mission.

This was his first eagerly anticipated published work on CryoSat-derived sea ice record.