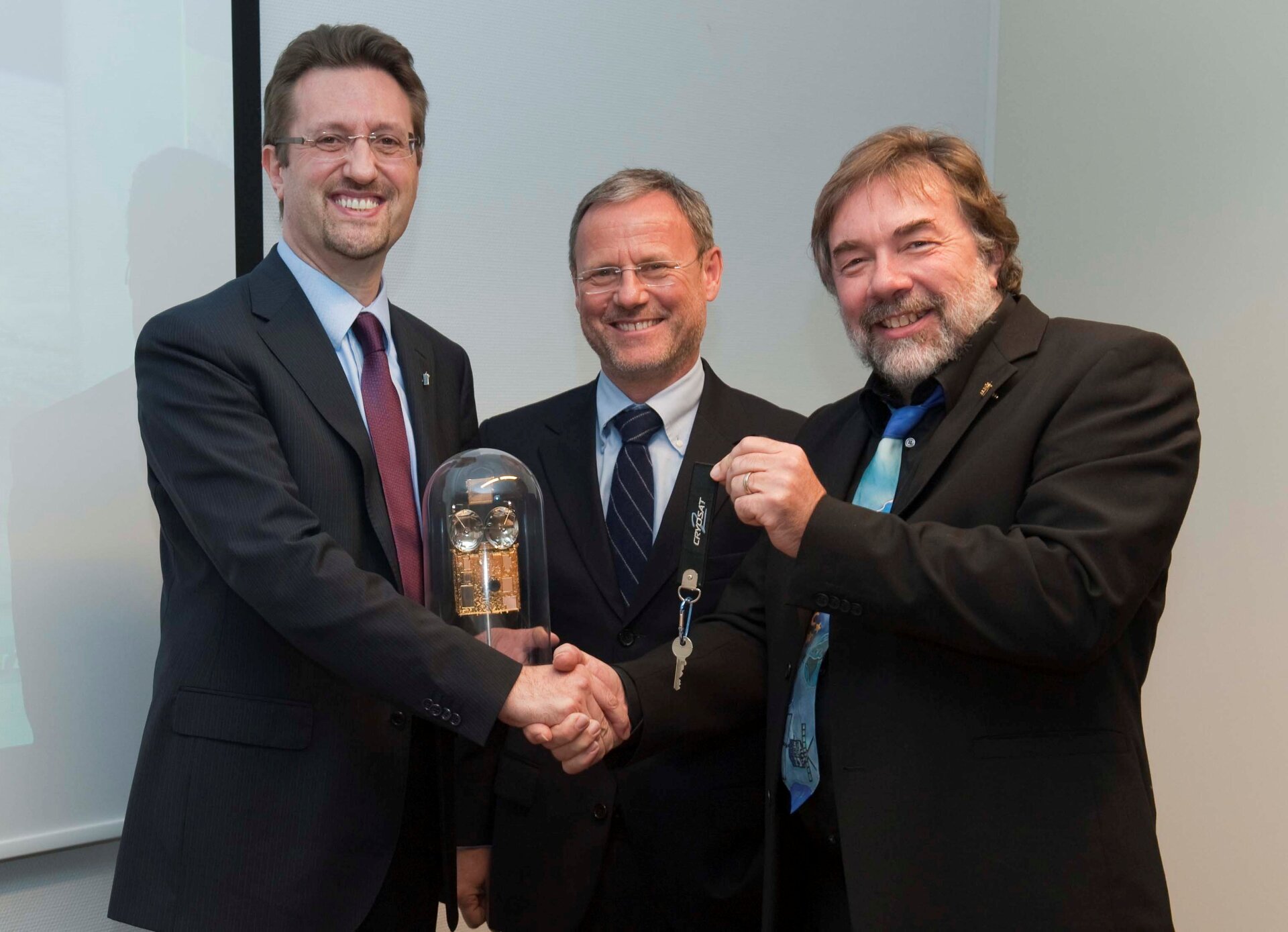 With the commissioning of ESA's CryoSat now complete, the mission has been officially transferred to the operations team. This milestone marks the beginning of the satellite’s operational life delivering ice-thickness data to understand the impact of climate change on the polar environment.

The handover ceremony took place on 19 November at ESA's European Space Research and Technology Centre (ESTEC) in the Netherlands, where the responsibility for the mission passed from CryoSat-2's Project Manager, Richard Francis, to the Mission Manager, Tommaso Parrinello.

Richard Francis had held the mission's reins since the decision was taken to rebuild CryoSat in 2006 following the loss of the original satellite during launch. However, his experience with the mission goes right back to 1999, when CryoSat was selected as an Earth Explorer mission and he worked as the System Manager.

Dr Francis said, "The commissioning phase has proved what a high quality system we have in CryoSat. This is a tribute to the team. Handing over to Tommaso to begin its operational life is an important milestone and achievement.

"Although tinged with sadness for me, as it marks the end of a formal involvement with this wonderful project, Tommaso inherits a superb mission and I am confident he will make the most of it."

Launched in April, the mission has recently completed commissioning – an important phase that ensures the satellite, instruments, data retrieval and data processing procedures are in optimal working order.

Now that this period is over, the mission has entered its exploitation phase and will start delivering vital data on ice thickness to the scientific community.

Tommaso Parrinello now holds the 'keys' to the mission and takes charge of the data exploitation, which is managed from ESRIN, ESA's Centre of Earth Observation in Frascati, Italy. His responsibility includes operations and maintenance, data processing and delivery.

The satellite will continue to be monitored, operated and controlled by the Flight Operations Segment at ESA's European Space Operations Centre (ESOC) in Darmstadt, Germany.

Speaking at the handover ceremony, Dr Parrinello said, "I am privileged to take over the responsibility of this important mission which will play a key role in understanding how our climate is changing.

"The commissioning phase has proven that both the satellite and the ground segment are in good shape. We are now looking forward to releasing the data to the scientific community next month and equally eager to receive the first results."

CryoSat is Europe's first mission dedicated to monitoring Earth's ice fields. The satellite carries a sophisticated radar altimeter that can measure the thickness of sea ice down to centimetres and also monitor changes in ice sheets, particularly around the edges where icebergs are calved from the vast ice sheets that cover Greenland and Antarctica.

Along with information on ice extent, these measurements on ice-thickness change will show how the volume of Earth's ice is changing and ultimately lead to a better understanding of the relationship between ice and climate change.

This milestone is not only achievement for the CryoSat mission, but also for ESA's programme for Earth observation. After the GOCE gravity mission and the SMOS water mission, CryoSat is the third Earth Explorer mission to begin operational life in orbit.

Looking to the future, a host of missions, including the Swarm magnetic field Earth Explorer and the family of Sentinel satellites for the Global Monitoring for Environment and Security programme are in various stages of development and will be launched over the next few years.

These satellite missions will significantly contribute to advancing our understanding of how Earth works as a system and provide much-needed information to assess how climate change is affecting our environment.