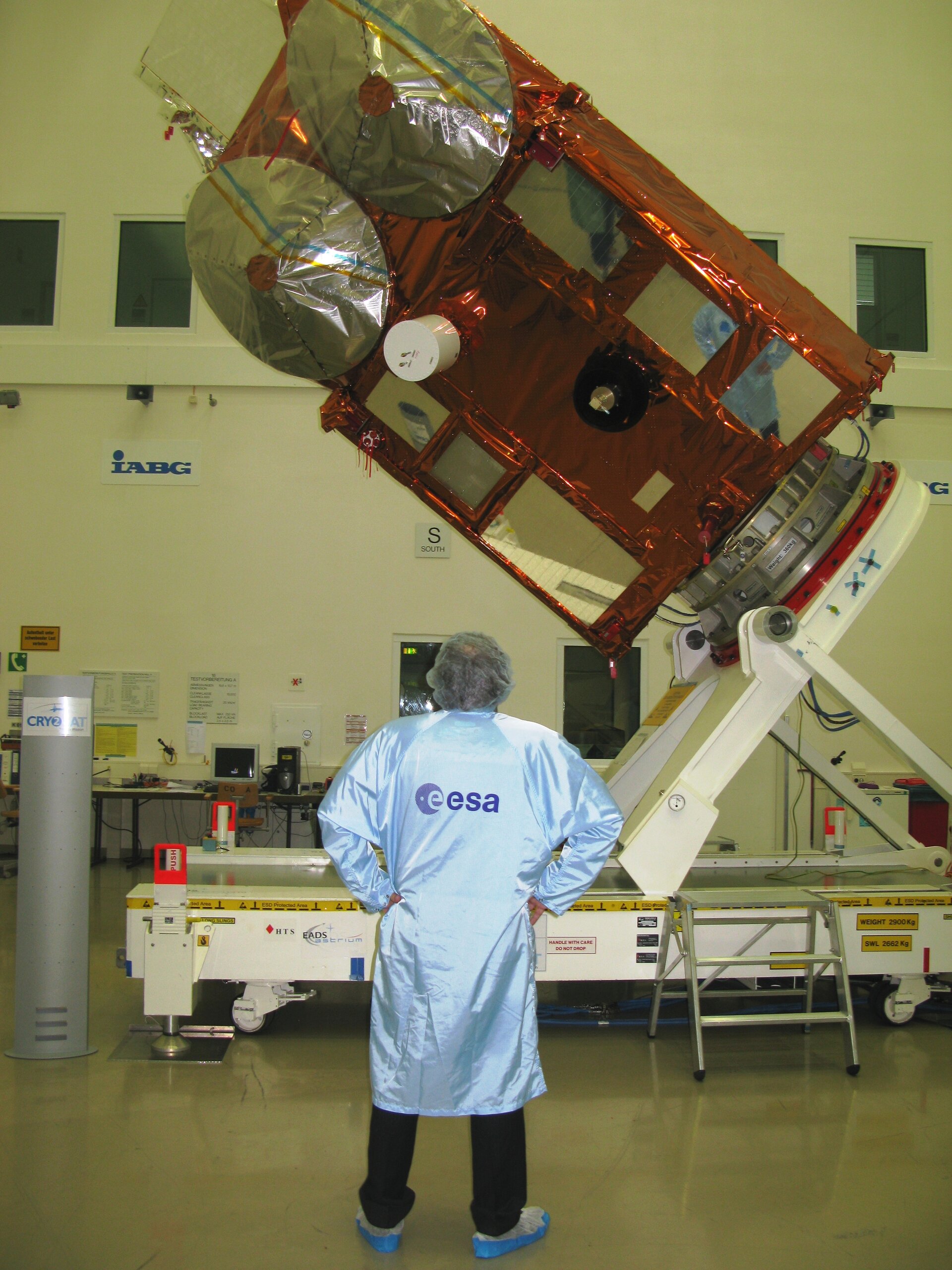 As members of the media visit IABG's spacecraft test centre in Germany to learn more about ESA's CryoSat mission and view the satellite, a new target launch date of 28 February 2010 has been announced.

The slip, from the planned launch date of December this year, is due to the limited availability of facilities at the Baikonur launch site in Kazakhstan, which is particularly busy at the moment.

Richard Francis, ESA’s Project Manager for CryoSat-2, commented that, “Naturally we are disappointed at this further delay. The satellite has already spent over six months in storage waiting for a launch opportunity. We restarted test activities in April hoping to have a clear run, but unfortunately we will now have to put the satellite back into its container for another few months. Now we’re replanning to make sure that the whole team is fully trained and at peak performance on the day. After the disappointment of losing the original CryoSat, before we even had the chance to contact it, we are eagerly awaiting this launch. We just have to wait longer.”

CryoSat-2 will be the third of ESA’s Earth Explorer satellites in orbit, following on from the GOCE gravity mission in March, and the SMOS water mission, which is being shipped to the Plesetsk Cosmodrome in Russia this week for launch on 2 November.

Developed in direct response to the needs of the scientific community, Earth Explorer missions form the science and research element of ESA’s Earth Observation Programme. Their main aim is to improve our understanding of how the Earth system works and the effect that human activity is having on natural Earth processes, while demonstrating breakthrough technology in observation techniques.

As the effects of climate change are becoming apparent in polar regions, it is increasingly important to understand exactly how Earth’s ice fields are changing. For some years, satellites such as Envisat have been mapping the extent of ice cover. However, in order to understand how climate change is affecting these sensitive regions, there is an urgent need to determine how the thickness of the ice is changing.

Volker Liebig, ESA’s Director for Earth Observation Programmes commented that, “Ice thickness and mass monitoring is crucial for assessing climate change. CryoSat will be our next Earth Explorer mission in space and I am proud that it took only four months for ESA and its Member States to agree on rebuilding ESA’s ice mission after the loss of the original satellite in 2005.”

Over its lifetime of at least three years, the CryoSat mission will deliver the data that scientists need to determine exactly how the thickness of the huge ice sheets on land and the ice floating in the oceans is changing. Being able to detect changes in these two different types of ice sets the CryoSat mission apart – ice on land can up to 5 km thick and ice floating in the sea just up to a couple of metres thick.

The satellite carries the first all-weather microwave radar altimeter optimised for detecting changes in the elevation of both types of ice. The core instrument is called SIRAL, short for SAR Interferometric Radar Altimeter it has two radar antennas and exploits synthetic aperture processing.

The media are currently enjoying a private viewing of the CryoSat-2 satellite in the cleanroom at IABG’s test centre in Ottobrunn, Germany. It has recently completed a series of tests to demonstrate that the 720 kg satellite, built by Astrium GmbH, is ready for launching into orbit.

CryoSat-2 will soon be packed up in readiness for shipment to the Baikonur Cosmodrome in December, where it will be prepared for launch at the end of February.