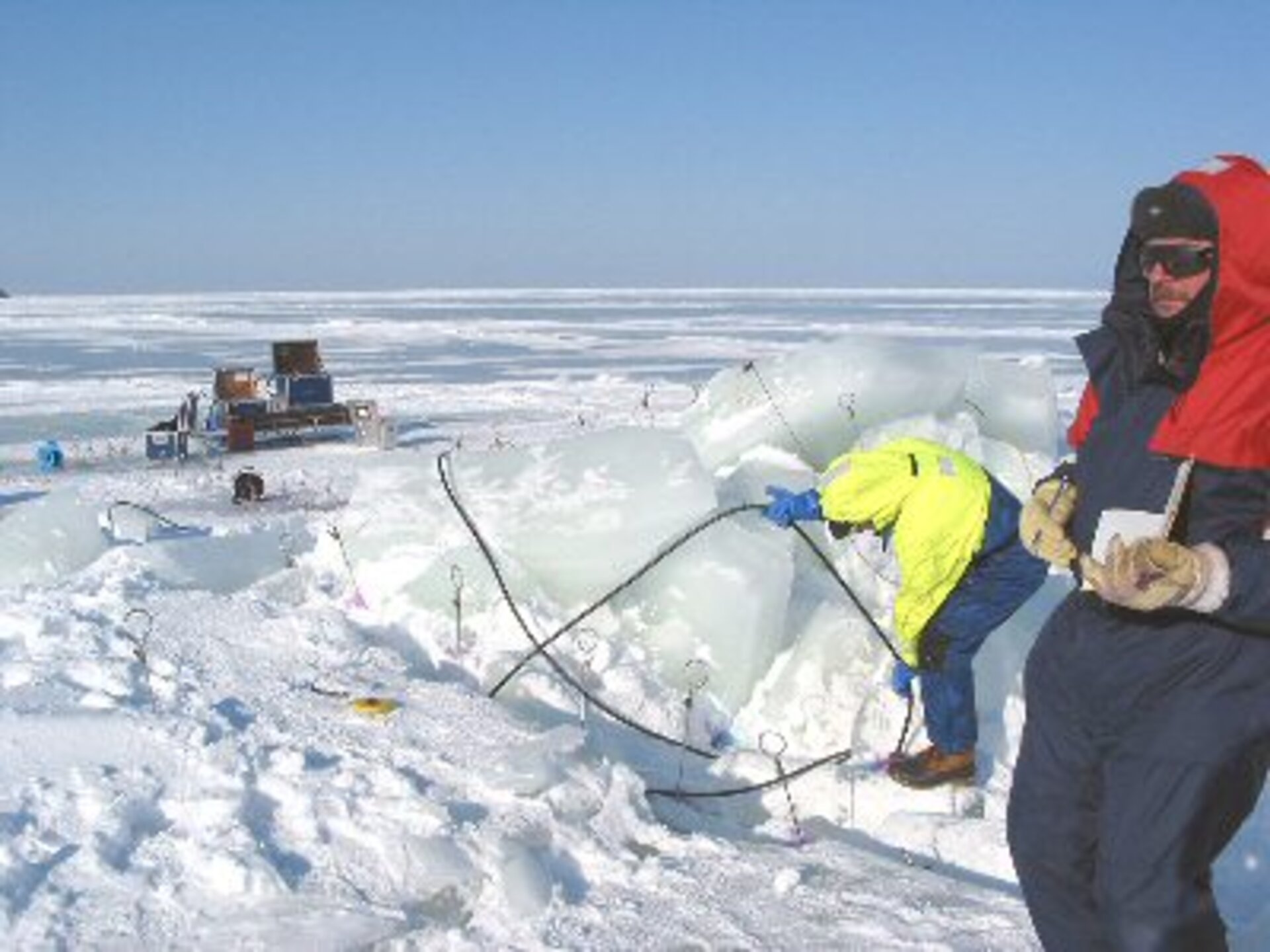 The northernmost part of the Baltic Sea, between Finland and Sweden, recently provided an ideal location for scientists to successfully address critical issues relating to sea ice validation before CryoSat is launched in September.

Unlike last year's CryoSat Validation Experiments (CryoVEx 2004), which focussed on land ice and took place in Greenland and the Canadian Arctic, the recent validation activities in the Baltic scrutinised issues relating to sea ice. The experiment examined the possible sources of error that could arise in the sea-ice thickness maps that will be generated using data from ESA's ice mission CryoSat.

Errors can arise, for example, where a snow layer is present on top of the sea ice. The weight of the snow tends to push the ice floes lower into the water, so that CryoSat, which translates the height of the ice surface above the waterline into ice thickness data, would underestimate the true thickness of the ice. Validation campaigns, thus, form a critical component of the whole mission; they provide the only means to reach a comprehensive assessment of how accurate CryoSat-derived ice thickness maps are.

Contributing to this aspect of the mission, an intensive two-week validation campaign was successfully carried out during March in the frozen Bay of Bothnia, which lies in the northernmost arm of the Baltic Sea. The campaign involved scientists from a number of institutes, namely, the Finnish Institute of Marine Research (FIMR), the Alfred Wegner Institute (AWI) from Germany, the Helsinki University of Technology (HUT), the Scottish Association of Marine Research (SAMS) and the Swedish Institute of Meteorology and Hydrology (SMHI). Ground and helicopter measurements were performed from the research vessel Aranda. The CryoSat validation activities were co-funded by ESA together with the National Technology Agency of Finland (TEKES) and other national and European sources.

In this coordinated effort, valuable information on sea ice properties and CryoSat validation measurements were collected from the surface of the ice, and from the air using the AWI Dornier 228 and HUT SC7 Skyvan aircrafts. From the air, 1600 kilometres of data were collected over the Bay of Bothnia and from several altitudes along a calibration line that was established close to the island of Hailuoto. The calibration line covered ice of varying thickness, from as little as 19 centimetres to as much as 20 metres and also included ice featuring different topography, from the smooth and level to very rough ridged forms. In addition, a helicopter suspending an electromagnetic sensor known as EM-bird, took many kilometres worth of ice thickness measurements underlying the airborne flight path. This will be compared with ice thickness data derived using the radar altimeter on board the aircraft to determine overall accuracy.

The most arduous task was undoubtedly collecting the ground measurements at various points along the calibration line. Snow thickness and snow properties were measured and holes were drilled through the ice to measure the thickness.

"We were very fortunate in many respects," says Jari Haapala, research scientist from FIMR. "We managed to reach the targeted region with the Aranda research vessel, although breaking through the thickest ice proved impossible at times. Nevertheless, after three days of crashing through the ice we found an ice researcher's paradise. During the days we were taking measurements, cold sunny weather prevailed so that the logistics of the campaign and the equipment all worked without any difficulty – and we even had the chance to relax in the sauna every evening! We received real-time satellite data, which enabled us to design the optimal measurement paths. Because sea ice drifts as it floats in the sea, one of the most challenging tasks was to collect coincidence aircraft and helicopter measurements. We managed to perform these measurements during very clear calm weather conditions and expect to get 120 kilometres of coincidence data."

In addition to contributing to CryoSat validation of sea ice, the Bay of Bothnia provided the first occasion to test the ASIRAS airborne radar altimeter using a new Low Altimeter Mode (LAM) recently implemented by Radar Systemtechnik (RST). This new mode allows the plane to fly closer to the ground improving the quality of the laser and datasets.

"We are very pleased with the Bay of Bothnia campaign on two accounts," says Malcolm Davidson, ESA CryoSat Validation Manager. "Firstly, the data collected during the campaign will help us quantify, and eventually improve the accuracy of the CryoSat sea ice measurements, and secondly, this campaign saw the first successful flights with ASIRAS at low altitude. This is a critical issue for ESA, as ASIRAS is our validation workhorse – it will be used extensively at low altitudes during major large-scale campaigns in 2006. The lessons learned from the Bay of Bothnia campaign means that we are now much better prepared and confident for next year."

Now due for launch on 15 September, CryoSat will be the first Earth Explorer to be launched as part of ESA's Living Planet Programme. From an altitude of 720 kilometres it will be responsible for measuring small changes in the thickness of polar ice sheets and floating sea ice with the aim of determining whether or not the Earth's ice masses are melting due to a changing climate. The satellite is currently undergoing testing at IABG (Industrieanlagen Betriebsgesellschaft mbH) in Ottobrunn, Germany.