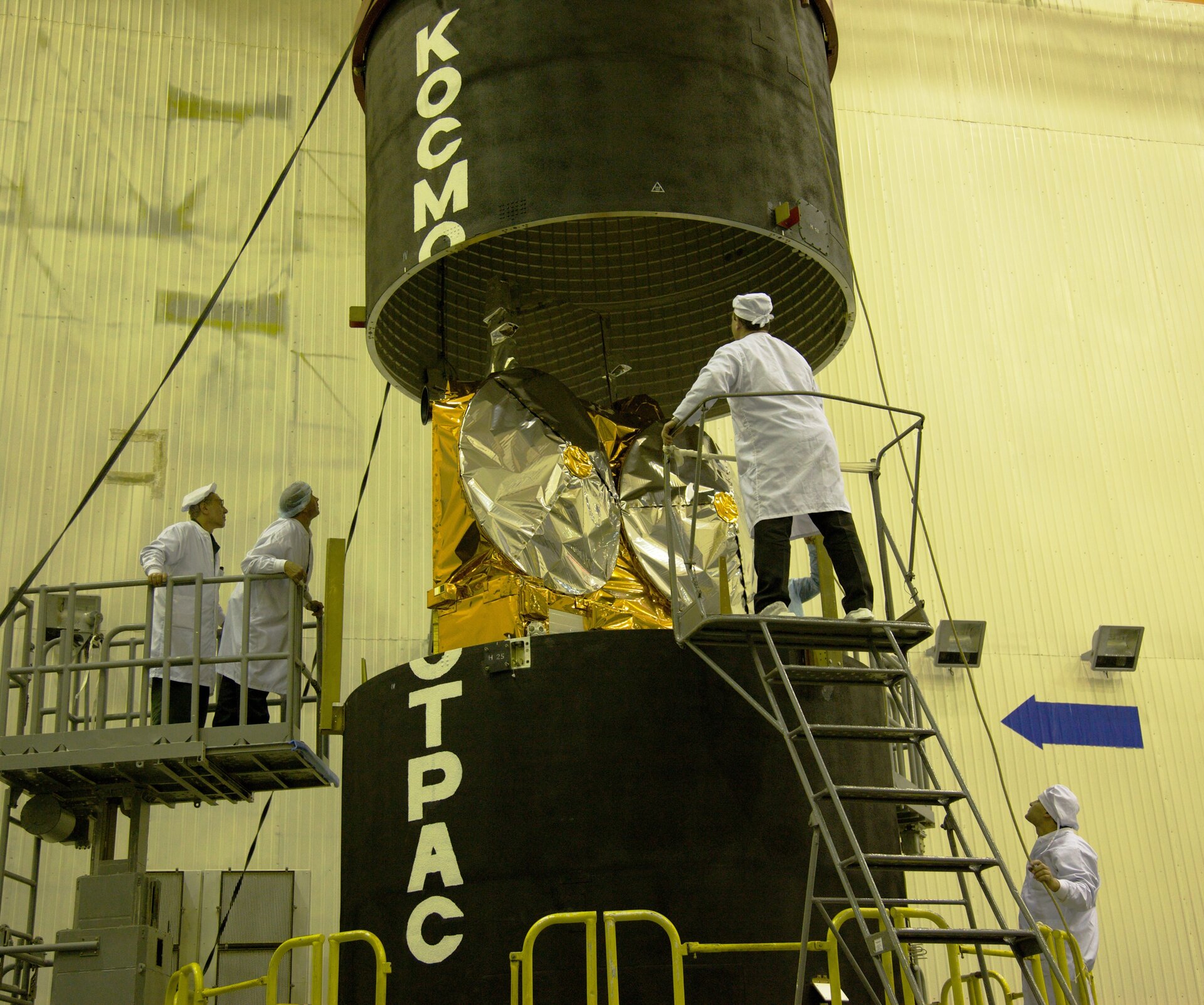 As preparations for the launch of ESA's ice mission on 25 February continue on schedule, an important milestone has just been reached with the team at the Baikonur Cosmodrome saying farewell to CryoSat-2 as it was encapsulated in the rocket's 'space head module'.

This milestone is the culmination of over three weeks of work testing the satellite at the launch site in Kazakhstan. Now, sealing CryoSat-2 from view, the protective fairing will not be released until just over 16 minutes after launch, when the satellite is injected into orbit.

The CryoSat mission is dedicated to precise monitoring of the variations in the thickness of ice. The mission will provide detailed data on changes in the thickness of both ice floating in the polar oceans and the vast ice sheets that cover Greenland and Antarctica. With the effects of a changing climate fast becoming apparent, particularly in the polar regions, this information is urgently needed to further our understanding of the complex interactions between ice and climate.

Since it was shipped to the Baikonur Cosmodrome in January, the CryoSat-2 satellite has been undergoing an intense series of tests to ensure it is ready for launch. Although this particular launch campaign has not all been plain sailing, the preparations remain on schedule and launch is still set for 25 February at 14:57 CET (13:57 UT).

One issue in the launch campaign came with the discovery that a piece of material in satellite's X-band science-data transmission antenna had broken off during transport. Through the ingenious use of a local surgeon and an endoscope, the problem was successfully resolved. Fortunately, the piece of ferrite that had broken off was much like the icing on a cake: the antenna works well without it, but improved the already good performance to a level comfortably exceeding the specifications, so it could be safely dispensed with.

Despite this hiccup, the campaign activities, which included further testing on the main instrument antenna – the Synthetic Aperture Radar (SAR)/Interferometric Radar Altimeter (SIRAL) and the Doppler Orbit and Radio Positioning Integration by Satellite (DORIS), which provides the satellite with accurate time and positioning data, have continued on schedule.

Once this phase of testing had been completed, permission was given to fuel the satellite and encapsulate it with the upper stage of the Dnepr rocket.

CryoSat-2 is now sealed with the upper stage – the 'space head module' – of the rocket and next week will make its way to the launch pad where it will be integrated onto the rest of the launcher in the silo.