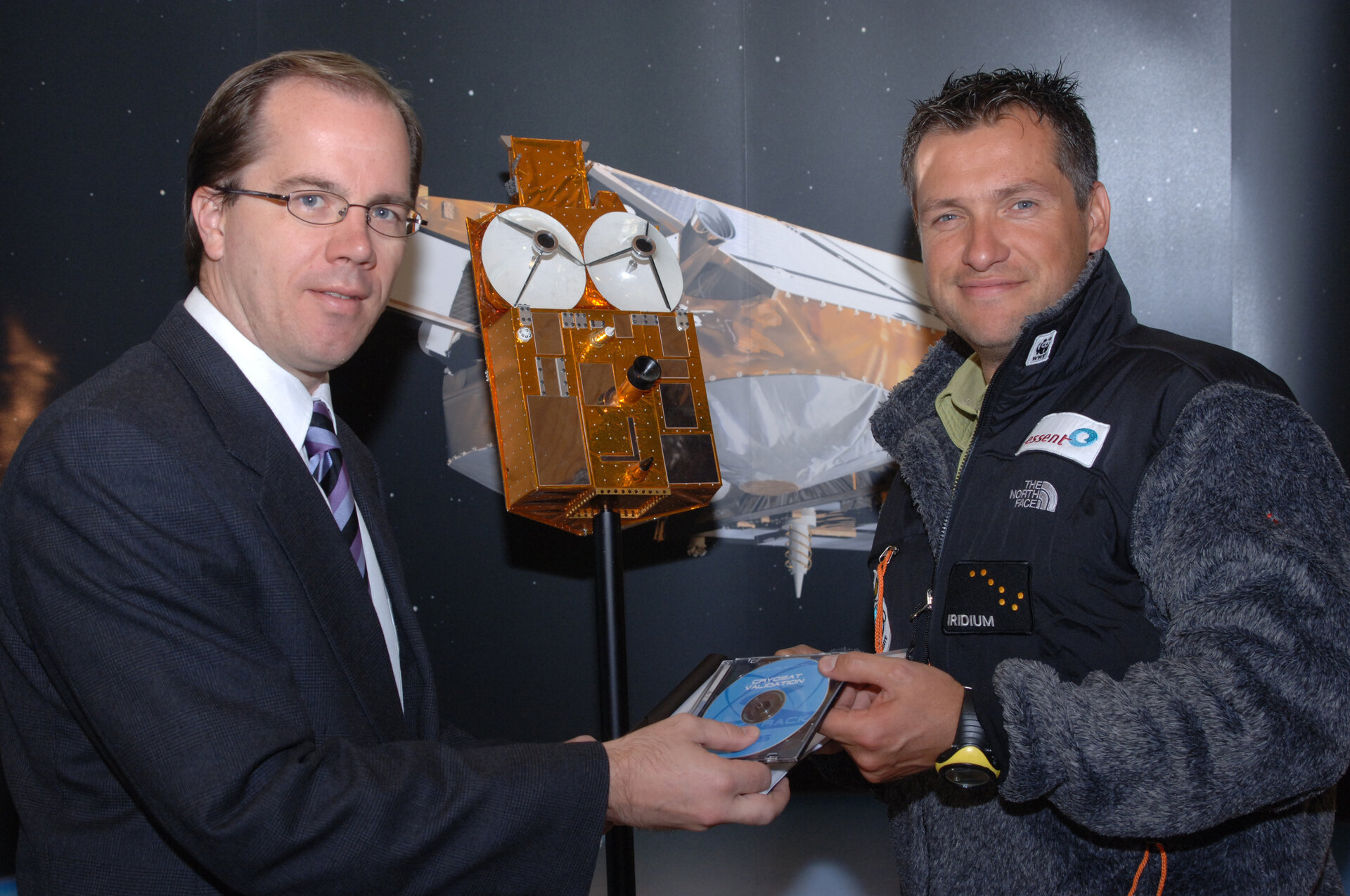 The CryoSat validation programme took another important step forward on Wednesday with the official handover of a unique set of data that had been collected by the intrepid Dutch Polar Explorer Marc Cornelissen on behalf of ESA during his recent expedition to the North Pole.

In March this year, Marc Cornelissen left Cape Arctichesky in northern Russia to lead the Pole Track 2005 expedition on a 1,000 km ski trek to the geographic North Pole. Along the way, the expedition team deployed mobile weather stations to transmit meteorological data, and collected a valuable set of snow depth measurements following a protocol that had been developed with ESA.

"While snow depth information holds the key to producing accurate maps of ice-thickness change over time with CryoSat, there are surprisingly few of these basic measurements readily available," says Malcolm Davidson, ESA CryoSat Validation Manager. "As a rule, people don't spontaneously spend weeks on end on the ice measuring this parameter. Marc Cornelissen's careful measurements of snow thickness during his expedition are thus very valuable indeed. The data will now be analysed by scientists participating in ESA's CryoSat calibration and validation programme."

In the long run, the data collected during the Pole Track expedition will contribute to the extensive validation program accompanying the CryoSat mission. The aim of this program is to collect independent measurements on the ground and from aircraft to fully understand and characterise the geophysical uncertainties in the CryoSat products. The data collected during the Pole Track expedition will be used, for instance, to estimate how much snow on top of sea ice affects the retrieval of sea-ice thickness information. Other large-scale campaigns have taken place in different locations across the Arctic over the last two years and have addressed different validation questions. Through the validation activities, CryoSat is expected to produce global maps of ice thickness change with unprecedented accuracy.

The planned 1,000 km expedition was unfortunately cut short when the Pole Track logistics provider was denied permission to build their base camp near the North Pole. Nevertheless, Marc and his fellow explorers Petter Nyquist from Norway and Doug Stoup from the USA did manage to collect around 300 km worth of snow thickness readings before abandoning the expedition.

However, the frustration of the logistical issues forcing the trek to be abandoned would seem less important compared to when Marc came face to face with a huge male polar bear on the verge of attack. Fortunately, Petter was able to shoot his gun to scare the bear away and Marc escaped with his life, albeit shaken by his close encounter with death. This experience certainly brings home the dangers that researchers and explores alike face when out in the field in the name of science and climate research. In an interview with Marc, he recounts some of his experiences and expresses his concern about climate change:

What were the biggest challenges you faced with this particular expedition?

Besides the collapse of our logistical support that forced us to abandon the mission, polar bears turned out to be a big challenge. A healthy population of persistent bears live near Cape Arctichesky. On three occasions we had to explain to a polar bear that it had to go.

Despite the expedition being cut short, how much data did you manage to collect for CryoSat validation purposes?

In the end we only did 300 km out of the 1000 km that was planned. We were out for three weeks, almost every day we made snow thickness readings. Every evening after pitching the tent, we picked a straight line through the terrain that evenly featured the elements specific to the location. The line would usually cover thin ice, pressure ridges and a vast patch of solid ice. Each line was 400 to 500 metres long and we made a snow thickness reading every few meters. We punched our snow probe through the snow cover until it touched ice. We would read out the thickness, shouting out the depth to the team member writing it down. The third man kept an eye out for polar bears and carried our gun.

How difficult was it to take the measurements?

Although the protocol for collecting snow thickness data is pretty straight forward, it was more demanding than I had anticipated. In the cold days of March with temperatures as low as -37° C it was a challenge to pitch the tent and tempting to go in straight away and light up the stove. Writing down the readings sometimes seemed a little sadomasochistic. Holding a pencil with your mittens while you fingers are completely numb is not a pleasant experience to say the least. But Petter and Doug, my teammates were very committed. We only skipped the procedure a couple times when frostbite started to set in.

CryoSat aims to determine rates of diminishing ice cover, but as a frequent visitor to the Arctic over the last 10 years, what changes to the ice have you personally noticed?

What I seem to have noticed is that there are more frequent but smaller leads (stretches of open water, sometimes covered with very fresh ice). This year we had a lot of 'water skies' around us, which is a haze of steam indicating open water. Despite the low temperatures and even light winds, full moon induced currents ripped everything open. Pressure ridges also occur very frequently but are by far not as extreme as I recall from my expedition in 1997. During any expedition we expect to swim across those small leads in our dry-suits. Sometimes the fresh leads worked in our favour serving as a highway when they were headed north.

How worried are you about receding ice cover?

We have seen a long period where prevailing winds and sea currents wipe away the sea ice and the ice itself seems to be thinning. It is a dangerous combination where natural variations in the regime of mechanical forces on the ice coincide with thermal forcing amplified by global warming. With steadily increasing emissions of greenhouse gasses we are dangerously interfering with a delicate system. And that’s the technocratic way of putting it. To me it is not a system – it is nature. And that is something we should not mess about with. So yes, I am worried.

How important a role do you think space missions such as CryoSat play in understanding a changing Earth?

I think it’s crucial. The Earth has been, and will always be changing. It's an intrinsic part of nature. But it is our responsibility to be in constant touch with our planet and take responsibility for how we interact with the Earth and make the appropriate decisions.

Do you have plans to lead any future expeditions to the polar regions and if so would you be interested in contributing again to the CryoSat validation effort?

I am currently focusing on the Climate Change College, which offers a select group of young adults the chance to contribute to worldwide and national climate change campaigns for the World Wide Fund for Nature. However, together with ESA's CryoSat Validation Manager Malcolm Davidson we are working out how I can further contribute to the CryoSat validation programme in Greenland. A realistic protocol will be developed in the coming months and part of the plan is to visit other scientists in the field working on the EGIG (Expédition Glaciologique Internationale Groenland) - Line, which runs across Greenland's central ice sheet. It was first traversed in 1959 and has been a site for various scientific surveys since.