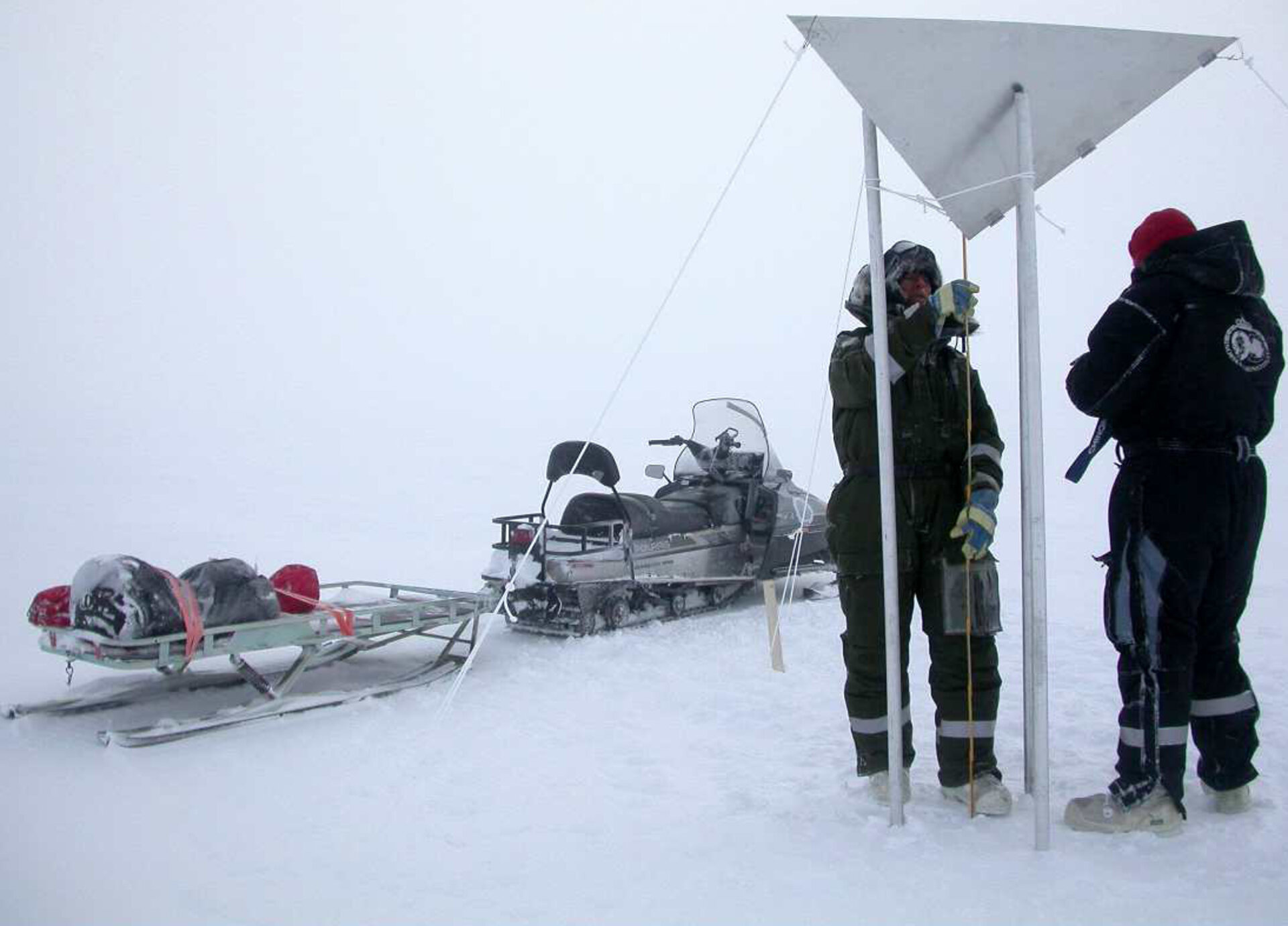 It is perhaps an unlikely combination – an international team of scientists stationed in Svalbard, Norway and two polar explorers crossing the North Pole on foot. Both teams, however, are currently part of a common effort to collect vital data on the ground and from the air in support of ESA's ice mission CryoSat-2.

The CryoSat-2 mission, due for launch in 2009, will provide highly accurate information on changing marine and land ice thicknesses over the entire north and south polar regions, and in doing so will help address key questions regarding the impact of climate change on the polar environment. The mission is a technical tour-de-force if you take a step back and consider that the satellite will be travelling at over 25,000 kilometres per hour at 717 kilometres above the surface of the Earth and yet still measure changes in the ice thickness down to a few centimetres per year using its sophisticated radar altimeter SIRAL. Given these objectives and the importance of accurate measurements in assessing environmental change, it is not surprising that ESA goes to great lengths to ensure that the data from CryoSat-2 will be as accurate as possible.

Enter the Arctic Arc Expedition, part of the International Polar Year. The expedition’s two Belgian explorers, Alain Hubert and Dixie Dansercoer, 'stepped' onto the sea ice off the coast of Siberia on the 1 March 2007 each pulling a 130-kg sledge holding supplies and equipment. Along the way these two intrepid explorers are contributing to the preparation of the CryoSat-2 mission by measuring snow depths at regular intervals. These data in turn will be used by scientists to assess how well snow conditions can be predicted using existing climate models as well as inputs to methods for improving the accuracy of CryoSat-2 maps of sea-ice thickness.

"We are making good progress," said Alain Hubert when contacted in his tent on the ice with his satellite phone a few days ago. "We are now only 160 km from the North Pole and taking snow-thickness measurements at regular intervals along the way. Sometimes conditions are very difficult because of the cold and wind. However, we feel the effort is worthwhile and we will keep going."

As Alain and Dixie trek across the North Pole, a parallel campaign by scientists from Germany, Norway and the UK is unfolding in the extreme northern archipelago of Svalbard, Norway. On Thursday12 April, a group of eight scientists were transported by helicopter to the remote Austfonna ice cap. As part of the CryoVex 2007 campaign, they will spend one month making measurements of snow and ice properties along long transects that criss-cross the ice sheet surface. Conditions on the ground are often difficult, with high winds and low temperatures. The result is that sometimes the instruments and equipment fail as the leader of the ground team, Jon Ove Hagen from the University of Oslo, pointed out.

"We are currently moving our team from the depot at the bottom of the Austfonna ice cap to the summit so that we can start our ground measurements and support the airborne acquisition," said Jon Ove Hagen when contacted on Monday 16 April. "Bad weather and a broken skidoo are simply things we need to work around as we start our measurement programme."

As the ground experiments are carried out, measurements are also being taken from the air by the Alfred Wegner Institute (AWI). The Dornier-228 aircraft carries the ASIRAS instrument, which is an airborne version of the radar altimeter instrument onboard CryoSat-2. By comparing the airborne data with ground measurements scientists will test and verify novel methods for retrieving ice-thickness change from the CryoSat-2 satellite mission ahead of the launch.

"The first flight with ASIRAS looks good," says Veit Helm from AWI. "As soon as the weather conditions are good and the ground teams are in place, we look forward to our scientific flights and getting our hands dirty processing and analysing the airborne radar altimeter data over Austfonna. One fascinating aspect of such work is that the campaign actually allows us to look into the future and see what the CryoSat-2 mission will see and measure when it is launched."

The airborne work will continue until 24 April and the ground teams will stay on the ice cap until the beginning of May. When the campaign draws to an end, the challenge will then be to analyse the large volumes of data in order to characterise and improve the CryoSat-2 measurements of changing ice surfaces. In is only through such painstaking work that the challenge of measuring ice thickness down to centimetre level from space can be achieved, and in turn lead to a better understanding of the impact that changing climate is having on the polar ice fields.