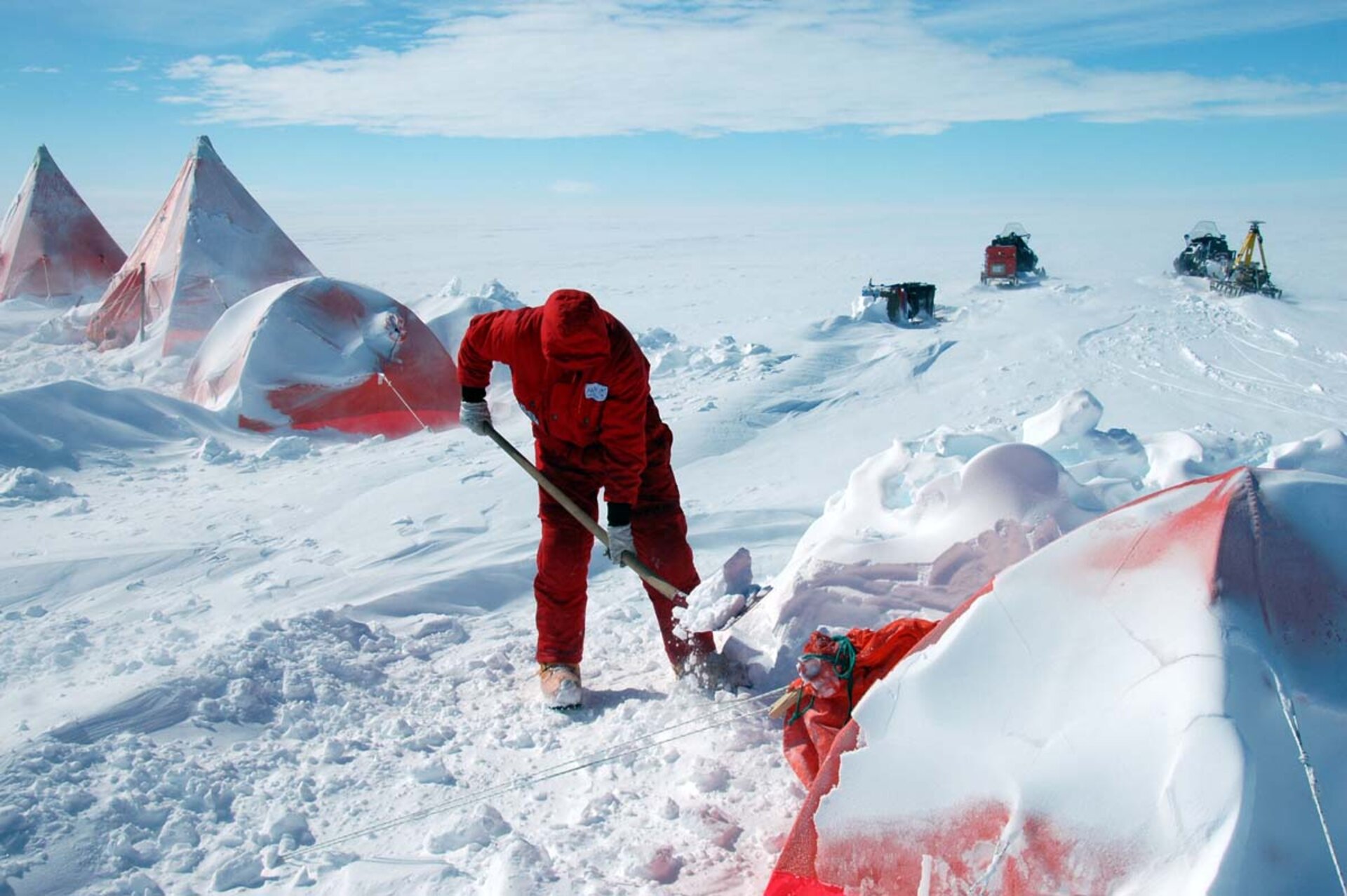 The idea of a white Christmas may seem magical for many of us, but spare a thought for a team of scientists forgoing the festive season to take part in a novel campaign being carried out in one of the most inhospitable regions on Earth to support ESA's ice mission CryoSat.

German scientists from the Technical University of Dresden and the Alfred Wegener Institute are spending up to four months venturing out onto the vast frozen reaches of what is known as the 'blue ice' region near the Russian Novo airbase in Dronning Maud Land in Antarctica. The aim is to take very accurate measurements of the surface topography, both from the air and on the ground to contribute to the validation programme for CryoSat-2.

With diminishing ice cover fast becoming a reality, ESA's CryoSat-2 mission has been designed to measure the exact rate of change in the thickness of both ice floating in the oceans and ice sheets on land. To measure the thickness of relatively thin sea ice as well as survey the surface of ice sheets that are kilometres thick requires specialised instrumentation and data processing methods. To achieve this, CryoSat-2, which will launch towards the end of 2009, carries an innovative radar altimeter called the Synthetic Aperture Interferometric Radar Altimeter-2 (SIRAL-2).

Unlike most other glaciers or ice caps in polar regions, the Antarctic blue ice region in the Schirmacher Oasis is unique in that it is characterised by a sheet of hard glistening polished ice, completely devoid of snow. It is this unusual icy surface with its lack of overlying snow that makes it particularly useful for determining the accuracy of the altimeter on board CryoSat.

"The blue ice region is a unique area for CryoSat calibration and validation," says Professor Reinhard Dietrich from the University of Dresden who is managing the project for the University. "Because the surface is essentially polished ice, the CryoSat radar signal from space will be reflected directly by the surface, without penetrating into the snow. This will give us a much-improved understanding of the accuracy of the CryoSat surface-height measurement, which is critical for making estimates of change in the total mass of ice caps through the altimeter measurements."

Currently, a party composed of two scientists from the Technical University of Dresden – Axel Ruelke and Franziska Kube – are out on the ice, painstakingly taking surface-height measurements using sophisticated GPS equipment towed by snowmobiles. This allows them to measure surface height variations down to centimetre accuracy. The team of two has been taking measurements since 10 November and hope to complete their first traverse across the region by Christmas. If all goes well, the team will finish the whole set of measurements by February 2009 and then head back to Germany via Cape Town, South Africa, to start with the detailed analysis of the precious data they collected. In addition to ESA, the German Space Agency DLR is also supporting the analysis.

In parallel to the efforts on the ground, the Alfred Wegner Institute (AWI) will be flying their POLAR5 aircraft across the blue ice site – starting just before Christmas and finishing before the New Year. From the plane, the AWI team will collect laser and radar height measurements along the very same tracks as the ground team. To do this they are using ESA's Airborne Synthetic Aperture and Interferometric Radar Altimeter System (ASIRAS), which simulates the measurements CryoSat.

By comparing the ground measurements with data from the airborne instruments the team will be have a better estimate of the accuracy of the measurements that the CryoSat altimeter will soon make from space.

"This campaign represents the very first ESA CryoSat campaign in the Antarctic," says Malcolm Davidson, ESA CryoSat Validation Manager. "The Antarctic 2008 campaign in the blue ice region will help us better understand how CryoSat radar signals interact with the ice surface and, ultimately, help prepare for the critical accuracy assessments required for the CryoSat mission once it is launched. I would like to thank the campaign team for their efforts and DLR for their financial support to the scientists."