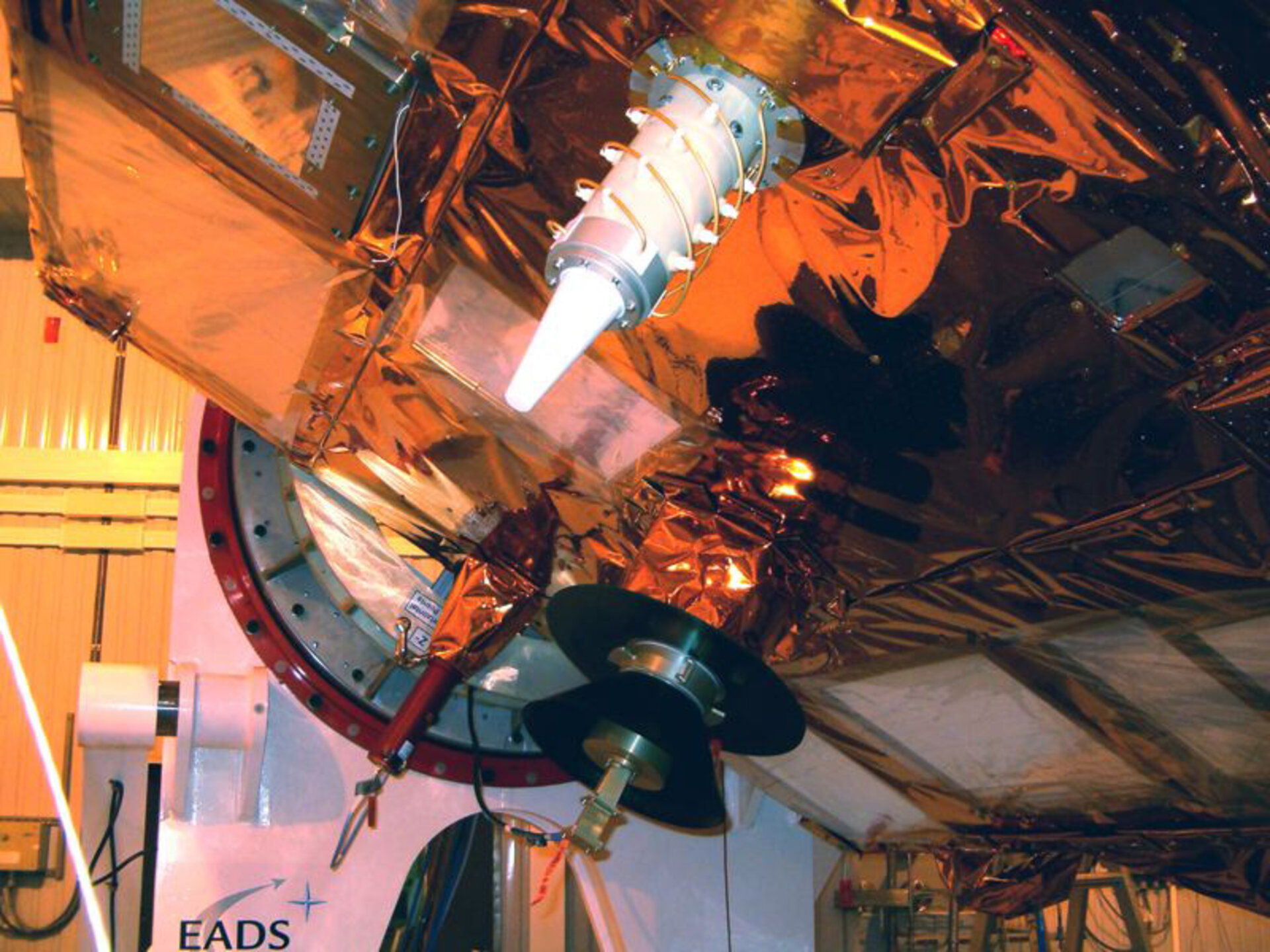 In the latest instalment of his CryoSat launch diary, ESA Launcher Interface Engineer Kurt Büchler recounts how the time has come to check the functioning of the satellite's main instrument, plus the beacon used to measure CryoSat's precise position in space.

This day is planned as a long one with two shifts. I am with the second one, which is leaving the hotel at 2 p.m. and is expected to leave the MIK at 11 p.m.

I therefore have a free morning and after breakfast decide to take a walk through Mirny on our permitted route. First along the lake, I can see that autumn is not far away. Also the weather has turned, it is now wet and cloudy. I see that quite a lot of locals are under the trees with buckets or plastic bags searching for mushrooms, most of them have considerable pickings. I return on the main road with a side turn, strolling through the little local market.

In the morning the first shift had the opportunity to watch the transport of the upper stage out of the general hall. The Breeze booster together with the integrated fairing in vertical position are pushed out of the hall by soldiers until an engine can take over. The whole ensemble is then brought to the launch tower, where a real fit check with the rocket will take place. It will come back to the MIK for CryoSat. No pictures of these operations are permitted.

We arrive in the middle of activities. Today tests with the DORIS instrument are foreseen. This instrument is a radio receiver which is essential to determine the position of CryoSat in orbit with high precision with the help of a network of ground beacons. This is a key element for the determination of the changing thickness of the ice cover on sea and land. A hardware problem with a PC simulating the beacon signal caused some delay, but the computer is exchanged with a redundant unit, and the test can continue.

In parallel the absorbing wall for radio frequency measurements with the antennas of SIRAL, planned for next week, is assembled in the airlock room, adjacent to the clean room. It consists of an aluminium framework and tiles made from special foam with a surface of pointy pyramids to minimise reflections. Tomorrow it is planned to roll the wall into the clean room and arrange both wall and spacecraft into the right position.

The DORIS measurements can be finished one hour ahead of schedule, so we are back in the hotel around 11 p.m.

Again this Saturday is a working day (as most likely will be all the following Saturdays), and it will be even a little bit longer for some of us in order to complete the daily schedule and close the activities for the second week.

Today is an important day for the preparation of tests next week, which will be the busiest week for us with regard to satellite activities. First thing in the morning is the uploading of new software: a new version for the Control and Data Management Unit - which is at the heart of the control and data handling of CryoSat -, and also an update for the Mass Memory and Formatting Unit, which is essential for storing all on-board data.

System tests will be performed in the next days to test the updates to the software for both of the units.

When I enter the clean room Reiner is already busy uploading the software. It was sent electronically from Friedrichshafen and is now transferred to the satellite via an ordinary laptop computer. If possible you always keep it simple.

In parallel the absorbing wall for the test of the SIRAL instrument is assembled. SIRAL is the principal instrument onboard CryoSat, it is an active radar instrument sending radar pulses and receiving the reflected signal, which allows the precise determination of the distance between satellite and surface of the earth. So the function of the whole signal chain is vital for the mission.

The functional check then is done by sending a pulse via one antenna towards a RF horn located in a hole of the wall just opposite, an RF cable directing the signal to the SIRAL ground electronics. There it is digitized and evaluated and an artificial - attenuated and delayed- response signal is produced that simulates the surface reflection of ocean, rough or smooth ice. This signal then is sent back to both antennas via the RF horns and finally detected in the instrument. So the loop is closed.

The absorbing wall has to suppress reflections which would impair the measurements and consists of tiles of a special foam rubber with very pointy pyramids. SIRAL's radiation pulses are at a wavelength and power which requires protection against health hazards. All this has been thoroughly discussed and agreed with the Russians.

When the wall is finished in the morning, it is rolled past the satellite towards the far end. The trolley has to be turned as well. This has to be done to make sure that radar radiation is directed to the outside of the building.

The general functioning of the two new software components is tested during in the course of the afternoon and the evening. This takes its time, and we only can leave the MIK at 20.30. Detailed tests will follow next week.

End of the second working week. Main result: we are on schedule.

Today is one of our few free days in the campaign, and it is dedicated to sports activities!

As we have quite a number of soccer aficionados in our team - some of them are even still active in their club at home, in the senior team of course... - we had asked a few days ago in our daily meeting with the Russian representatives whether it would be possible to play against a local amateur team.

This request had been considered positively and the colonel of the space forces was pleased to announce that a team of army officers was prepared for a match against the CryoSat team for Sunday, 11 a.m.

Army members! For heaven's sake! I never played soccer actively, but then in addition, the opponent team consisting of trained soldiers gives a strong reason for me to enthusiastically support our team from the side line.

Our team left the hotel already at 10 a.m., the match is to begin at 11. Obviously the local press had announced this event, because there are at least 50 viewers sitting on the tribune to enjoy the game.

The CryoSat team (the Russian word for it is the same as for commando) comes in blue project T-shirts, it looks very professional. Tactics is briefly discussed, a little warm-up done, then the army team arrives. Lead by a general who also plays!

The match to follow has the expected result. Clearly they know each other very well, and have a well trained tactics which is very successful. Our team did not win, and I am not going to give the result here! In any case, it was a match very much enjoyed by all parties. The local radio station has an interview with Cyrille, York and Klaus after the match, and I am sure we made friends in Mirny.