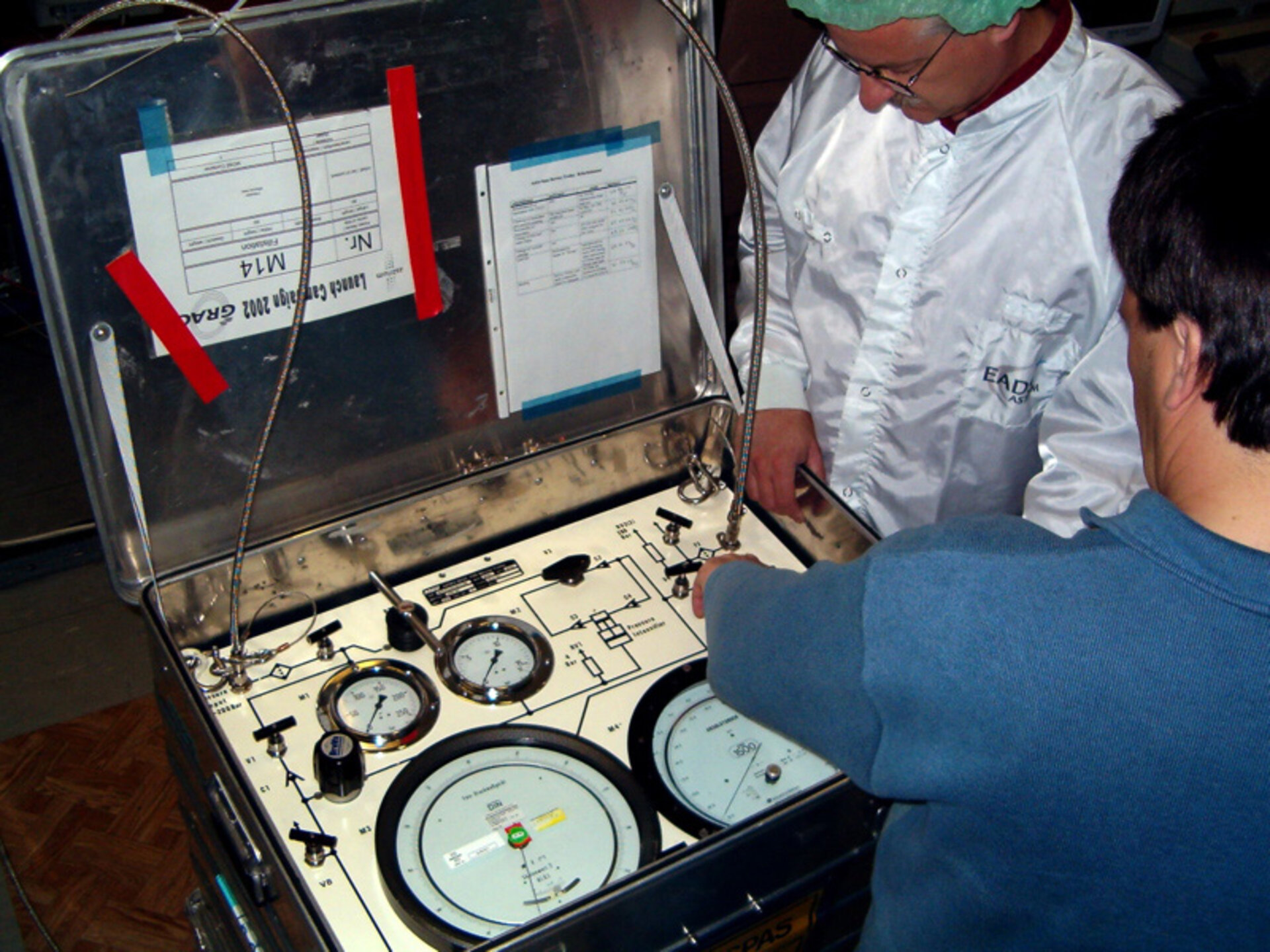 ESA Launcher Interface Engineer Kurt Büchler continues his diary account of CryoSat's final preparations to launch from Plesetsk Cosmodrome. The time has come for the satellite's propulsion system to be fuelled, a duty which officially counts as 'hazardous'.

I have some minor problems to get out of bed today, I don't know why...

Today we only have a very small team in the MIK. The main activity of the day is the filling of the propulsion system of CryoSat. The propellant is simply nitrogen, which is the main constituent of normal air: nearly four parts in five are nitrogen. (one part is oxygen, and the remaining rest is only a tiny share - however having strong effects on our planet's climate!).

Nitrogen is not poisonous, but might displace oxygen, if the gas bottles should happen to be leaky. This is a very remote danger, but in addition the tank has to be filled up to very high pressure (about a hundred times that of a car tyre). In the end the satellite will be actuated by thrusters that work like a child's balloon!

Mainly because of the high pressure the activities of today are classified as 'hazardous'. This means that during periods of filling activity nothing else can be done and nobody is permitted in the clean room. The filling has to be performed with intermittent waiting periods, because the gas warms up by pressurisation. It should not exceed a maximum temperature of 40 ºC, and we then have to wait for it to cool down.

During this time the satellite battery, which is the engineering model, can now be exchanged with the real flight model. This one actually was stored in the fridge all the time, nicely protected by a plastic film and desiccant. Wolfgang, Manfred and Fritz carry this out in half an hour.

Martin in the meantime watches in the monitor room on several screens what is going on in the clean room and the EGSE room, but there is nothing unusual to observe. We end in time, after having filled nearly 38 kg of nitrogen at 280 bar into the tank. When the temperature will have dropped by tomorrow morning, the pressure level will be at 265 bar.

Klaus Jäger is the next one celebrating his birthday in Mirny. Happy birthday, Klaus! Tomorrow is off!

In the morning it is beautiful outside, no cloud at all. There was some frost during the night. I am off duty today; Cyrille is gone with a few Astrium colleagues to the MIK to finalize the filling now that temperature equilibrium has been reached after one night. Cyrille tells me in the evening that finally 300 grams of nitrogen were added to the tank.

Also the engineering model of the laser retroreflector has been exchanged against the one for flight. The LRR is basically a set of mirrors arranged such that every light beam is reflected back into precisely the same direction it came from. It is a standard piece of equipment on many satellites and is used for distance measurements with the help of laser pulses sent from ground.

The departure of CryoSat from the clean room is planned for this week. Before this key event can take place, there is another crucial series of tests to be performed: the last of a sequence of so-called Software Verification Tests.

This last one – part five - comprises the ground operation and testing of CryoSat in Plesetsk, not via the operators on the console in the EGSE room adjacent to the satellite as during the past few days, but all the way from ESOC, in Darmstadt in Germany.

In the EGSE room there is a small rack with electronic units, connecting ESOC via telecommunication lines with the satellite. So in Darmstadt commands can be sent, subsystems on the satellite switched on or off, and the response of CryoSat can be monitored.

So for these tests the satellite control is handed over to Darmstadt, and they are going to test all sorts of subsystems and software routines: commands, data handling, attitude control, thermal control and so on. Very important of course is the testing of the SIRAL instrument interfaces. In the EGSE room not much can be seen, only a list of commands and their status passing swiftly by on the screens.

During the periods of instrument switch on nothing can done on the satellite. Wolfgang only can use the periods while it is off to adjust the gold and silver coloured thermal covers - called multi layer insulation - for flight and remove some non-flight items.

For the rest, the daily meeting routine continues - or rather increases, because the joint operations with the Russian launcher specialists are approaching. The Breeze upper stage will be filled tomorrow and come back in the early morning hours to wait for the mating with CryoSat. Now contrary to our satellite their liquid propellant - hydrazine and an oxidizer - is really poisonous and - naturally - explosive. So the next few days are rightly classified as hazardous. We will have to have gas masks at hand and know the emergency exits.

Apart from that all steps of the mating procedure have to be clear - where do we do it precisely, which cranes and equipment to be used etc. - and need to be agreed in a common schedule for the coming days.

Finally we expect the visit of a group of journalists at the end of this week. We have to prepare for that, as on one hand we must not interfere with the schedule, on the other of course we would like to have CryoSat presented as well as possible.

There is still the known issue with the MMFU software, tomorrow will bring some other tests.