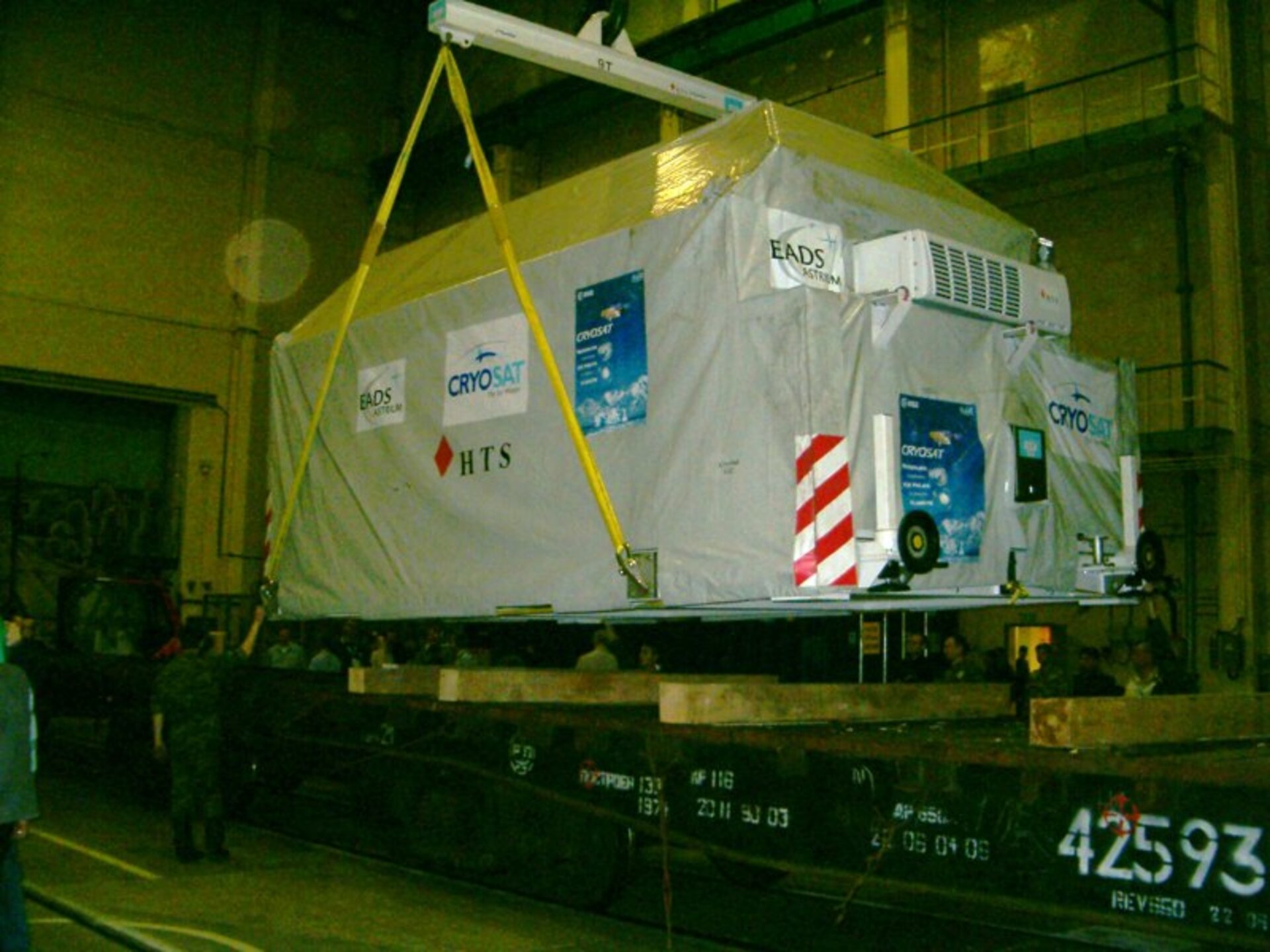 As CryoSat undergoes its final preparation for launch from Plesetsk Cosmodrome, ESA Launcher Interface Engineer Kurt Büchler is keeping a personal diary of events along with photos. In these excerpts he reviews the satellite's journey to Russia and its first days there.

While the satellite and some 60 tonnes of additional equipment is flown to Plesetsk Cosmodrome by Antonov 100, I have to start thinking about packing for my own trip there - I and the rest of the team will be there for more than six weeks.

The advanced launch team (with Cyrille Lusteau and Bill Simpson from ESA) left for Moscow on Friday morning. There they met Sergei Galitsky from ESA's Moscow Office, Friedrich Adler and Thomas Schuler from Astrium Friedrichshafen, Armin Seidler from our launch provider Eurockot and colleagues from Khrunichev. Together they continued the voyage to Plesetsk by train from Yaroslavskaya station in Moscow.

The task of the team is an important one: they have to make sure that all conditions on the launch site necessary to start the launch campaign are met. The integration facilities on the Cosmodrome - called MIK - must be ready, empty and in clean room condition to receive CryoSat, the Plesetsk Control Centre has to be properly connected to the rest of the world - in particular to ESOC in Darmstadt, Germany, that will run some important (remote) tests with the satellite while it is in the MIK, and will take over CryoSat control after release from the upper stage of Rockot. On Monday and Tuesday team members will visit the airport in Archangel to see if the facilities to unload the containers from the Antonov cargo plane and transport them to the train are ready. Upon their go-ahead the cargo flight will take off from Munich.

While the team was rolling towards north (the train trip takes nearly 18 hours), another essential precondition for our schedule being in time was fulfilled. The Russian Monitor-E satellite for remote sensing of the Earth's surface was successfully launched from the Plesetsk Cosmodrome at 22:34 local time on Friday night. The MIK was used before by Monitor-E, so now it will be free for us.

Today the containers will be moved in a convoy from IABG in Ottobrunn to the airport in Munich. They will be stored in Hangar 4 for the night, awaiting the Antonov next morning.

This evening I'll squeeze the rest of my stuff into my suitcase for my flight to Moscow tomorrow morning. I hope it will not be too heavy!

Tuesday 30 August – On the way to Russia

Traffic jams meant I only just made it to Schiphol airport in Amsterdam in time. Luckily my flight to Moscow went smoothly. In the meantime the CryoSat transport preparations in Munich went according to plan, the containers had been brought from IABG to the airport the day before, and now the Antonov was loaded. It left Munich shortly after four local time heading towards Archangel.

At the airport we were picked up by Alex from Khrunichev, and brought with a Khrunichev car to Yaroslavskaya train station, over crowded roads in Moscow. No time for sight-seeing. As planned we met our colleagues from Astrium Friedrichshafen in front of the station - at the Lenin monument. Train 316 was waiting, we entered wagon 12, where we had our reserved sleeping compartments, and half an hour later the incredibly long train left towards north. During the ride Cyrille called from Archangel, and I heard that the cargo plane had arrived. Good news. Quiet night on the train, interrupted only by occasional brakings, shaking one awake for a short time.

In the morning, the landscape moving by outside the window is pretty much the same as the evening before: forests of birches and conifers, sometimes interrupted by clearings with small villages and many houses made of wood. Must be pretty tough in winter. When there is a larger town, one often can see a rough industrial landscape.

Cyrille calls up and reports that customs formalities in Archangel went smoothly, and that now the containers would be transported to the train station. The train will depart late at night from Archangel.

Transport by train can only be done during the night, as it has to go very slow and has to use the general track, otherwise it would block the regular traffic. This is good news.

We arrive in the early afternoon at Plesetsk station, according to schedule. Some colleagues already expect us - Bill Simpson and Thomas Schuler are here since end of last week - plus some Khrunichev personnel. We go with the bus to the nearby town of Mirny, where the Hotel Rockot is located. We are passing the road control which makes it very clear that Mirny is a military place. This also is highlighted in the safety briefing we get after check-in. We receive our badges which we have to wear, and are informed about the allowed ways outside the hotel. Basically this is the path along the lake and back via the main road with a short excursion into the market area, or, effectively, the other way round. Then we have lunch, after that in a planning meeting the detailed plan for tomorrow is discussed and agreed.

The main thing for me is that Martin, Karl and I will take over from the team accompanying the satellite since Archangel upon arrival in Plesetsk early tomorrow morning and go with the train on the last part until the Cosmodrome.

The alarm rings early. Martin Diener, Karl Honnen and I will go to the Plesetskaya train station to wait for the train with CryoSat arriving from Archangel. In the bus we have telephone contact already and know that it is approaching. We are in time, at a quarter to seven, to see the train majestically (and very slowly) roll in.

A tired bunch of colleagues are leaving the train: Bernard Weymiens, Klaus Jäger and Klaus Haas had accompanied the containers from Munich, having a memorable ride on the Antonov; Cyrille Lusteau, Friedrich Adler, Sergei Galitsky and Armin Seidler were part of the advanced team and went from Plesetsk to Archangel by bus two days before to inspect the airport. York Viertel had flown to Archangel directly.

Martin, Karl and I enter the train. First the train now needs a diesel engine, because the rest of the way to the Cosmodrome, about 40 kilometers, is not electrified. So after the engine is changed we continue our journey. During the next stop the status of the spacecraft container is checked, everything is okay, and some rail cars at the end of the train now can be taken out. They were required by Russian authorities to separate the last wagon which had been classified as dangerous for the public rail track. A second stop is needed, where we get another, lighter diesel engine. During the last kilometres the train is riding in walking speed. Finally it is nearly 1400 when we arrive at the MIK. The rest of the afternoon is dedicated to unload the containers in the big general hall of the MIK. Two rail cars are pushed into the hall at a time, and the containers are taken by big cranes, operated and supported by soldiers. A status meeting concluded the day.

We ride back to the hotel in the bus, which will be our daily transport from now on: 40 minutes one way.

Friday 2 September - Getting into gear

This is the first day when the complete team leaves the hotel in the morning and is brought with a bus to the MIK, our daily workplace. This is a somewhat bumpy and long ride - it takes about three quarters of an hour - and you have to make sure that you have some entertainment: some are plugged to their music players, and I am one of the few lucky ones able to read without a revolting stomach.

Not too many things can be done today - according to plan. First the basics have to be set up, and from there the activities will build up. We start to unload the containers, some equipment like major mechanical support equipment and some elements of the electronic support equipment can be transported already to hall 101A, where then the satellite will be located for the next weeks.

In the big general hall also there is waiting our Rockot launcher, which will lift CryoSat into its orbit, resting in the big transport tube, and still without the Breeze upper stage. No photographs are allowed there.

In parallel to the activities in the big hall the offices on the first floor are populated, office equipment is set up, internet connections are made and broken again. It will take a while until the daily routine is established.

After the evening meal Bill is caught by the idea of assembling one of the fitness machines we have brought. They were nicely taken apart before, unfortunately at connections which should have remained fixed. Finally we manage to put the rowing machine together.