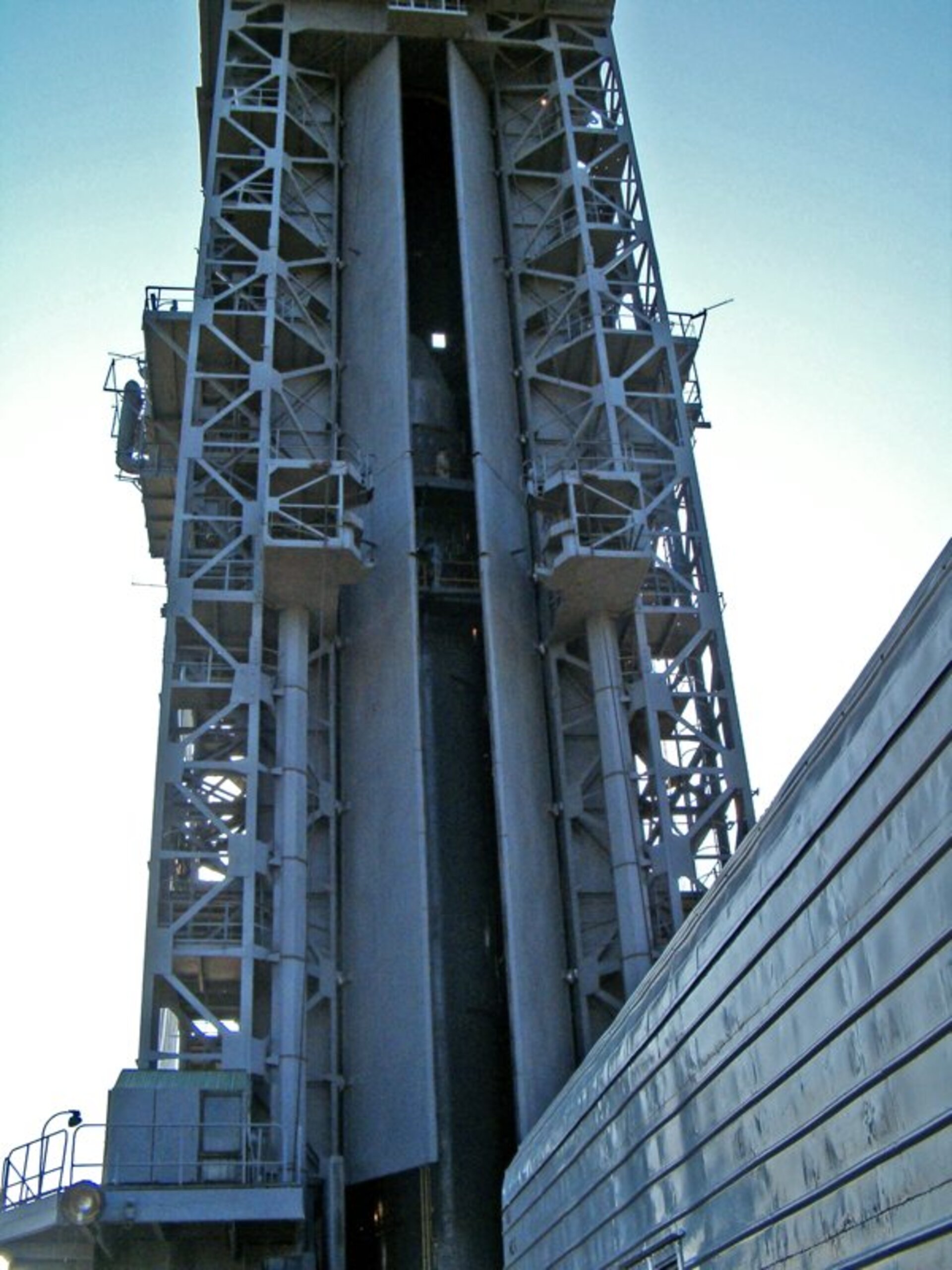 The satellite is in place, the launcher stands ready. Now, as the final members of the CryoSat team make their way to Plesetsk, the final dress rehearsal for launch is about to begin. ESA Launcher Interface Engineer Kurt Büchler continues his online diary of events.

Today the spacecraft tests on top of Rockot are continued. Any time the spacecraft is switched on, the battery is also charged. By the end of the day it should be full and ready for the launch.

I think I will no longer have any opportunities to take further photos of the launcher with CryoSat on top. The last I have seen of CryoSat itself was during encapsulation one week ago, and the complete launcher I saw the last time - hopefully - during our visit to the launch tower yesterday. There is no reason now to return to the launch pad, as the undertable room equipment is installed and works as it should. Soon the launcher will be fuelled. This should happen Thursday, and from then on you avoid getting near to it anyway! So in the MIK we have progress as planned.

Today I have the task of meeting our new arrivals at Plesetskaya train station. We expect Guy Ratier, the ESA CryoSat project manager together with his industrial counterpart, Uwe Mallow from Astrium Friedrichshafen. On the launch day they will be in the Control Centre MCC and will give the go-ahead for the launch. Therefore they also have to be present for the so-called dress rehearsal on Wednesday. This is a full walkthrough of the launch procedure with the original timeline and all parties involved: ESOC, the EGSE room in the MIK, and of course the MCC itself.

Time for a walk in the morning, then going to Plesetsk with the bus. The train arrives in the early afternoon, our bus is at the station half an hour earlier. There is the local market nearby and I stroll through it. The market is larger here than in Mirny, and the Russians that accompany us prefer to buy here. There are a lot of mushrooms, fresh and pickled with salt, also buckets of cranberries.

Guy and Uwe, accompanied by Danilo Muzi, Jürgen Frank and Andrey Fionov, arrive well. Back in the hotel they get their obligatory security briefing, and then I take the foreigners to a Grand Tour (as you can imagine, this is the standard route ...)

In the evening we sit together to discuss the preparations to be done tomorrow for the dress rehearsal on Wednesday.

Today we are a larger group with our newcomers, but not all of us stay in the MIK. Some are leaving for the MCC to actually have a rehearsal of the dress rehearsal tomorrow: checking all connections, get acquainted with the location and the seat arrangements and so on. It is a relatively small room there, and it has to be ensured that everyone in the MCC knows what to do and how the communication lines are going. For the launch we have Guy and Uwe there, supported by Cyrille and Klaus, who will be in constant contact with the EGSE room in the MIK, where Bill, Reiner, Manfred and Martin will be on the console until launch. I will be in the MIK on the day of the launch.

In the morning another spacecraft test was started in the EGSE room, ending in the early afternoon. ESOC listened in, thus checking the integrity of the monitoring lines and the voice link. Everything went fine, so it looks good for tomorrow.

I stay in the MIK. The rest of the team is busy getting stuff out of our previous clean room into the containers which are stored in the main hall. Hall A is not a clean room anymore, the air conditioning and the filters have been switched off; the big doors are open to allow the transportation of boxes and equipment into the main hall. I remember the days in early September when we started to fill up the clean room. Time has gone fast.

Back in the hotel we have a meeting together with our MCC representatives. We go through the launch manual, worked out by Bill, step by step. I learn that now the countdown clock indeed will show the time to lift-off. This is a change, before we had a countdown to an internal launcher parameter 14 seconds before lift-off.

I also can say hello to Alexander Seregin from Khrunichev, who came from Moscow to attend the launch. It is a pleasure to see him again.

This is another quiet day, something to catch breath before next week which presumably will be very hectic. The only activity we have as a particular item today is to check that the ESA-CryoSat logo has been applied to the fairing. It basically will be visible in the last minutes before lift-off, when the service tower is retracted from Rockot and the launch tower proper. Then the upper half of the fairing can be seen sticking out of the transport and launch container. It has to look good for the official photographs!

Wolfgang steadily continues packing stuff in containers and preparing the transport back home. The Upper Composite has been transported to the main hall. It carries the thermal cover which it also will have on Saturday, when it will be rolled to the launch pad.

The thermal car, that will accompany it, produces a constant thermal clean environment by means of powerful generators. This makes the transport independent from nearly all weather conditions. Everything is connected and running as a test for Saturday. Also the electrical connections of the Breeze itself have been checked today: Status green. After that the Upper Composite is brought back to clean room B.

So these were the minor issues. The big one today: Astrium has invited everybody for Kässpätzle. This probably needs some explanation. Kässpätzle are a specialty of southern Germany. Main ingredients: flour, eggs, cheese, onions. A simple recipe, a lot of work: the dough has to be worked on, pressed through a special sieve into boiling water, onions have to be prepared (and you know what that means!) cheese put over it, put in the oven ... And all this for about 40 people.

There is really not much I can report for myself today. I have volunteered to help pack the containers which have been stored in front of the hotel. The main items to be put into them are the fitness machines. So the last days I have to do without them, which is a pity, I got quite used to the rowing machine and the cross trainer. Heavy stuff, but with Wolfgang, Fritz and Jürgen we manage.

I also start to pack my own stuff, after all I'm already leaving on Sunday, if everything goes well. I have a big aluminium box to be sent back with the main transport. In hindsight I have taken too much with me, clothes, something to read, musical instruments, computer games and so on. Twice as much as I could actually use, but we had such a condensed schedule that there was not much time to do things on the side.

The EGSE team and the MCC team today have the so-called dress rehearsal. This is the practice exercise of the launch day, complete with all parties involved, including all the communication lines and spacecraft commanding and monitoring in real-time. This is a vital check to make sure that on the launch day the timing is right, the various locations (ESOC, MIK, MCC) understand each other, both as regards the communication links and the terminology used.

The dress rehearsal is a success, as I hear in the evening (of course some minor inconsistencies could be detected and cured). Also the Russian 'State Commission' for the launch, consisting of high-ranking officials of the Space Forces and of industry, considering the status of the launcher and of CryoSat, have given the go-ahead to fuel the launcher tomorrow. So we are heading for a launch on Saturday!

Yesterday the go-ahead was given for the fuelling of the Rockot launcher. This will be done today, and during this time no operation at all with the spacecraft is permitted. So we use today to continue packing. In the morning the containers that have been stored in front of the hotel during the last weeks have been transported to the MIK, and now Wolfgang, Fritz and Klaus H. are trying to pack in the same order as before.

The dress rehearsal of yesterday is reviewed, there are some improvements and small corrections to be added, and then the procedure is rounded off.

In the evening I have dinner with Bill, Cyrille, Klaus and Danilo. Last opportunity for an evening out, tomorrow I'll stay in the hotel, next day is launch, and on Sunday I'm off!