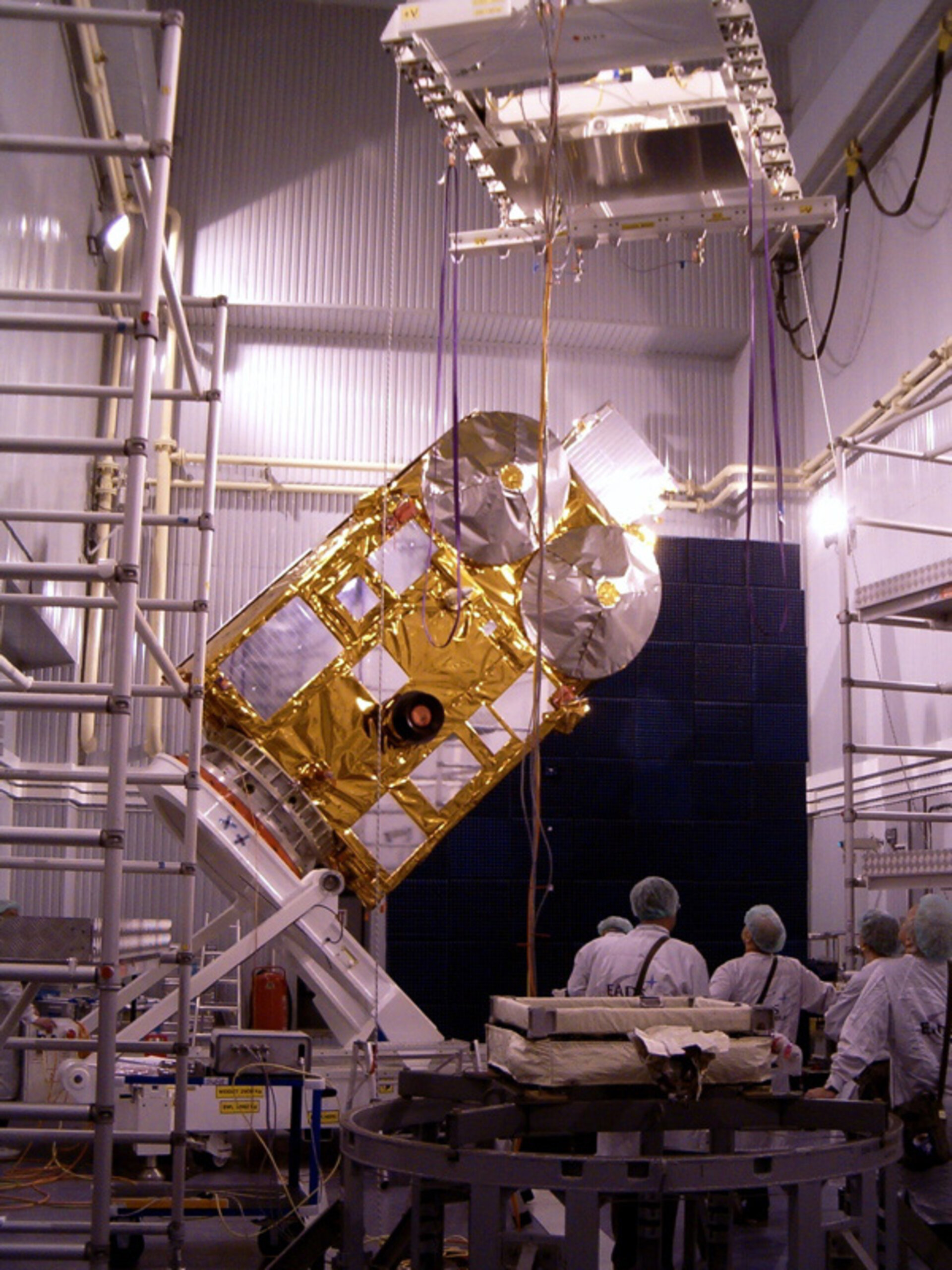 There is worldwide interest in the launch of ESA's CryoSat mission. As final preparations are made for the satellite to be mated with its Breeze-KM upper stage, ESA Launcher Interface Engineer Kurt Büchler recounts how the close-knit team at Plesetsk Cosmodrome find themselves joined by members of the press.

Today is for certain the busiest day we have had in the campaign so far: CryoSat will move out of our clean room A into the adjacent one for mating with the Breeze upper stage. For the afternoon we also expect a group of journalists, who were invited by Eurockot and ESA to visit CryoSat on top of Breeze.

Today they will be informed in the MIK about the mission and the satellite; Duncan Wingham, the CryoSat Lead Investigator and quite a few other representatives from ESA and industry will give an overview.

The room where I have my desk is the largest one. During the big testing activities it was full of engineers, but now only a few people are using it as an office. So I have to move out of it, because it is the designated briefing room.

Later the journalists will see the launch tower and the control centre. Their visit in the clean room is only planned for tomorrow, and if we can keep the schedule, this will be just the right day to have impressive photos!

The first job in the morning is to position CryoSat vertically, so that it can be moved over to the cylindrical frame with the spacecraft adapter on top of it. The satellite lifting frame is taken on the big crane hook, four slings are fixed to it and are connected to hoisting points on CryoSat.

This takes a while but finally the satellite is disconnected from the multipurpose trolley, hovers on the crane and then is placed onto the adapter, carefully witnessed by the Russian specialists.

A vital task now is the verification of the electrical interfaces between the adapter connector and its satellite counterpart – best to find out now if a line is wrong! The other important activity to perform is the mounting of the pyro devices, mechanical actuators which open the connection between the upper stage and CryoSat when its destination orbit is reached. Pyros are explosive, so care has to be taken.

Now this ensemble is transferred from the cylindrical frame (which allows work under the satellite) onto a rail car. From there it is rolled to clean room B and leaves A for good!

Most remarkable, I find, is the adjustment of the thermal insulation blanket (called multi layer insulation or MLI). These - as we normally use them - are the gold or silver coloured blankets covering a satellite. They can be seen in their full beauty on CryoSat. The Russians use multiple layers as well, but the outer layer is a thermal fabric which is actually sewn!

The best and most experienced Russian specialist is a lady, 81 years old. I watch fascinated how she kneels down, crawls under the satellite and sews a tailored MLI.

This all takes the whole day. The colleagues will work on till late at night, but I have to leave at this stage because we have an invitation for a dinner with our guests, the journalists and their hosts. So I do not see the final step of putting CryoSat onto Breeze and have to wait until next morning!

It is somewhat hectic this morning. Journalists are waiting in the lobby to accompany us to the MIK and will have a guided tour in the clean room, where CryoSat can be seen on top of the Breeze upper stage. No other activity is planned for this morning.

The journalists are divided in groups of five, as otherwise the clean room conditions would be very difficult to maintain. Every person entering brings inevitably dust and other contamination, so we try to keep the total number of visitors as small as possible at any time.

Still, each group has a guide, and in the clean room they are introduced to CryoSat and the Breeze. York Viertel, Duncan Wingham and others are ready to provide information and explanations. So the number of persons present in the clean room certainly is much more than we normally would allow and of course the period of the press visitors will be clearly seen later in the measurement diagrams of the facility's environment. However, at this stage this is acceptable: CryoSat is sitting a few meters high on top of Breeze and is not being directly exposed.

So there are three hours of frantic activity, interviews are going on in our corridor and in the clean room, until suddenly everyone disappears. They have to catch their plane leaving from the Plesetsk military airport to Moscow.

All of the sudden the corridor is empty again. It takes a while until the normal activities are continued. In any case there is not too much to do for our team. Work is done mainly in B where again the old lady adjusts the MLI with needle and thread, but this time up on a ladder!

We are back earlier than normal in our hotel. The team has finished the day and has achieved a milestone with the delivery of CryoSat to Breeze. We are on schedule again: based on a common effort by the Russians and our team we have recovered the delay from the middle of this week.

Still it was a tiring week, and we look forward to tomorrow's activity: the visit to the Kenozero National Park, east of Plesetsk, direction Finland. As most of us will participate (only Sean, Karl and Martin leave tomorrow, and Cyrille decided to have a day's rest, but all others go) we have to get up very early. The departure will be six in the morning, because the bus ride takes more than four hours one way!

I get out of bed a quarter past five, the busses to Kenozero National Park are leaving at six in the morning. We have also guests from our other partners in the launch campaign, Khrunichev, Zerkt and the Space Forces, who take the opportunity to visit this national treasure. Some of them, I hear, have not been in the park at all. So it is nice that we are the occasion for their visit.

Kenozero National Park is a huge area in the west of Plesetsk, in the direction of Finland. It is about 200 kilometres from Plesetsk. Most of the route is a gravel road, so the real speed is not very high, but it certainly feels like it is ...

Halfway the trip we cross the Onega river on a ferry that is driven by the river itself. The ferry is oriented oblique to the flow and is pushed to the other side. This goes very calmly.

After further two hours we arrive at Lake Kenozero. Once out of the bus, we climb a little hill nearby with a wooden chapel on it and have a look around. It is a breathtaking view: the Lake, taiga woodlands and a few village houses here and there. It is full autumn here, and the trees show bright and shining colours. We will see much more of nature in the course of the day. But first we get a breakfast in the near the visitor's centre from where we start our tour.

We are transported to a tour boat with which we go to all sightseeing places today. We cruise around the Lake, visiting a few of its many islands, each with various chapels and local stories full of religious belief mingled with superstition. We hear many such tales from our local tour guide. She is so full of stories and talks so quickly that our female translator hardly can keep up with her.

Many of the small picturesque villages are abandoned or have only very few inhabitants. Back in the tourist centre we get a rich dinner, mainly with fish from the Lake. We have to go now: the trip back takes again more than four hours! This was a wonderful day and I hope that I'll return!