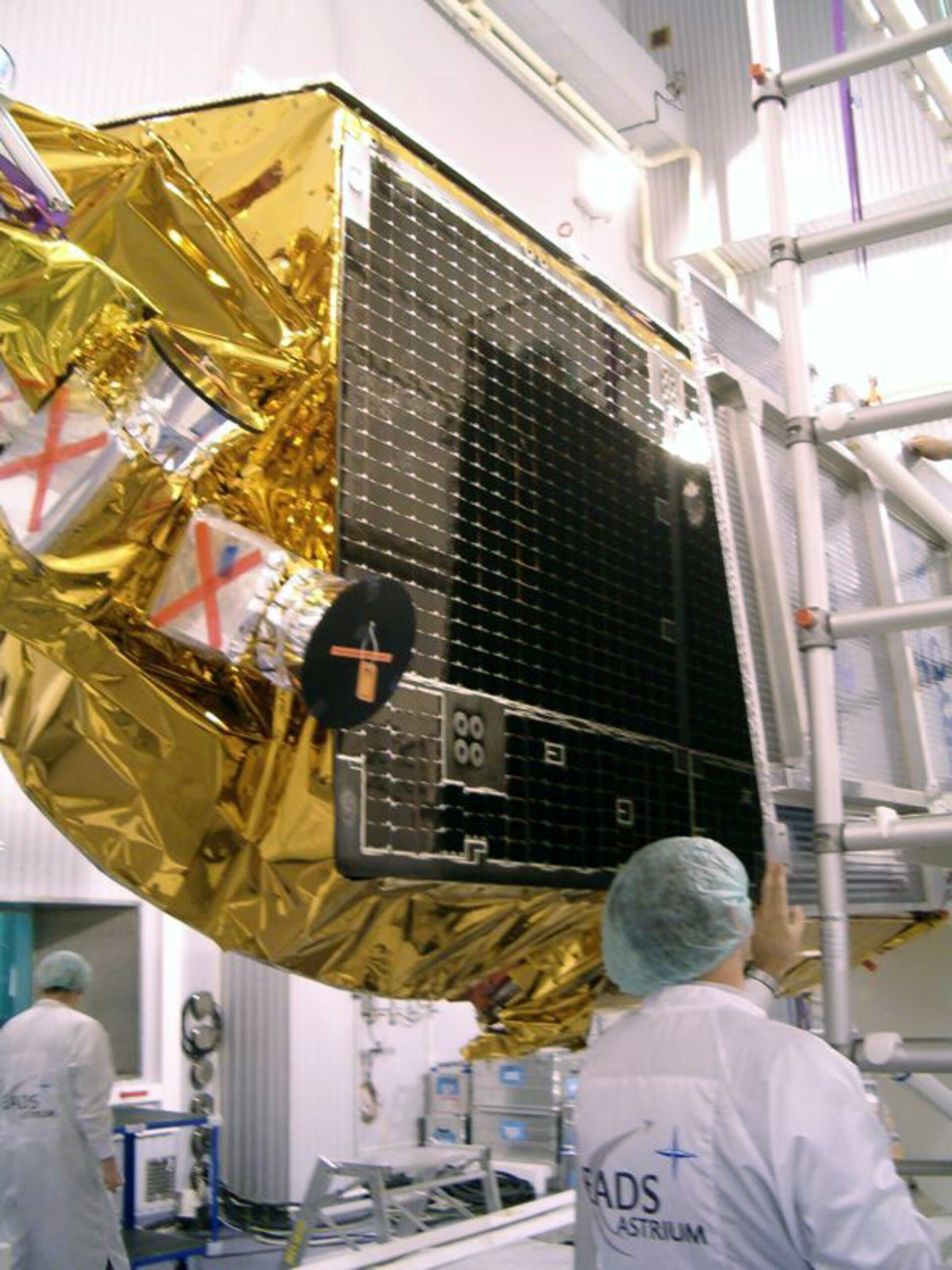 Updating his CryoSat launch diary, ESA Launcher Interface Engineer Kurt Büchler explains how the delicate spacecraft is turned on and carefully checked for any signs of damage occurring during transit.

Today is planned the first steps in the clean room. First the Solar Array has to be checked for broken cells. This may happen during transport, as the cells are pretty fragile. It is not unusual that a small number of cells are damaged, but in most cases this only affects the glassy outer layer and does not influence the performance. As the inspection is a visual one, the protective covers of the array have to be removed. These are two light but rigid plastic plates that cover the array which is shaped like a roof - obviously without touching the segments. To remove them, the respective array has to be in a vertical position. So the multipurpose trolley is used again to rotate CryoSat as required. One would perhaps not expect that the colour of the cells is rather black than blue.

The damaged cells before transport are well known and are marked in a "map" of the array. Now Klaus, the product assurance engineer, is searching for newly broken cells. In spite of a strong torch he doesn't find any additional ones.

In parallel the satellite is switched on with the help of the EGSE - this stands for 'electrical ground support equipment'. It may seem only a small thing but the simple switch on (actually it is a whole procedure and is not so simple after all!) gives the first indication and confidence concerning the good status of the satellite.

Both facts together - the satellite being switched on and the solar array being uncovered - can be used to acquire information about the solar array: the room illumination produces a voltage level. To modify the input continuously the spacecraft is moved by the multipurpose trolley (and again some remarkable views are the result).

This was another step forward for the project. We are back at the hotel at the usual time, about a quarter to eight, and have dinner. Most of the colleagues are in bed early. So am I.

In the morning Fritz tests the thruster system of CryoSat for leaks that might have been caused by the transport. CryoSat's main attitude control in orbit is performed using high pressure Nitrogen thrusters. The tanks will only be filled with fuel prior to encapsulation under the Rockot fairing. However for the transport they have a protective nitrogen filling to keep air and humidity out. This gas also contains a small amount of helium mixed in it to enable leak tests. Helium passes through leaks quicker than other gases and moreover is easily detectable with a helium 'sniffer'. There is no leak.

Today the main activity concerning the satellite is one where you actually cannot see too much. It is the AFT (meaning Abbreviated Functional Test) which basically is carried out from the EGSE room with some supporting manipulations on CryoSat, - e.g. applying the stimulus for the star tracker, an important subsystem to help determine CryoSat's attitude in orbit. The main chains of subsystems are functionally checked: data recording and management, attitude and orbit control, telemetry and telecommand, and the instruments DORIS and SIRAL. The results are as good as expected. However, the functionality is only demonstrated for one 'side' of the satellite electronic system, the A-side. All subsystems do exist twice, in redundancy, either as a complete unit or as additional boards in the electronic boxes, called side B. These have to be tested as well. This is planned for tomorrow.

In the regular joint operations meeting in the afternoon (where all parties do coordinate the plans for the next day) I take the opportunity to ask for a visit in the airlock, which would normally be off-limits for us, because there the upper stage of our launcher (the Breeze-KM booster and the fairing) is assembled. Access is granted and together with a few colleagues we have a guided tour to the activities. The upper stage is assembled and will be brought soon (without CryoSat) to the launch tower and lifted on top of the rocket, to be sure that everything fits. It will then come back for our spacecraft.

It is a strange feeling to imagine that soon CryoSat will sit under the tip of that rocket.

The weather forecast is not good, and this proves to be true during the day: It rains quite a lot, and on the way to the Cosmodrome I can see that some of the leaves of the birches slowly turn to yellow - autumn is coming. Against this, I hear that summer in Holland has returned, with blue skies and high temperatures...

Concerning the satellite, this day can be called uneventful. Basically the Abbreviated Functional Test is repeated for side-B, with the same procedure as the day before, and the hardware activities performed yesterday - leak testing and star tracker stimulation - do not have to be done again. So there is no point in taking photos of CryoSat, as it looks the same all day.

As this test can be done quicker than yesterday, we are finished earlier. The test planned for tomorrow cannot be advanced, because we have to wait for our specialists -Fabio, Karim, and Constantin together with specialists from Astrium Friedrichshafen and CNES - who arrive this afternoon in Plesetsk. So we close business earlier and are back in the hotel around five already. There is a big welcome between us and the newcomers, most of them take a walk in Plesetsk (actually the town name is Mirny, however the Cosmodrome and the train station is Plesetsk, a little bit confusing, this, I admit). I use the fitness machines.

The evening is marked by the birthday of Martin Diener - the next one, I'm eager to see how many birthdays we will have in the end - and the introduction of the newcomers in the team (with some French wine).

Tomorrow will be an exceptionally long day, and we have arrange a shift with overlapping times, the working day is planned from 8.00 to 23.00. I'll be in the late shift.