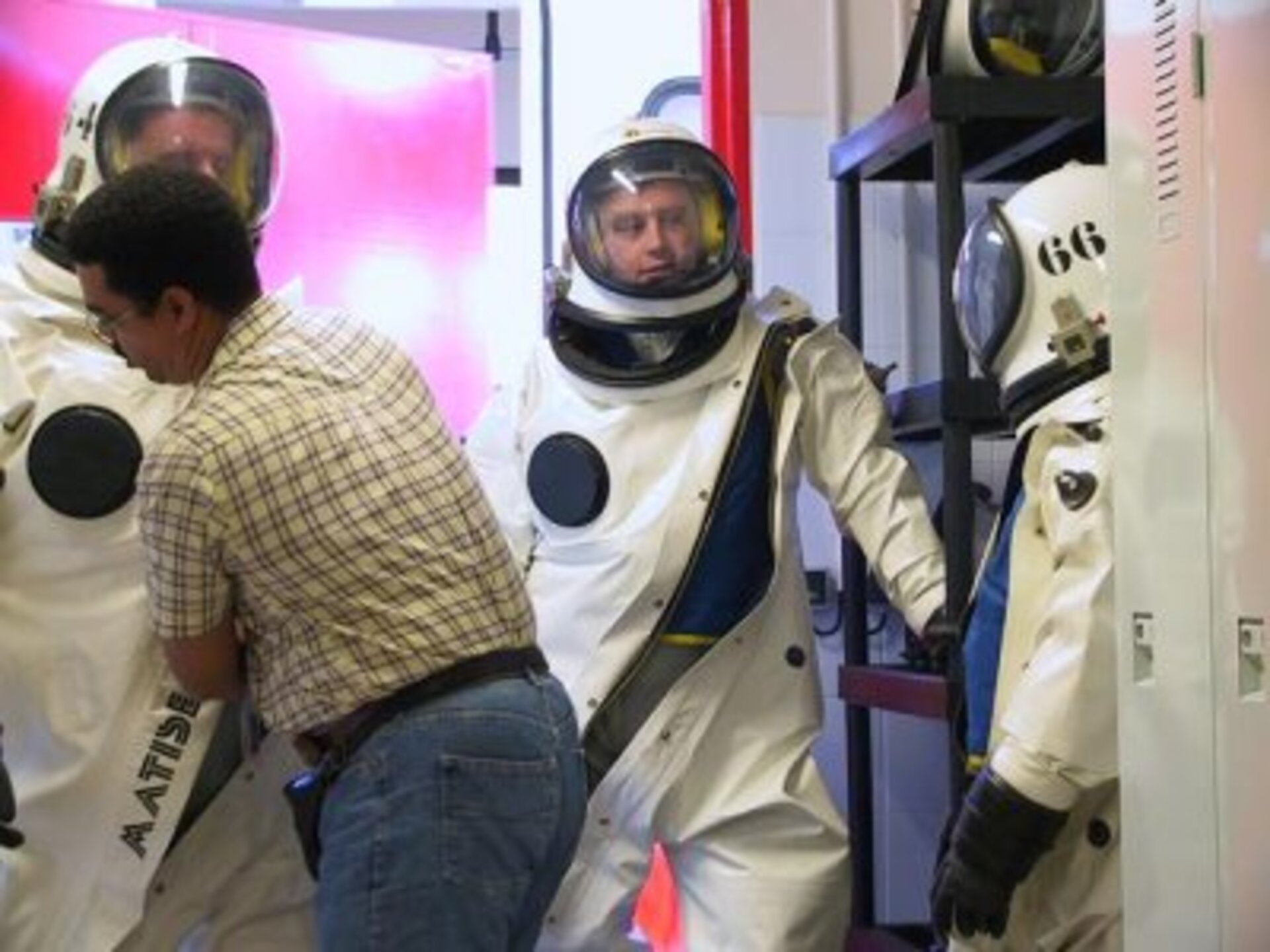 The 6 space-suit sessions are over. The filling and the pressurization of the tanks are completed. The tanks now contain 314 kg of hydrazine. Yesterday morning, in about two hours, the four tanks were pressurized at 19 bar with helium. And today, after temperature stabilization, the pressure was readjusted. The fuelling room was re-open to normal use, with a gas mask at hand. In time left by the fuelling, the protections of the thrusters of the service module were removed and their thermal protection put in place.

On the launcher side, the electrical checks of the upper part of the launcher and the pressure tests of the propulsion circuits of the second stage proceeded satisfactorily.

Two sessions in space-suits took place today, as planned. The four tanks of the satellite are now full. The fuelling was perfect. This afternoon the fuelling equipment contaminated by hydrazine was evacuated for decontamination to a specialized zone in the Space Centre in French Guyana. That does not mean that the fuelling activities are totally over. Two additional space-suit sessions will be necessary to pressurize the tanks. These will be on Saturday and Sunday.

Functional tests of the Vulcan engine of the first stage of Ariane 5 proceeded satisfactorily.

The start of the fuelling activities were really difficult: Yesterday the voice communication system did not work. We borrowed another one from the Ariane 5 Launch Control Centre. Last night the principal and emergency air compressors went down one after the other. Fortunately, the cause of the breakdown was easily identified and corrected before we started again this morning. Two valves in the heater cooling circuits did not close completely because of deposits left by water. The fuelling activities progress now normally. This morning, the hydrazine flow rate was adjusted and samples of hydrazine samples were taken. This afternoon, two of the four tanks were filled.
The checks on the second stage of the launcher are all nominal.

Envisat is now in the hands of the fuelling teams. The start of fuelling is difficult. The first session of space-suit had to be interrupted because of a failure in the communication system. Two of the three members of the team could not communicate!

The launcher activities started. The second stage was fitted on and connected to the first stage. The checks are in progress. Everything is nominal so far.

Despite some rumours heard these last days, the launch date on February 28 was confirmed by Arianespace this morning. The second stage of our Ariane 5 arrived on time in French Guyana and the complementary tests performed on engines in Germany have all been satisfactory. Authorization, and order as well, to proceed with fuelling was given.

Today was also a great day in the clean room with a series of "lasts" : last rotation to vertical, last use of the main integration stand, last day in S5A. As a matter of fact, the satellite was rotated from horizontal to vertical, then moved toward and landed on the air-cushion pallet, then pushed trough the corridors and airlocks towards the fuelling hall and last put on the stand where fuelling will take place. Now, Envisat will remain vertical till launch.

The success of the final countdown rehearsal is confirmed: in the simulation, the satellite was launched on time, without any major problems.

The second stage of our launcher, the one which failed during the last Ariane 5 launch, arrived in French Guyana last Saturday. The erection of the complete launcher may now proceed and be on time for our launch.

Today was devoted to small preparations prior to fuelling: removing some protection, finishing some thermal blankets, electrical connections and a touch of black paint where it was patchy.

The simulation of the countdown went without too many problems. There are some details to be added to the procedures and some changes to be made to the communications but these modifications are not very significant.

First, the Flight Readiness Review of ENVISAT took place and was successful. The satellite was declared ready for filling the tanks. I told you a few days ago that the payload did not have any unresolved anomaly. The platform has only one and very minor: there is a small chip in an area of black paint!

There were only bright smiles in the clean room today. First of all, all clean tents on optical instruments have been removed. Only the AATSR clean tent remains in place. Second, the plastic bottle which protected the DORIS antenna (our localization system) was also removed. The satellite really starts to look like a flight satellite. As for the service module yesterday, two functional electrical tests were performed on the payload module, one with the main circuits, the other with the redundant circuits. At last: there is no one anomaly, even very tiny, in the whole payload which is not solved and corrected. The payload is 100% nominal.

Dereck Todman, the project manager on industry side, had yesterday the traditional very short haircut. This was accompanied by a charity collection. This is a kind of ritual initiatory celebration intended to attract the goodwill of the Gods of Space. For the ritual to be really complete, one of the heads of the ESA team has to have the same short hair cut. I am not allowed to have the cut : my hair is already 4 mm long!